Fishing Villages of the East Coast One of my favourite parts about the east coast of Ireland, is the collection of villages dotted up and down the seafront – each with their own unique atmosphere and relationship with An Fharraige. You have the huge trawlers which heave in tonnes of fish each and every day, and the little rowing boats that bob out of the marina and can return with just a couple of mackerel and a truly delighted captain.

The locations below are all wholly charming in their own way, and each offer their own interpretation of what it is to be an Irish fishing village. However, what they all have in common is the sharp scent of sea spray in your nostrils, breath-taking views for your eyes to roam, and an Irish welcome that will warm your heart.

We’re going to start close to home this time (for me anyway), with a visit to Dublin’s Howth – which was established as a fishing village and port back as far back as the 14th century.

The harbour itself features two piers – east and west – each of which enhances this charming little village in its own way. You’ll see colourful little fishing boats bobbing in and out all day long, nets being mended, and catch being hauled ashore - making for a picturesque shot of the traditional life that is lived here. You could probably see a fish being caught in the morning and have it on your plate at one of the delicious seafood restaurants that border the harbour for lunch. 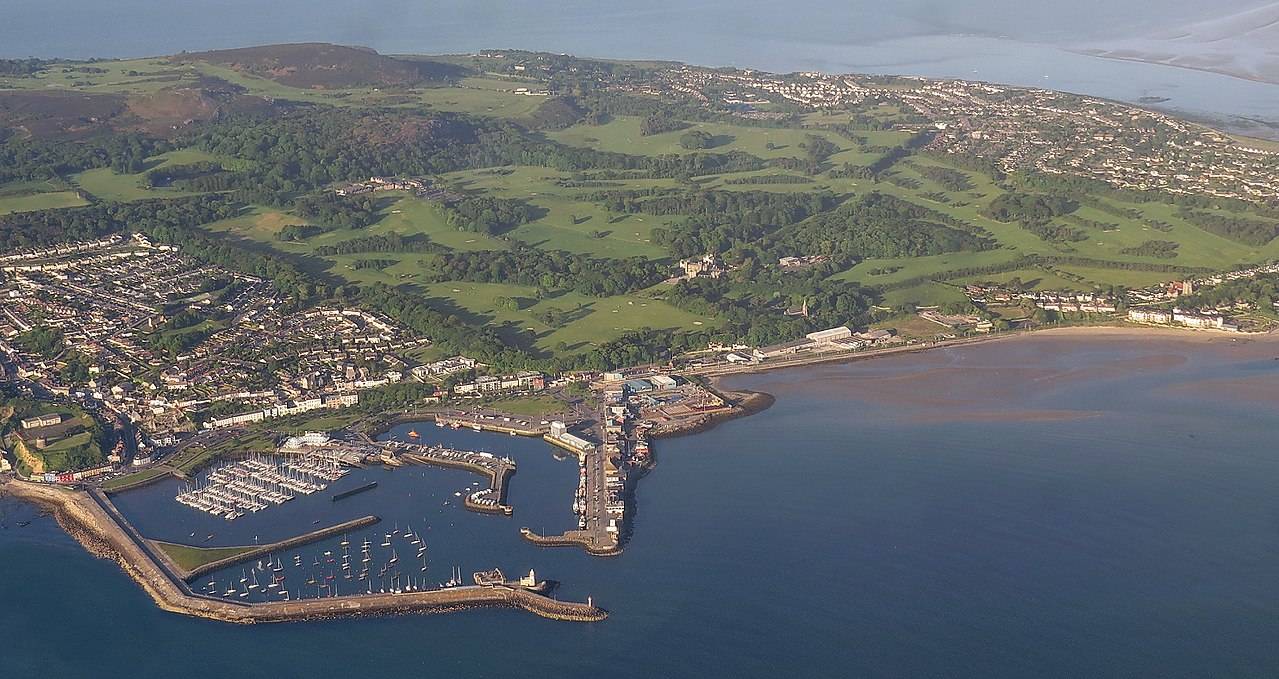 It is said that King George IV was so enamoured with the place that he had his footprints carved into the ground near the West Pier. These prints are still etched on the stone today, and have encouraged many a curious tourist to stop by and have a peek – including the English Royal Family themselves!

While we’re in Dublin, we may as well do a bit more exploring and travel down to the perfect chocolate box town of Skerries - full of crannies, coves, and brightly coloured cottages. 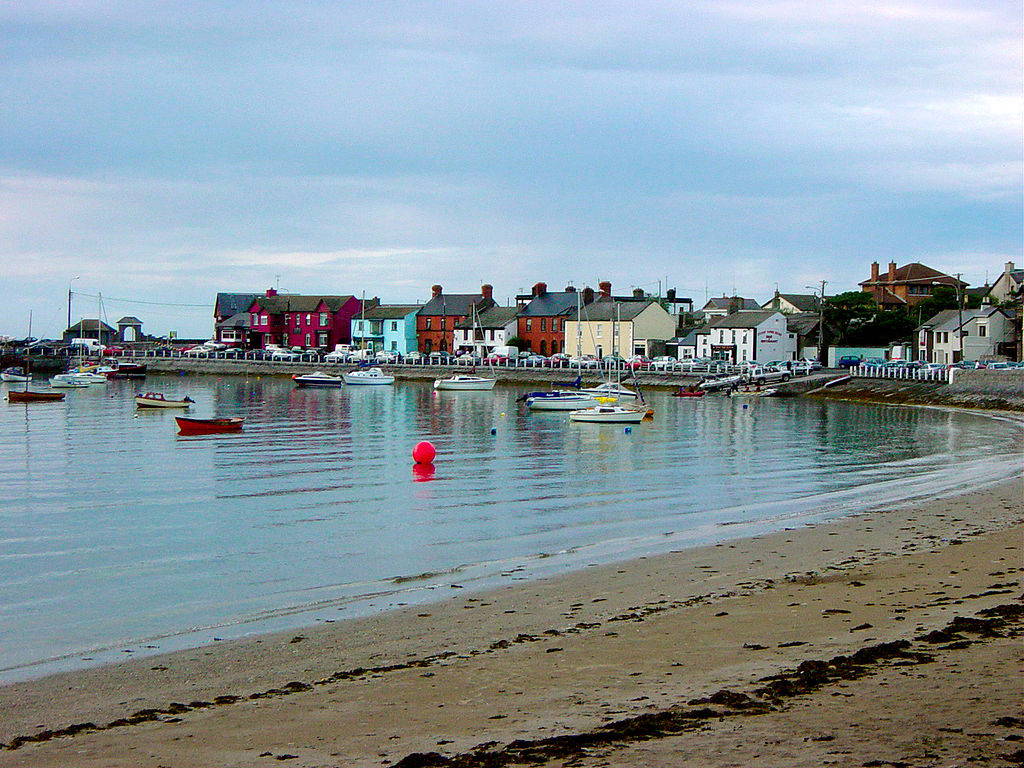 You’ll get a truly welcoming reception from the locals, who in 2011 became the only community to receive an RTÉ & Rehab's People of the Year Awards, as well as being voted the tidiest town in Ireland in 2016.

Once you tear your eyes away from the lovely land-based sights that this town has to offer, you can cast them out to the open sea, which is adorned with not just one, but FIVE small islands to drink in. They are mostly uninhabited, but two of them (Shenick and Red Island) each house one of Dublin’s iconic Martello Towers.

Waterford’s Tramore started out with simple origins as a fishing village, but business boomed upon construction of a railway in the 19th century, and it now boasts the largest population on this list (which is still not much more than 10,000, to be fair).

It’s a typical spot for local tourists looking for a seaside getaway, with its name literally translating as “great strand”. Stroll down the promenade with an ice-cream as you take in surfers, anglers and swimmers – all delighting in being at one with the sea. Or if you’d rather exert your legs a little more you can explore the sands and cliffs with one of the many scenic walks that Tramore has to offer.

It’s famous for its mackerel and bass, and there are many opportunities to try the life of an Irish fisherman for yourself. However, if you’d prefer to see your seafood on a plate rather than the bait, there are plenty of excellent restaurants to choose from - ranging from cosy and casual, to classy cuisine. 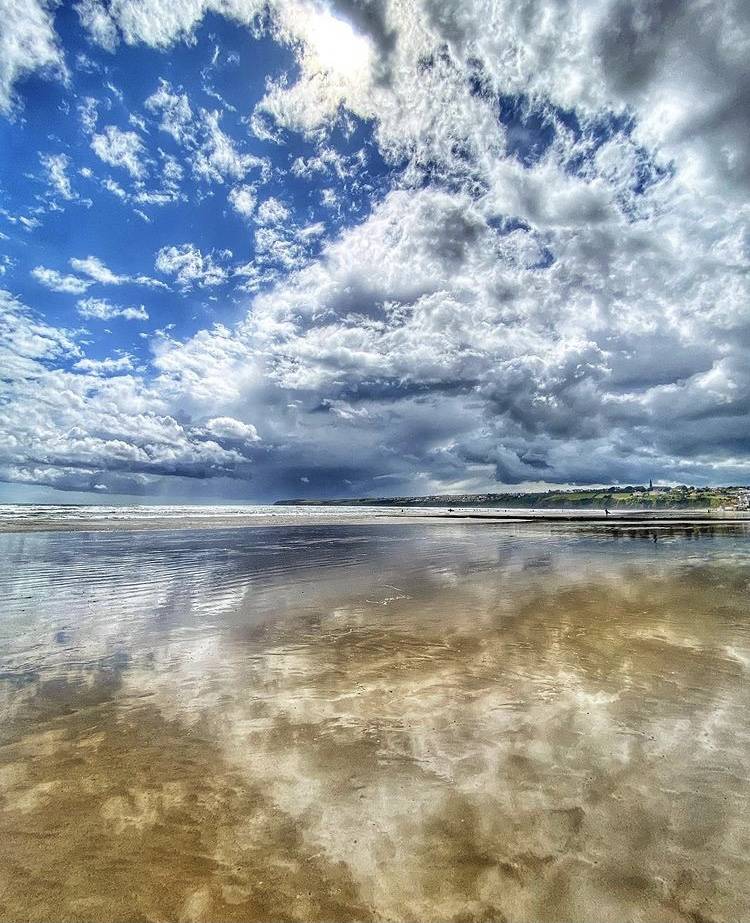 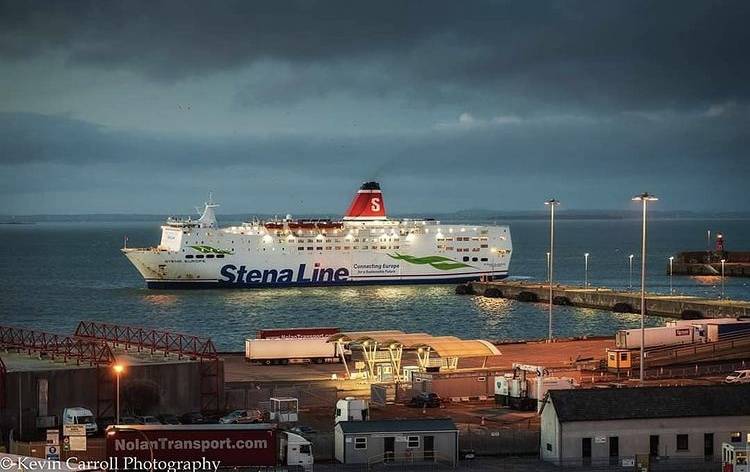 The Wexford village of Rosslare Harbour was created to support the harbour of the same name (now called Rosslare Europort), which in turn was named after another more sizeable settling around 4km away. Due to its location on the East Coast, the port is geographically the ideal spot in the Republic of Ireland for reaching the UK and mainland Europe – making it a hot spot for ferries full of passengers.

It is occasionally known as Ballygeary, which is the closest village to the harbour itself, and the populations are now counted as one – which amounts to around 1,200 locals. However, with all the coming and going from the ferries, it’s always a pretty lively spot to take in your surroundings.

Of course, day-trippers can always use Rosslare as a stopping point for exploring Ireland’s sunny south-east coast, but it’s definitely worth your time sticking around to soak up the serenity of the small town itself. Spectacular sea views stretch across miles of sandy beaches, on which there are a plethora of interesting ways to connect with your surroundings – such as horse-riding, windsurfing, and even Pilates! 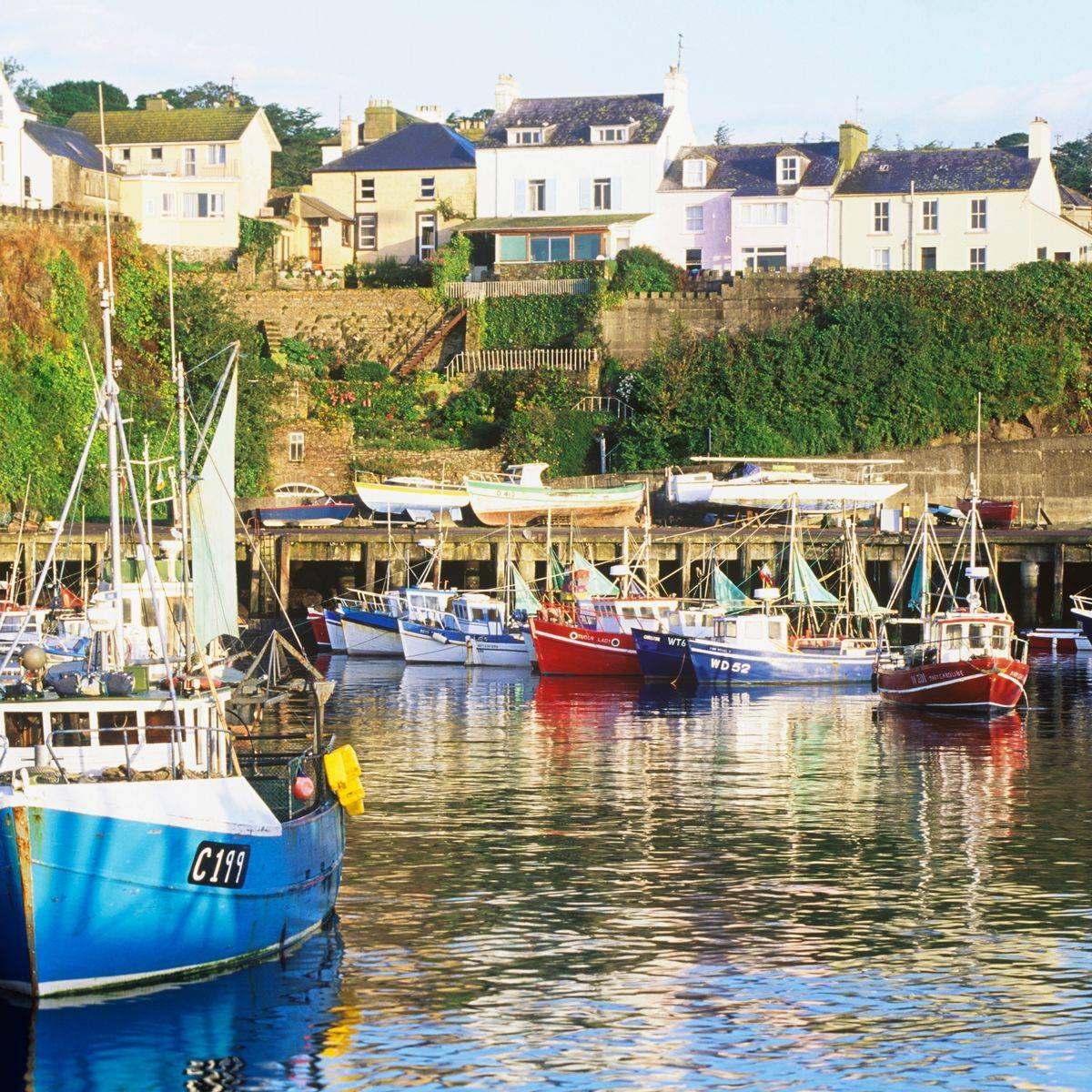 The harbour at Dunmore East has the second highest figure for fish landings in Ireland – which is not bad for a village with a population of just 1,800!

While today’s port was built just over 200 years ago, it is thought that Dunmore East has been the home of fishing communities since the Iron Ages. As well as being an important location for the industry, the attractive coastal town is also a popular tourist destination. Cruise ships regularly dock here to let their passengers explore the thatched roofs and traditional pubs – some of which were established in the 18th century!

For unparalleled maritime views and a collection of Waterford’s remarkable sea caves, be sure to walk along the cliff path leading to the neighbouring town of Portally.

In 2016 Ann Rinn (sometimes anglicised as ‘Ring’) was reported to be home to just 499 people, and what a lucky group they are!

The beautiful village is nestled in Co. Waterford and offers breath-taking seascapes across the waters. If you want to try out your ‘Cúpla Fócail’ from our monthly gazette, this is the place to do it – with around 70% of residents being able to speak fluently.

Despite its small size, An Rinn is a vibrant and welcoming community, who will draw you into the heart of Ireland’s heritage with an authentic offering of music, dance and language. 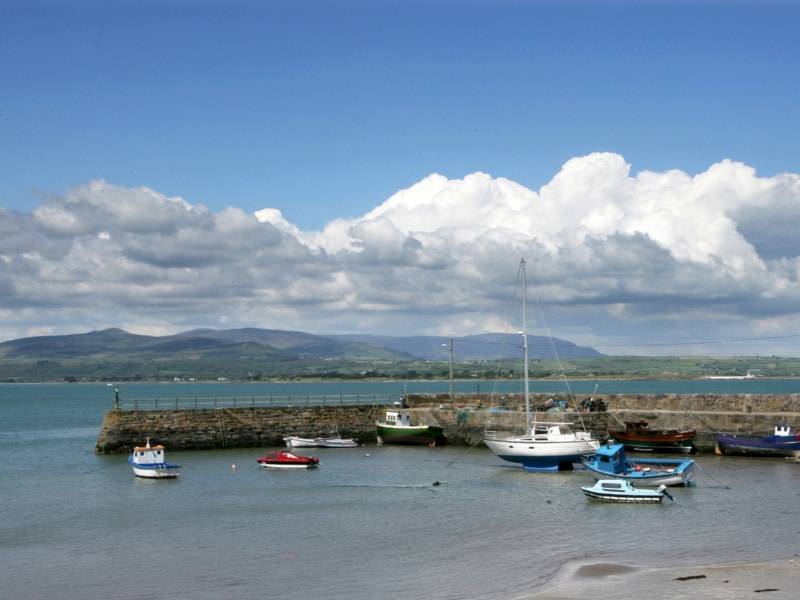 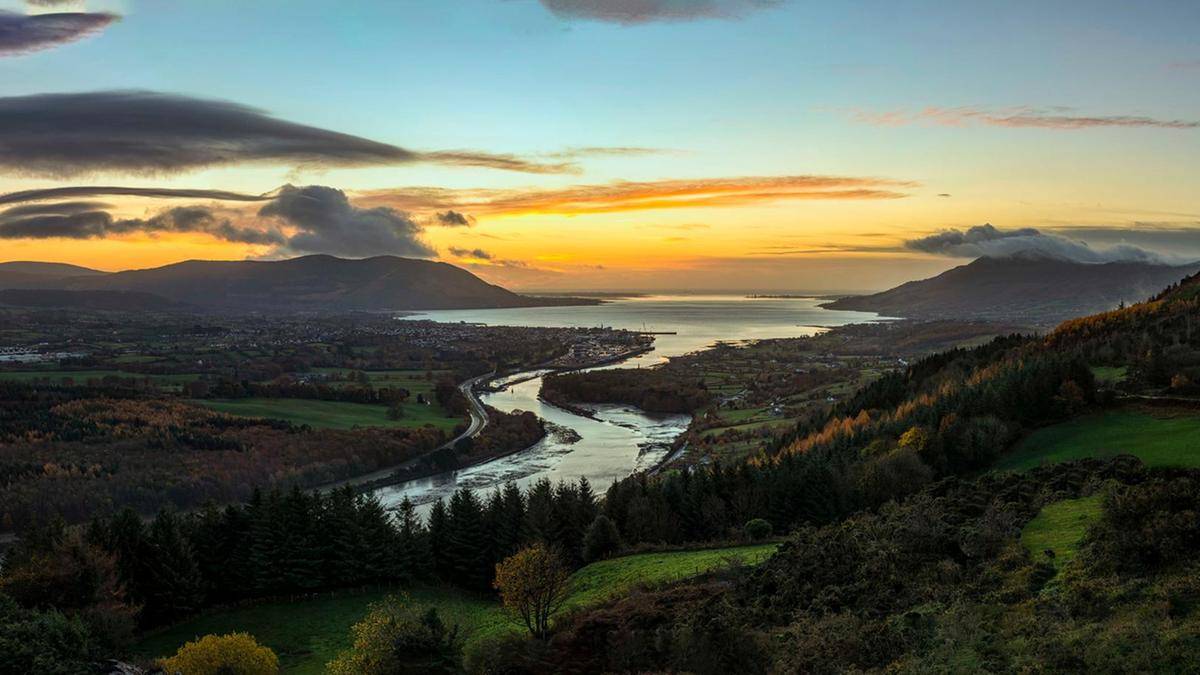 Next up is the beautiful port town of Warrenpoint in Co. Down. Nestled at the border between Northern Ireland and the Republic, it is separated from the southern part of the country only by a thin and winding channel of water.

Both the Cooley and Mourne Mountains provide the backdrop for the stunning scenic views over Carlingford Lough on which the town sits, which in turn leads out into the open expanse of the Irish Sea.

In the summer months Warrenpoint is host to a number of unique activities such as the Maiden of Mourne festival (soon to become the Loughside Festival) and ‘Wake The Giant’, which is a celebration of the great hero of Irish mythology - Fionn mac Cumhaill.

Finally, I’m going to leave you in a spot where the Irish Sea meets the Atlantic, at the sleepy but stunning little fishing village of Kilmore Quay.

This gem of Co. Wexford is postcard perfection with its whitewashed cottages, thatched roofs and colourful marina. On a clear summer’s day the waters take on an almost Mediterranean blue hue, which you can even delve into with a local scuba diving class to inspect Ireland’s ship wrecks and marine life at closer quarters – you might even find a curious seal or two joining you on your trip! 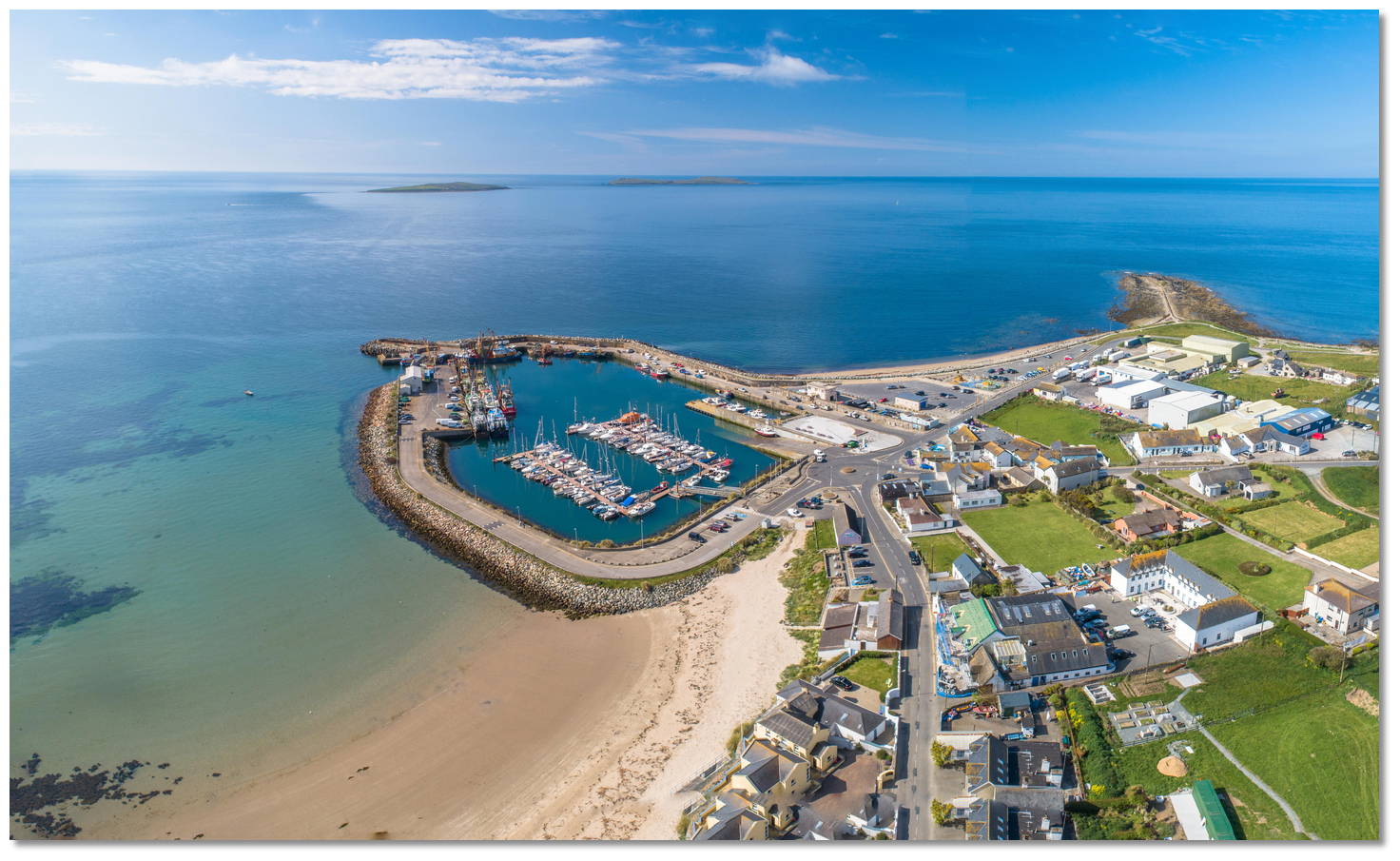 If you’d rather appreciate the waters from afar you can always just mill around and listen to the hubbub of the fishermen’s radios as they trail back and forwards with their hauls, or take a daytrip to the uninhabited yet beautiful Saltee Islands - just 5km away from the shore.

Of course, we could go on forever chatting about all of the fishing villages in the nooks and crannies of Ireland’s east coast, but the best way to discover these hidden treasures is by stumbling upon one yourself!

Have you ever been to one of Ireland’s fishing villages? Or is there one in particular that you would love to experience? Tell us all about it in the comments below.