Inspired by the Burren Of course, this month’s box is entirely inspired by the limestone rocks, vibrant foliage, and stunning scenery of the Burren – but Irish at Heart are by no means the first to draw creative guidance from this remarkable corner of the Emerald Isle.

For centuries the serene isolation has provided an inexplicable spark for imaginative minds, who have reshaped and morphed its essence into their own artistic outputs; allowing the Burren’s unique ambience to be experienced all over the world.

There are so many fascinating ways in which the nature and atmosphere of the Burren has been brought to life, but below I’ve shared a few which I find particularly inspiring. If you’ve got any examples that have personally moved you please let me know in the comments below – I just can’t get enough of this mesmerising landscape right now! 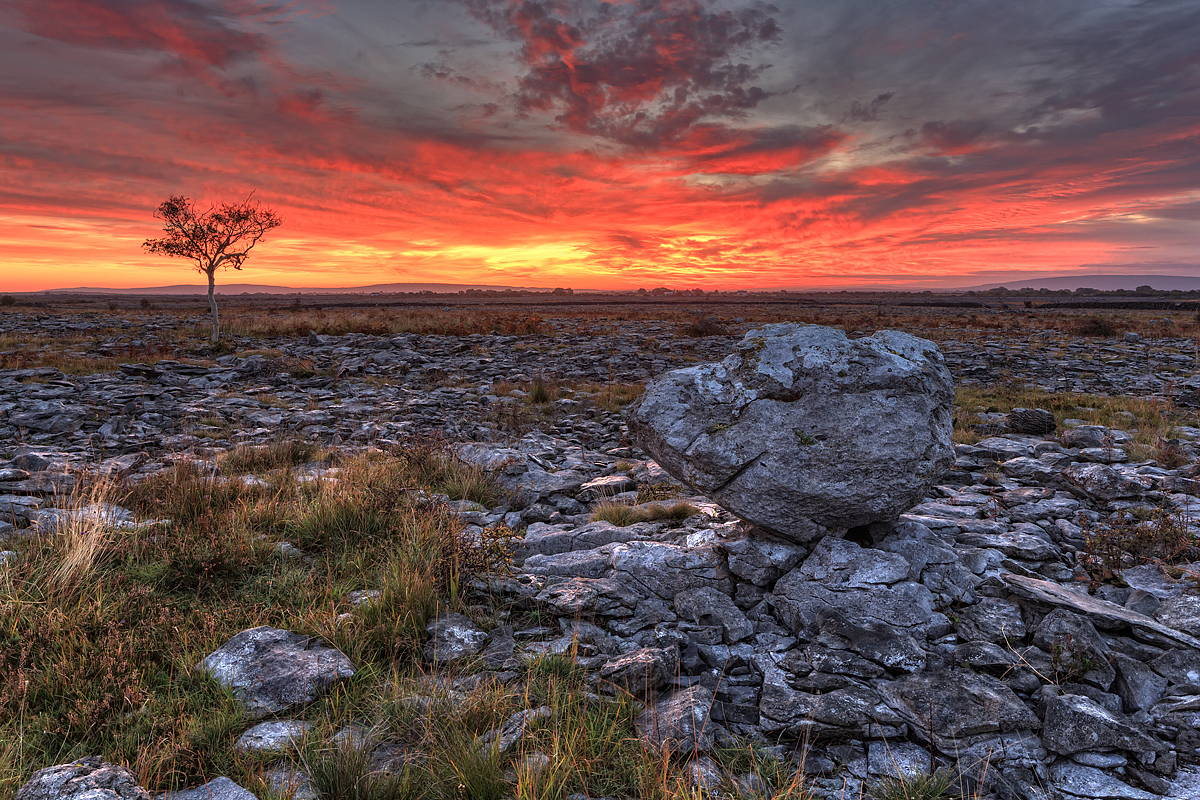 Lord of the Rings

There is a popular theory that the lunar-like landscapes and 'misty mountains' of the Burren provided JRR Tolkien with the inspiration for his illustrious Middle-Earth, with some speculating whether the name 'Gollum' could be derived from the Poll na gColm (or Pollnagollum) - the longest cave in Ireland. 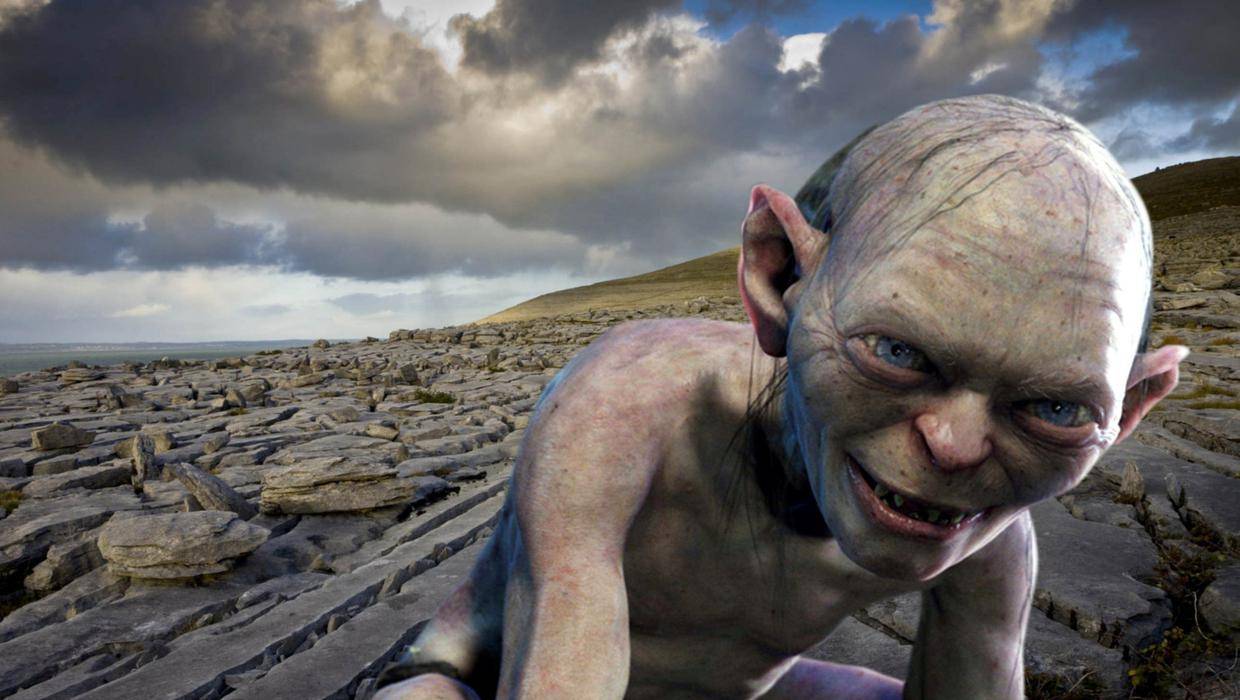 There is some debate about the chronological possibilities of this, as JRR Tolkien’s time in the area as an External Examiner to the English Department of NUI Galway came between 1949 and 1959, by which point much of the book had already been written. However, some experts maintain that his editing techniques which would have been applied before the books publication in 1954, could well have included adding details of the Burren’s precious landscape.

Whether or not the Burren inspired the author himself, it has certainly stimulated the imaginations of his following, and the Burren Tolkien Society holds a regular festival in which fans can take an adventure of their own through both literature and nature.

Those of you who have read our A Day at The Burren blog will already be familiar with this Co Clare establishment – but their products are so reminiscent of the Burren’s beautifully serene atmosphere that they definitely deserve a second mention.

The Burren Perfumery is constantly inspired by the wild and wonderful landscape that surrounds it, and each scent imbues the essence of the Burren, but from creatively different perspectives.

Pick out the floral fragrance of lavender nestled amongst the fresh undertones of garden herbs, or take the beauty of the Burren at face-value with the unscented but wonderfully nourishing creams that draw inspiration from the unadorned splendour of the limestone. It’s truly fascinating to experience the multifaceted story of the Burren, shared through the aromas and textures of these delightful little luxuries. 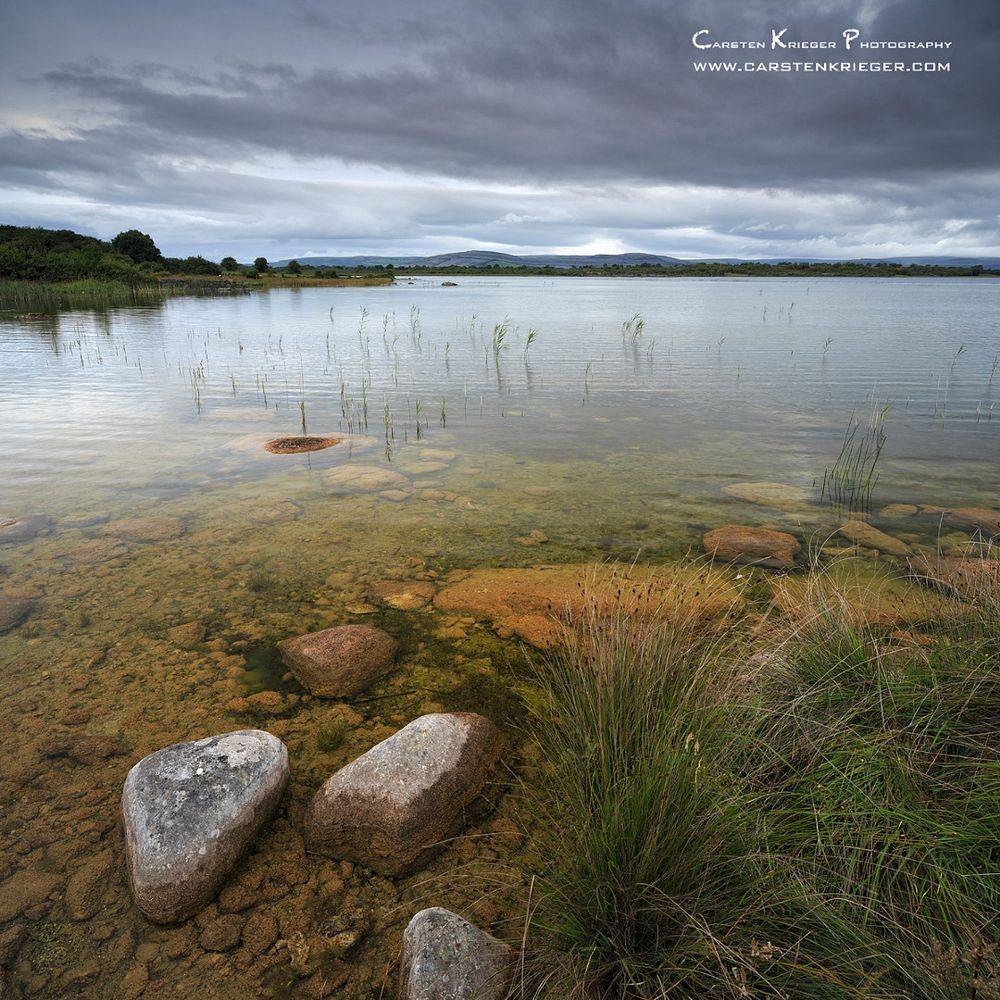 I would be surprised if many of you have heard the next one, as Ben Howard produced this song as part of Corsaire (also featuring Mickey Smith and Nat Watson) to feature on The Spirit of Asana soundtrack – an Australian surfing film. 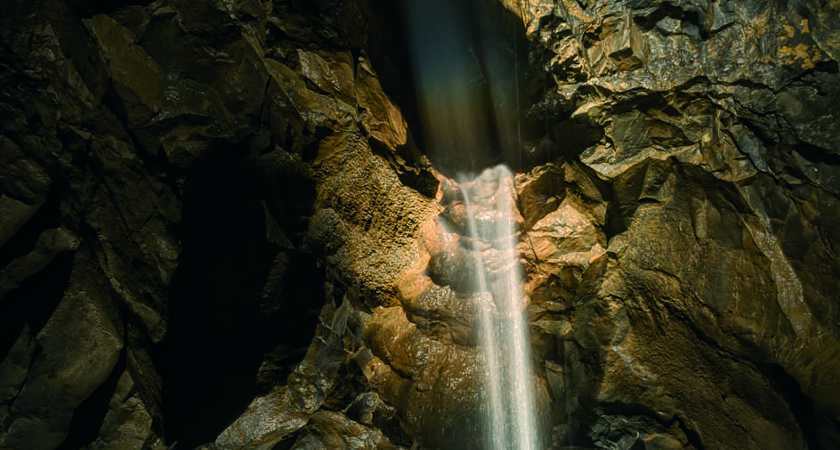 The track's haunting beauty is a flawless musical interpretation of the Burren, in all its complexities, raw emotion, and fascinating history. You can feel your soul rise and fall in response to the dramatic crescendos and gentle breathy pauses that shroud the whimsical lyrics; with eerie vibrations flowing through the music just like the echoing caves beneath the surface.

Pop on your noise cancelling headphones, settle yourself in a darkened room and prepare yourself to experience the Burren in its purest form. The outro is particularly special, with a gentle fading strumming that calmly brings you back to reality, after a musical exploration of one of Ireland’s most captivating landscapes.

Carsten Krieger truly encapsulates the mysteries of the Burren through the lens of his camera, and lays bare its beauty for all to admire - with many of the images in this blog being examples of his work.

In 2015 he released a photography book entitled “This is the Burren” which artfully harmonises and entwines the diverse characteristics of the area; exposing the ancient heritage, exotic wild flowers, and human influence in a breath-taking collection of images. He has a wonderful way of expressing the transformations that can take place under the ever-changing light, such as pinpointing the exact moment that a rising sun starts to warm the weathered limestone below. 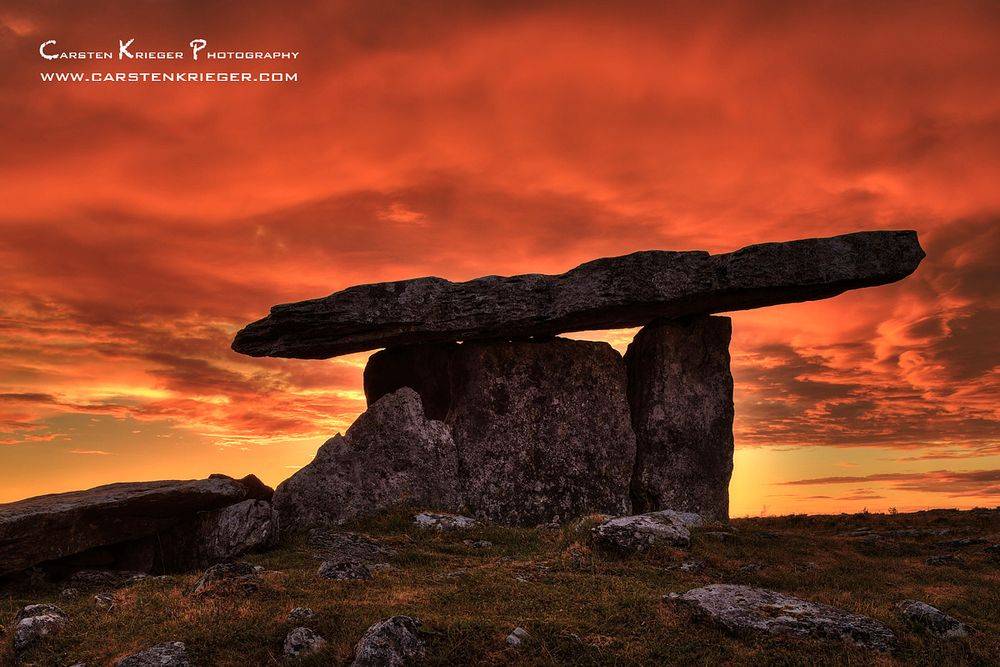 The German born photographer was entranced by Ireland’s range of scenery and moved to Co. Clare in 2002, where he continues to capture the enigmatic energy of the Emerald Isle. 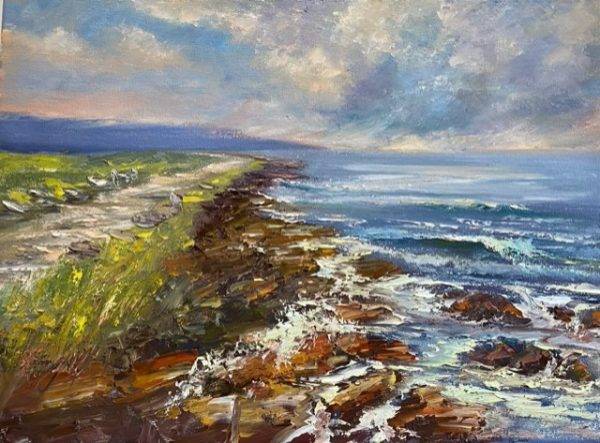 The impressionist style of Doreen Drennan perfectly captures both the turbulent wilderness of the Burren and its lonely serenity.

I particularly love the chaotic energy of the waves in this gorgeous painting of Flaggy Shore, which is a captivating contrast to the stoic rocks and calming clouds which surround the waters. She has an envious eye for colour, which brings to life the more subtle splendours of the karst landscape that wouldn’t be immediately obvious to the untrained gaze.

Doreen has been painting the beauty of the Burren and the Wild Atlantic Way for over 30 years, and her intimate understanding of the area is gorgeously apparent in the depth and detail of her work. It’s almost as though she has honed her technique in response to the atmospheric shifts of her surroundings, and the result is truly wonderful to behold.

From W.B. Yeats to Seamus Heaney, there are plenty of poetic verses that have grown from the Burren’s fertile soil of inspiration – but I’d particularly like to draw attention to the work of Emily Lawless.

Indeed her earlier prose which was set in the area was publicly derided by Yeats, who critiqued her novel “Hurrish” as a stereotypical and superior depiction of Irish peasantry, accusing her of having "an imperfect sympathy with the Celtic nature” which, if you know Yeats, is the ultimate insult. Although, he later reconciled his views, even going as far to include some of her later novels in his Irish recommendations.

However, it is her poem “From the Burren” which particularly caught my attention. As a keen gardener herself, Lawless manages to paint a picture of a beauty that is barren – yet still full of life.

“Nought but herself, her inmost core, survives,

Stripped to the elements; enskyed and pure,

Remote, and stern, and coldly sanctified;” 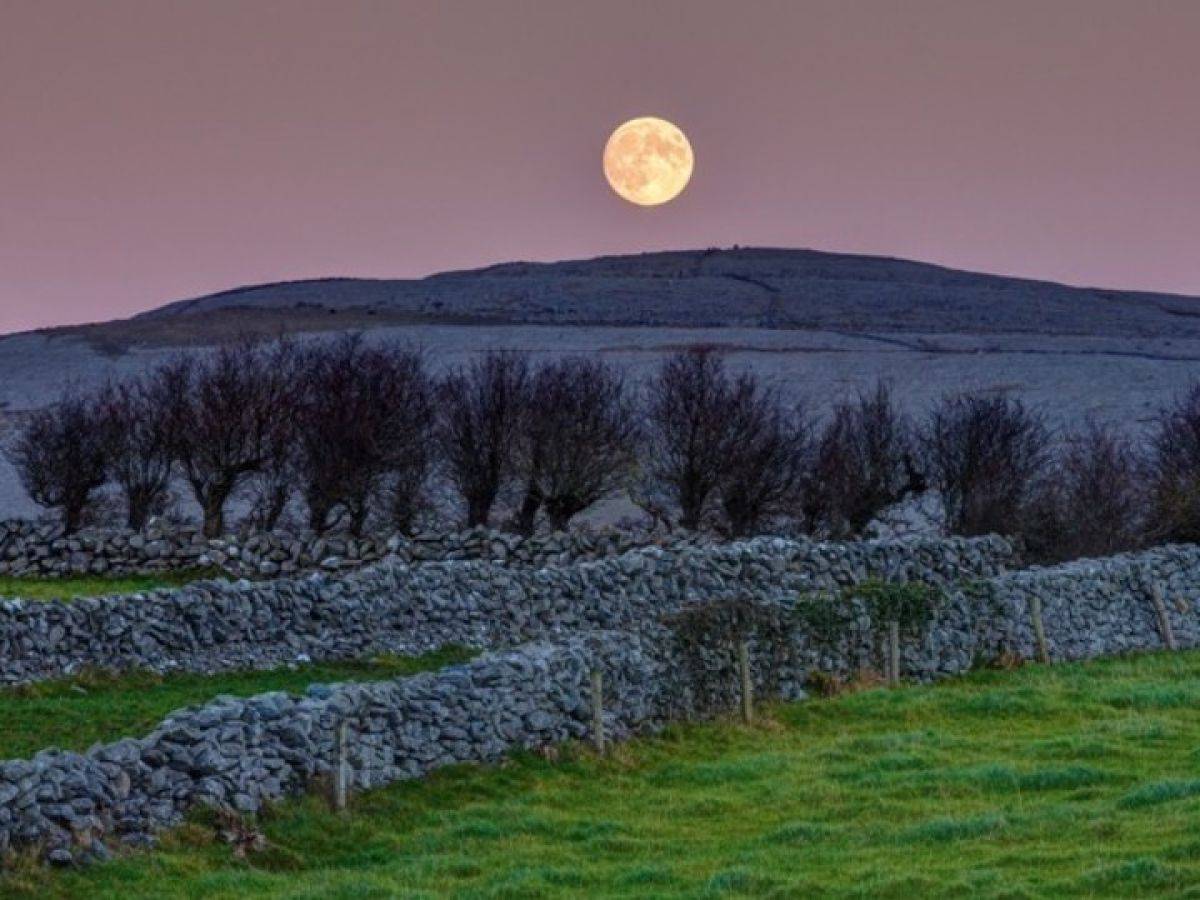 Her words paint the picture of a place which appears dark, lonely and gloomy – but throughout the verses something hopeful and magical shines through; echoing a loveliness that is hidden in plain sight. Rather like a vibrant new wildflower that grows through the crack of an ancient limestone pavement.

Which of the above is your favourite expression of the karst and enigmatic landscape that is the Burren? Have you been inspired by any other art form which has roots in the area? Let us know in the comments below.

Subscribe Now
Back to The Irish at Heart Blog - Celebrating Everything Irish!
Use left/right arrows to navigate the slideshow or swipe left/right if using a mobile device
x