We’ve all been missing heading down to the local to indulge in some patter and a pint during lockdown, and this couldn’t be more true for the people of Ireland – for whom bars can be so much more than simply somewhere to catch a drink.

Concerts and festivals hold their own excitement, but nothing beats the intimacy and inclusion of a good old trad session down at your favourite Irish pub. Live music is an undisputable part of our culture, and those nights in a cosy pub packed to the gunnels with the sounds of fiddles, guitars and laughter seeping out onto the street is where the authentic Irish experience really comes to life.

It’s a truly beautiful thing, to see tourists and locals blend together in the delight of the evening, where the music isn’t simply listened to – but experienced. I’ve listed a few of my favourite pubs where traditional Irish music is played and accompanied by some of the best craic in Ireland!

Obviously in the current situation, a lot of these bars are currently closed due to coronavirus precautions, but when they open again you can be sure – it’s going to be one hell of a party! 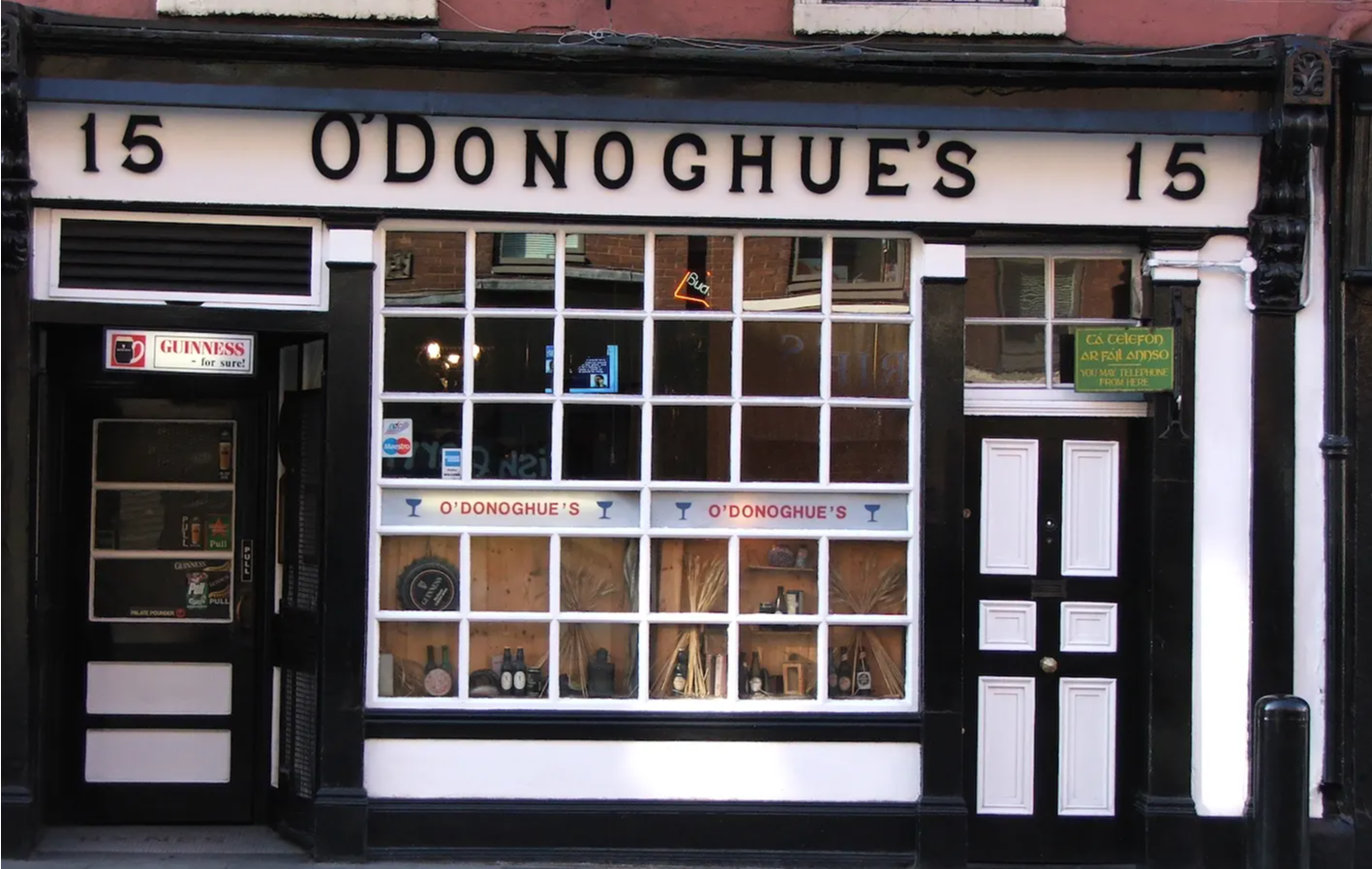 Any Dubliner with a penchant for traditional Irish music will be well acquainted with O'Donoghue’s. In fact, even The Dubliners themselves have been known to frequent the popular venue on Merrion Row.

Visitors will see photos of the past and current band members adorning the walls, along with all the other famous acts that have passed through the historic doors of the iconic Irish bar, including Christy Moore, Phil Lynott and Andy Irvine – the latter of whom actually included a song dedicated to his old stomping ground on the 2007 Mozaic album “Changing Trains.”

Located just a few minutes from St Stephen’s Green, O'Donoghue’s is a hub of entertainment for locals and tourists alike – with live music seven nights a week and a truly authentic atmosphere. 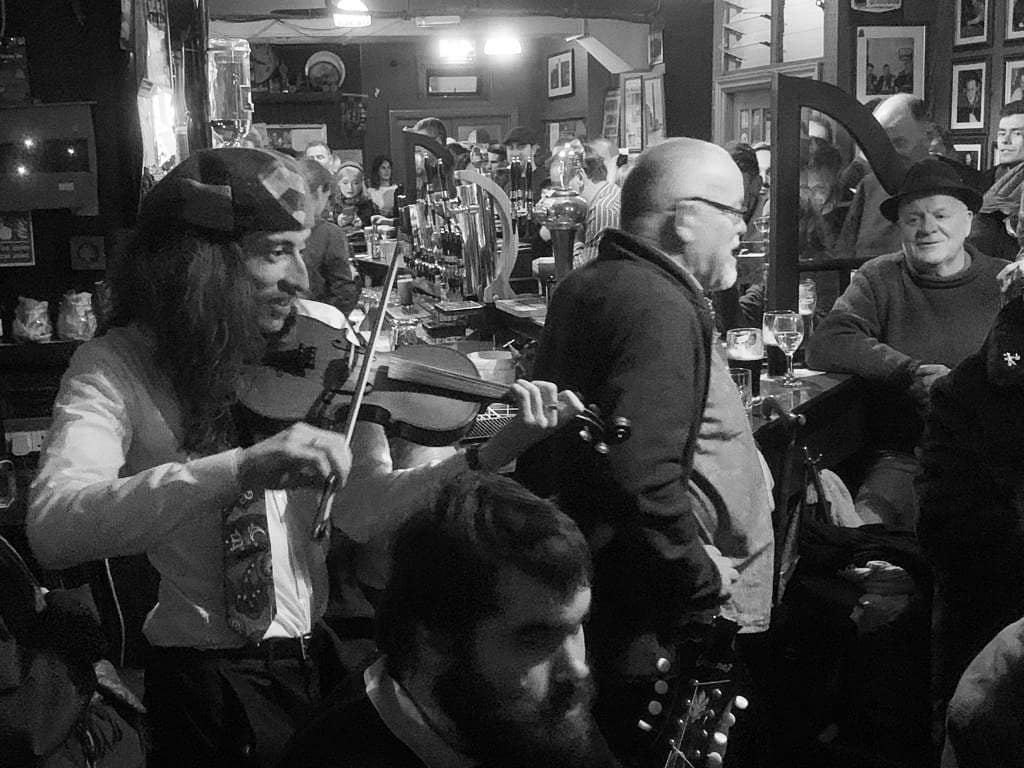 Described in its own words, The Cobblestone is a ‘drinking pub with a music problem' and that more or less sums up this wonderfully traditional Dublin bar, which is located just around the corner from Jameson’s Distillery.

While they have organised events, the best way to experience this bar is on one of their laid back “turn up and play” nights which showcases the very best in Irish folk music. You’ll come

across some regulars, such as the talented Mulligan family who own the bar, but the sessions are open to anyone who can pluck out a tune - even American comedian Steve Martin has taken to the stage with his banjo.

Not so keen on performing? You can always attend one of the Balaclavas sessions offered at the pub, in which traditional Irish music is taught on a variety of instruments.

If you fancy a bite to eat, The Cobblestone are famed for their thinly sliced fried potato dish, infused with a choice of local flavours. This dish is also known as Tayto Crisps, so if you’re feeling a bit peckish you’d be best to grab a bite beforehand. Although they do serve an excellent pint of Guinness, which is pretty filling in itself…

If you’d rather sample the Irish music scene accompanied by some traditional cuisine then The Brazen Head by the banks of the River Liffey is less than ten minutes’ walk away from the Cobblestone.

With a heritage that has been traced back to 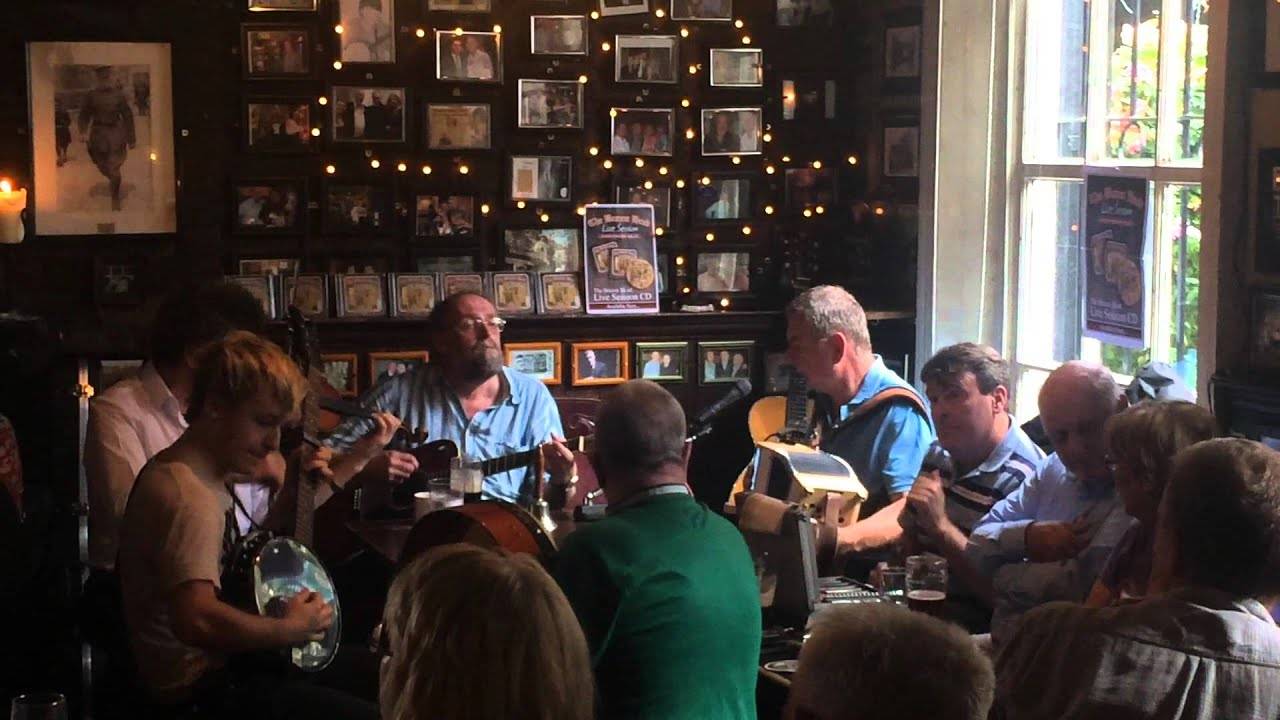 1198, The Brazen Head has claims of being the oldest pub in Ireland, and indeed it is deeply rooted in Ireland’s history - from a refuge for revolutionaries, to an inspiring haunt for local writers.

Today it is simply a welcoming hub for Irish entertainment at its finest, offering nightly live music with a whole host of regular acts who have been inspired by the world of Irish folk music.

If you’ve got a few nights in Dublin, you’ll probably find yourself returning for a second dose of The Brazen Head, and you’ll likely recognise a few friendly faces from the night before! With great food and lively music in an exciting atmosphere, patrons of The Brazen Head always come back for more.

Maybe it’s something to do with stepping from the busy 21st century Dublin straight into the rustic charm of years gone by, or perhaps it’s the ceiling decked in twinkly green fairy lights – either way, there’s something magical about the atmosphere in The Celt Bar.

Once the bands kick off it’s not always easy to snag a seat, but with a programme featuring some of the most talented traditional musicians that Ireland has to offer, sitting down is the last thing you should be doing. It’s definitely a place to get in amongst it, whether you’re sipping a pint, dancing a jig or just enjoying a bit of craic with the locals. 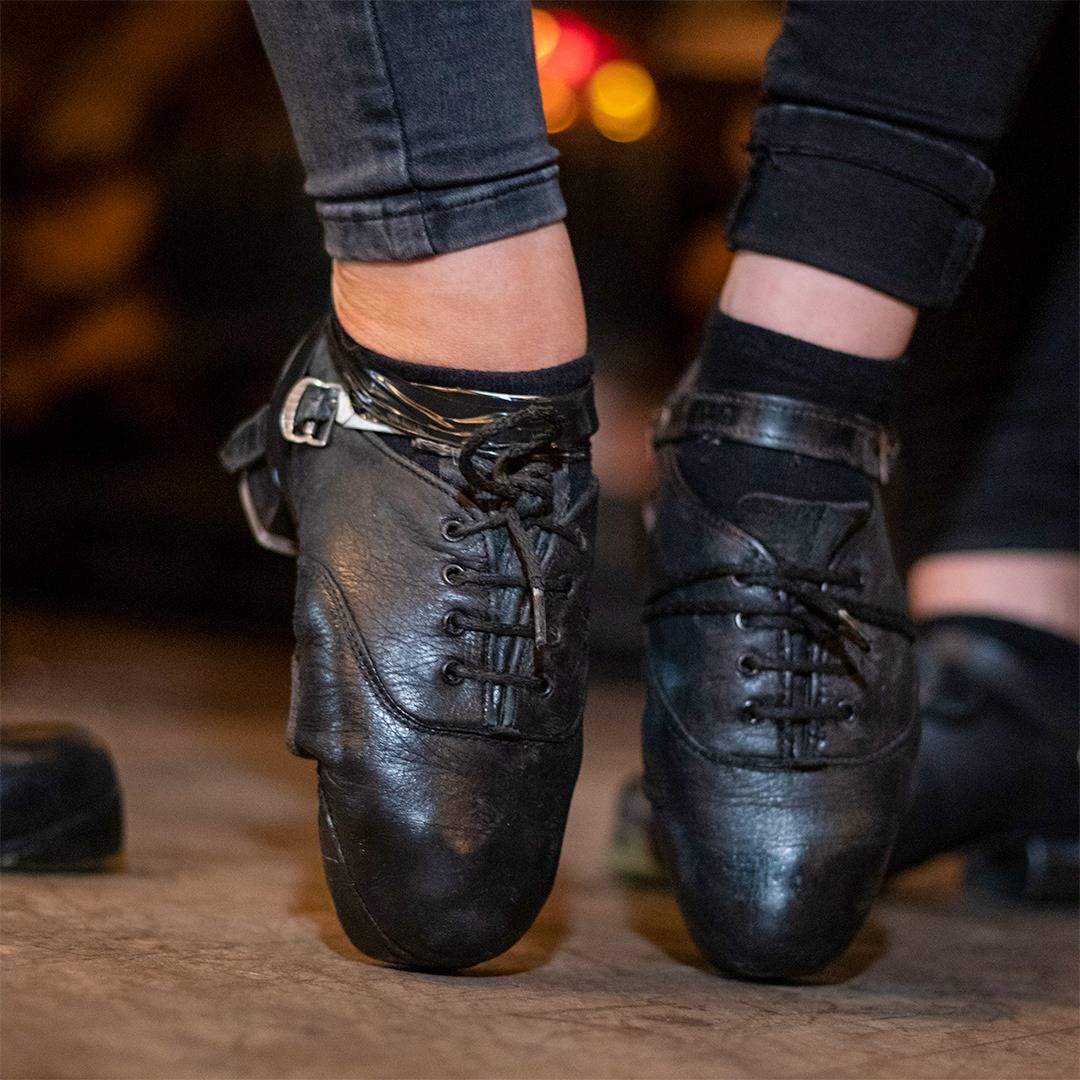 As well as the live music, a common soundtrack to the Celt Bar is the rhythmic clack of heels on wood as Irish dancers take to the floor to entertain the crowd. The bar has a lively social media presence that is regularly updated with videos of performers and patrons alike enjoying a night of traditional Irish fun, but to truly experience the charms of The Celt – you’ll have to get yourself over to Talbot Street. 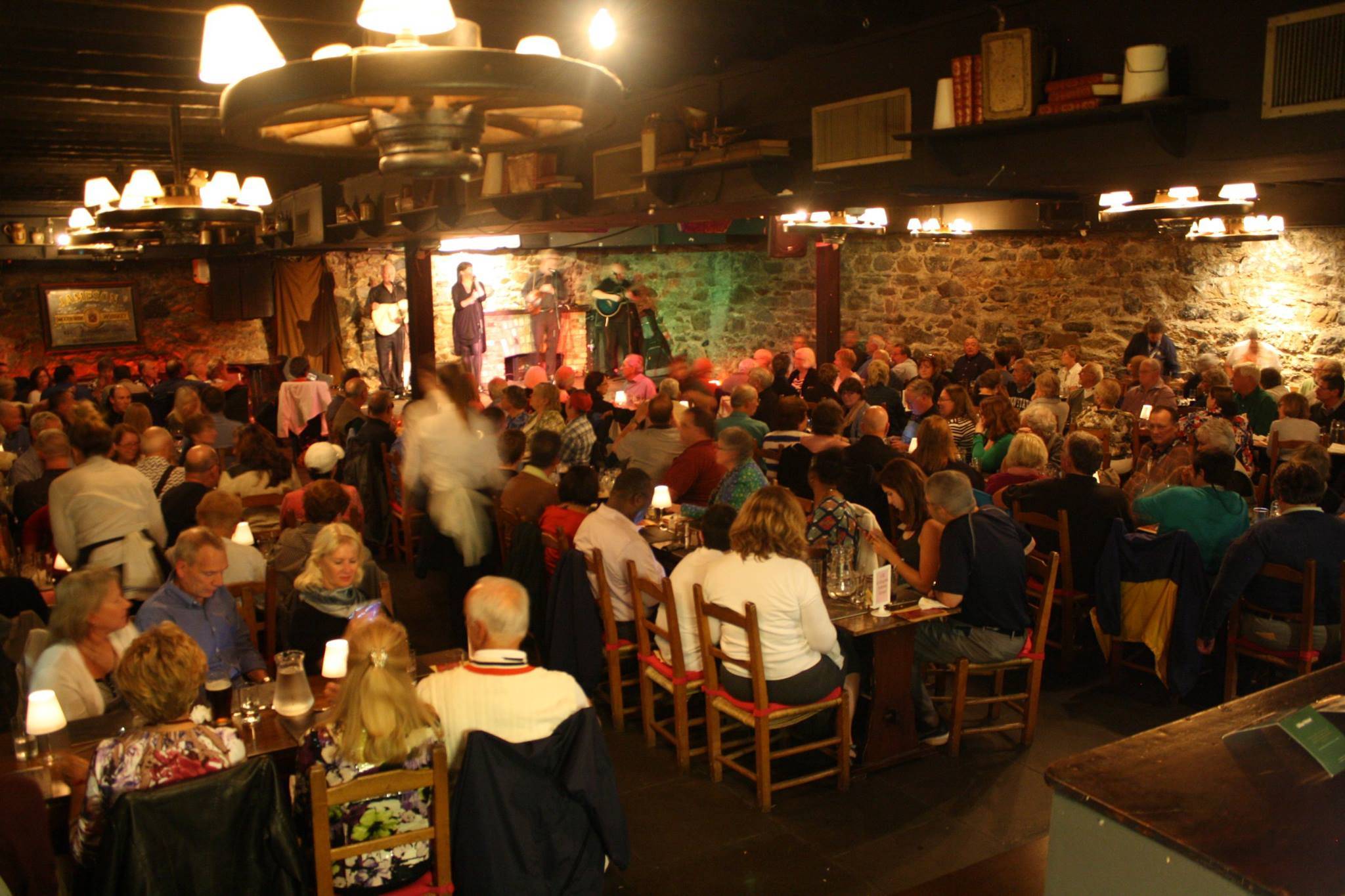 The history of The Abbey Tavern dates back to the 16th century, and with its flagstone floors, roaring peat fires and striking stone walls it certainly exudes the impression of by-gone grandeur.

That’s not to say that the lively pub just outside of Dublin is stuck in the past, but rather it offers all the comforts of modernity in an authentic

setting – which lends itself very well to the world famous ‘Traditional Irish Show’ which has been running there since 1963.

This is a truly Irish experience with a twist, where the warm-up act is a sumptuous three course meal – followed by a night of entertainment featuring the very best of Irish folk culture.

Back in the sixties when the event was established by Minnie Scott-Lennon (her grandson Richard Tobin is the current proprietor) The Abbey Tavern Singers experienced a flush of fame, and toured the US and Canada with their traditional Irish music – before returning to the place it all began – The Abbey Tavern in Howth.

Moving away from the capital to Co. Clare, where Gus O’Connor’s pub has been run by seven generations of the O’Connor family since 1832.

When the last O’Connor retired in 1998 it was taken on by new owners, who thankfully made it their mission to retain the charm and musical legacy of this Doolin landmark. 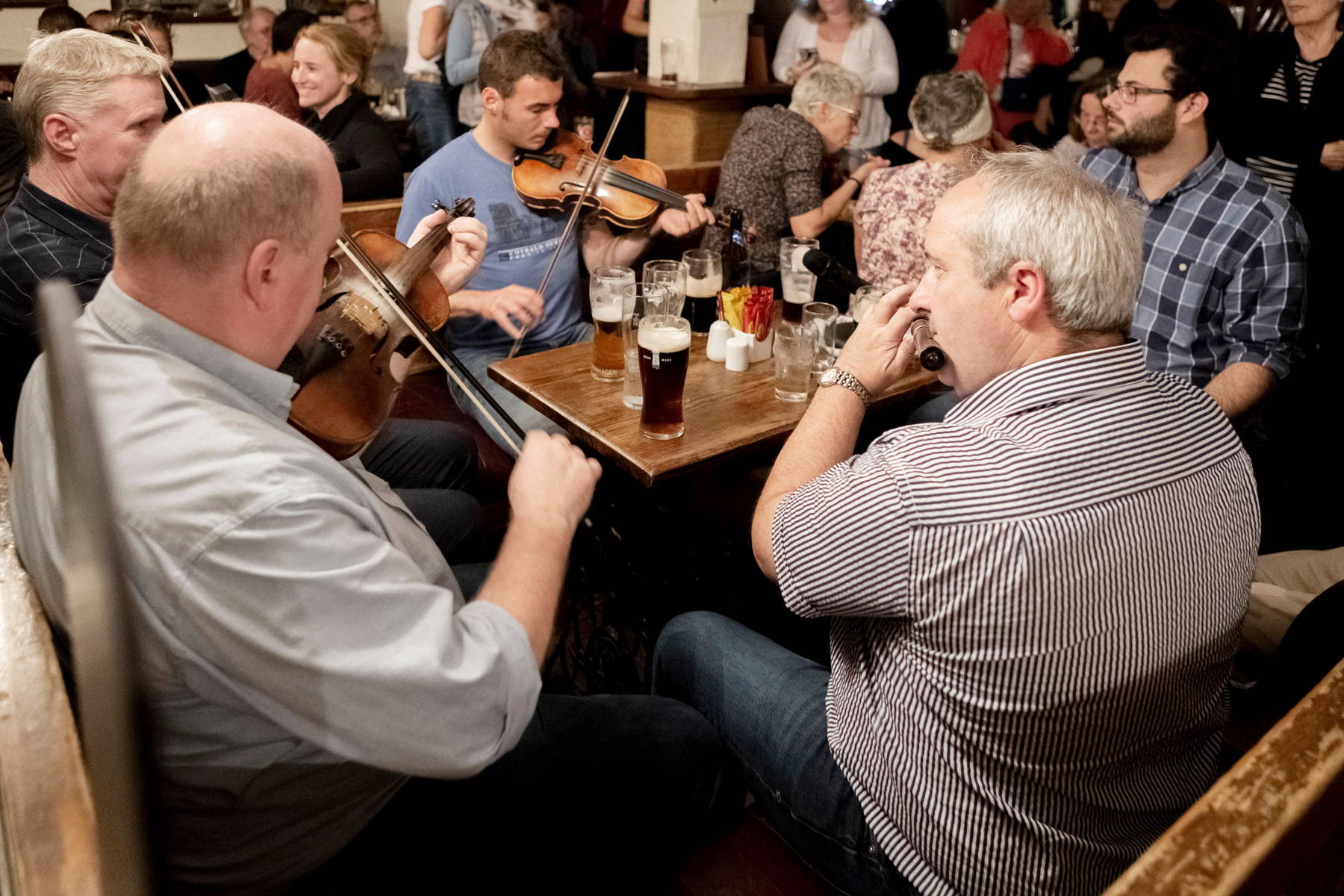 The cosy bar is a hub of activity where friendships and memories are made on a daily basis, with the staff priding themselves on extending a true Irish welcome to anyone who walks through the door.

The friendly ambience will make you feel right at home, which is just as well as audience members are actively encouraged to get involved in the animated sessions. Whether you’re in the band, singing along or simply tapping your toes – everyone is part of the show at Gus O’Connor’s. 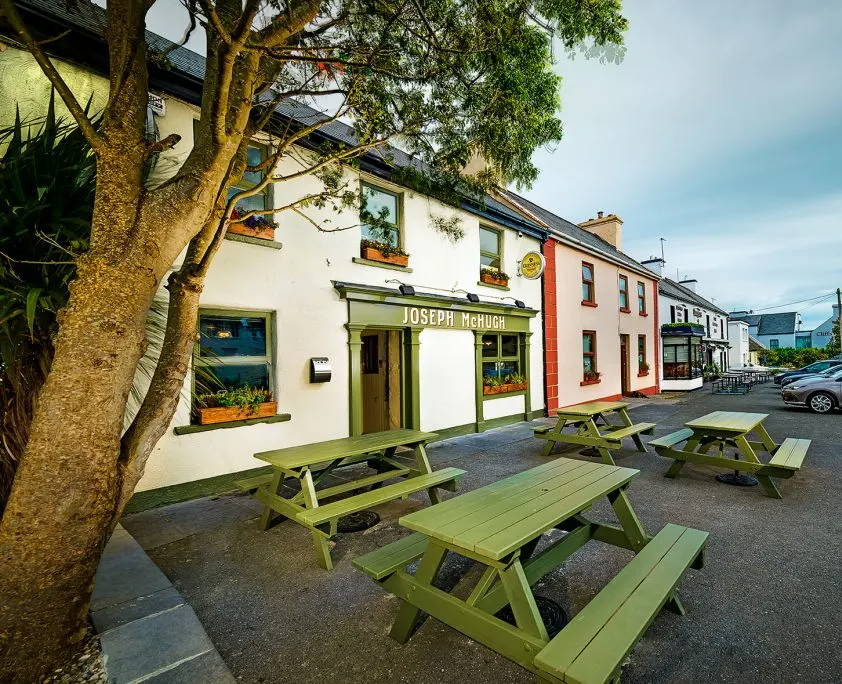 Joseph McHugh’s is another pub which has been immortalised in the world of Irish music, thanks to a regular Dermot Kelly’s who wrote a ballad entitled “The Seven Day Licence of Joseph McHugh”.

“Come all ye young fellows, who travel the land,
In search of the craic with guitar in your hand.
Go down to Liscannor, in the County of Clare,
Sure you'll find a pub in it, that's ever so rare”

It’s been a while since Joseph McHugh himself tended the bar, but if the words of the song are anything to go by then it’s very much his legacy that lives on in the Liscannor pub today. Music is still at the heart of the pub’s allure, but with more and more contemporary music gracing the ears of its visitors. That’s not to say that the traditional tunes have taken a back seat, with ‘Trad Thursdays’ being an established and celebrated custom.

Stepping away from the mainland now, Joe Watty’s Bar in Inishmore (the largest of the Aran Islands) is well worth the boat trip from Rossaveal in Co. Galway.

Despite being located on an island with a population of less than 1,000, Joe Watty’s has earned a global reputation for its live music – with Lonely Planet even listing them in their “Top 10 Pubs in Ireland for Traditional Irish Music.” 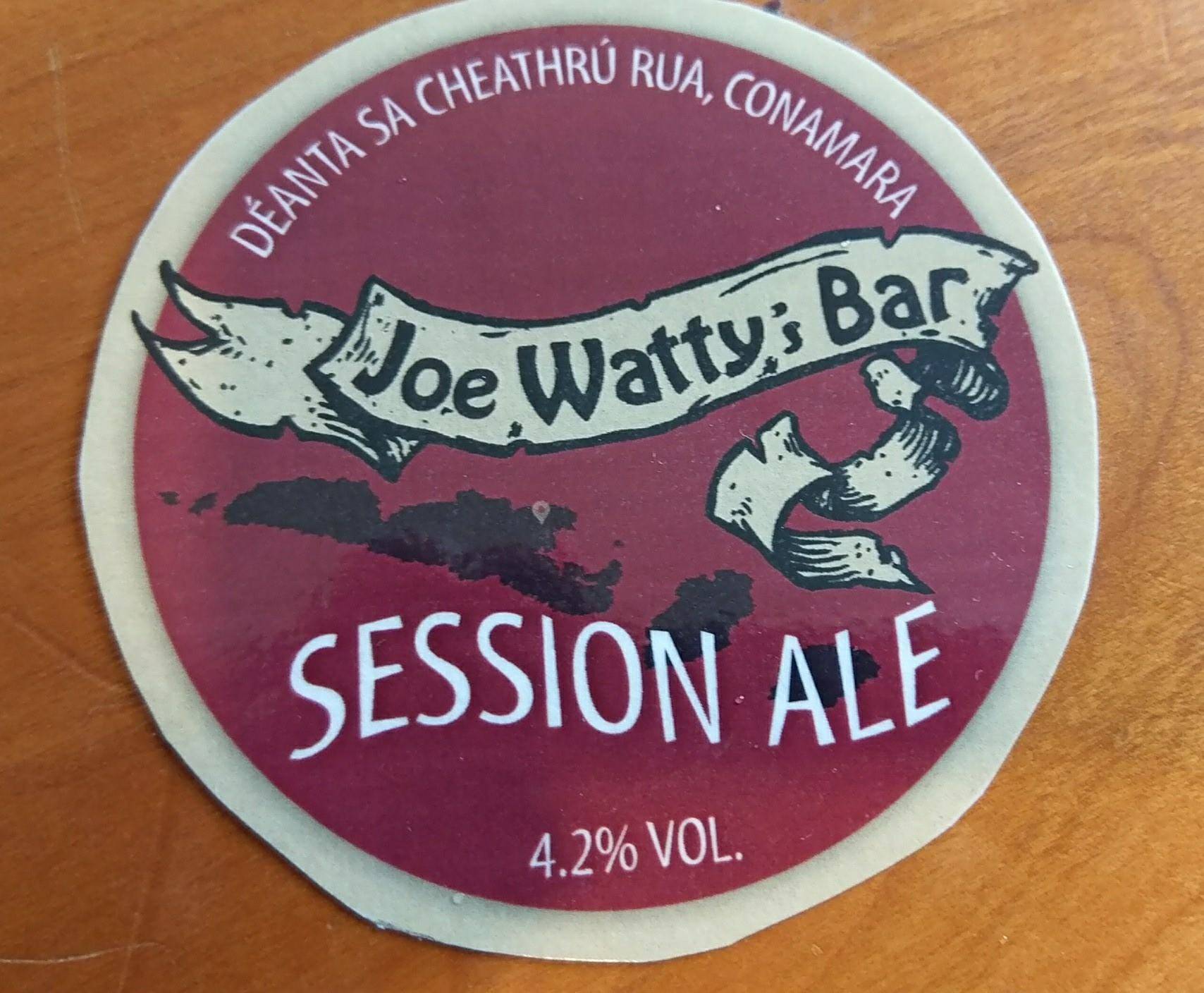 They live by the motto “Ceol, Ól, Bia agus Craic!” (music, drink, food and craic) which can be experienced in year-round live music, impressive choice of craft beer, wine and whisky, sumptuous locally caught seafood and of course – that traditional Irish hospitality.

If you really want to get involved in the music scene of Inishmore, be sure to visit in March – when the island hosts its annual Celtic music festival - Árainn Ceilteach.

Last but not least on the list is none other than the home of Clannad, Enya and Moya Brennan. Leo’s Tavern opened in Donegal in 1968, and the nightly musical sessions provided a starting stage for the children of Leo Brennan, the bar’s founder.

Leo himself had been a musician all of his life, travelling Ireland with his family group ‘Slieve Foy Band’ and after a few years of performing solo, decided to set up his own entertainment venue. The bankers and businessmen of the time gave Leo just six months before the venture failed – and how wrong they were!

Leo’s Tavern was an instant hit, with the Meenaleck locals packing out the pub every night to enjoy the musical talent and flowing banter that was on offer each and every night. The bar was always a family affair, and the children were often pulled from their shifts behind the bar to perform in front of the crowd.

Today the bar is run by Leo’s youngest, Bartley Brennan, who has completely rejuvenated the tavern to include a stage, dinning and delicious food. But don’t worry, when the kitchen closes at 8:30pm Leo’s goes straight back to its roots – with trad sessions, family sing-alongs, and the occasional special guest (often with a familiar surname…)