I know that they’re often cheesy, and stereotypical and mostly seem to revolve around “Irish Pubs” that wouldn’t know their Guinness from their Jameson’s – but I can’t help loving St. Patrick’s Day specials on television.

I always find watching the drama/comedy/capers unfold amongst the revelry of St. Patrick’s Day strangely comforting, and love seeing all the Irish paraphernalia donned by the characters to mark the occasion. As far as holiday specials go, Christmas always seems to follow a certain plotline, but because St. Paddy’s is such a fun and random holiday in the first place – anything can happen!

I’ve listed some of my favourite St. Patrick’s Day episodes below, I think I might have a themed binge session in the lead up to the day of our patron saint. Seeing as most of my social activities seem to involve Netflix these days anyway…

With the capers of “The Gang” centring around their self-owned Irish pub “Paddy’s” it’s perhaps unsurprising that they have an episode dedicated to St. Patrick’s Day.

However, before celebrations can kick off Charlie substitutes green food dye with green paint for dying the beer, and has sampled a fair amount of the product. This provides sufficient confusion for him to convince himself that he has caught a leprechaun (in the trap he sets every year) in the basement – with pretty disastrous consequences for his detainee. 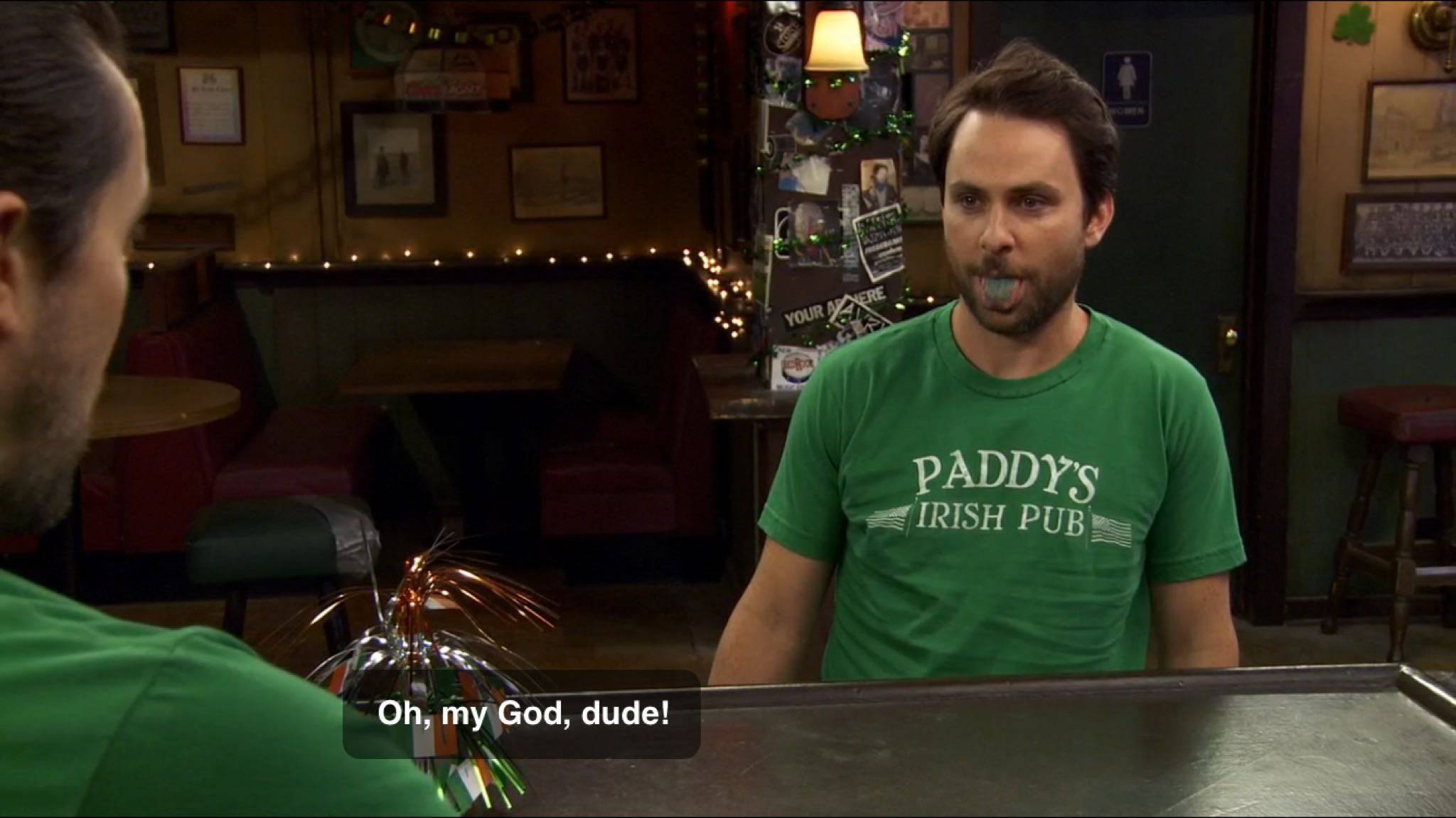 Meanwhile, a hare-brained money-making scheme of Dennis goes predictably array, with Dee on hand to offer hilariously bad Irish impersonations. It’s definitely not your average holiday-special episode – but if your humour is a bit on the darker side, then you’ve struck gold with this series!

How I Met Your Mother – No Tomorrow

As another sitcom in which the characters seem to spend an inordinate amount of their time in an Irish Bar, a St. Patrick’s Day episode was but a right of passage for How I Met Your Mother. 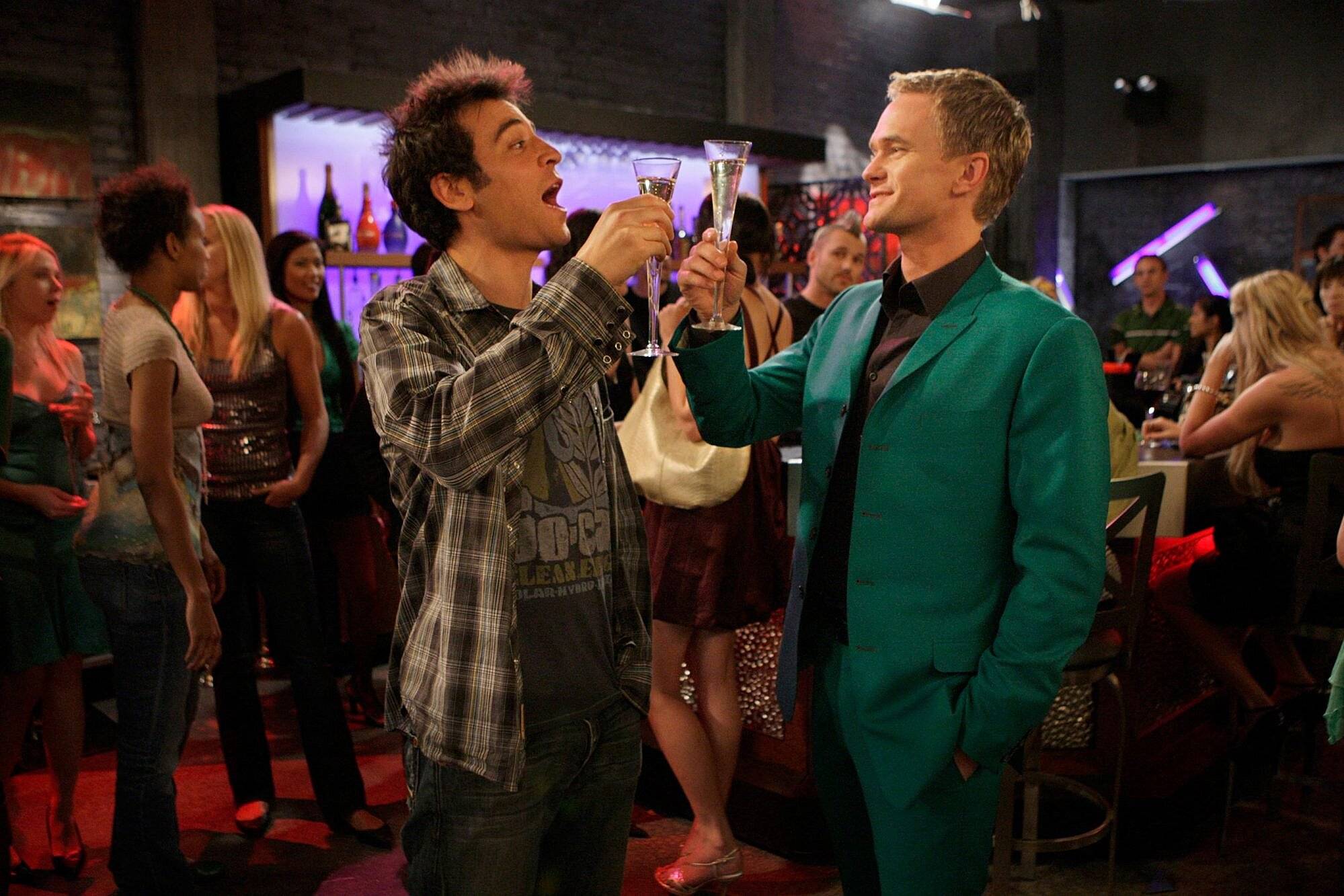 The episode mostly focuses on a raucous night of partying for Ted and Barney, in which the luck of the Irish seems to translate as a world without consequences for Ted but, as with most sitcoms, not without a moral lesson at the end.

Not for Barney though. He just stoats about in an excellent green suit, demanding green beer and refusing to spend his St. Patrick’s Day at home playing board games. I like his style! It’s a good thing the show isn’t still running though – Mr. Stinston probably isn’t cut out for a lockdown St. Patrick’s Day…

The Simpsons - Homer vs. the Eighteenth Amendment

Certain scenes of this episode vaguely make it look like the colour on your telly has gone wonky, but actually it’s just all the character’s staple outfits have been updated with a green tinge for St. Patrick’s Day. All that is apart from Bart’s who gets mercilessly pinched at school for forgetting to wear green (is the pinching really a thing in the U.S? I’ve always wondered…).

Anyway, an out-of-control St. Patrick’s Day parade results in uncovering a Springfield law that has banned the town from consuming alcohol – not something that Homer Simpson is going to stand for… 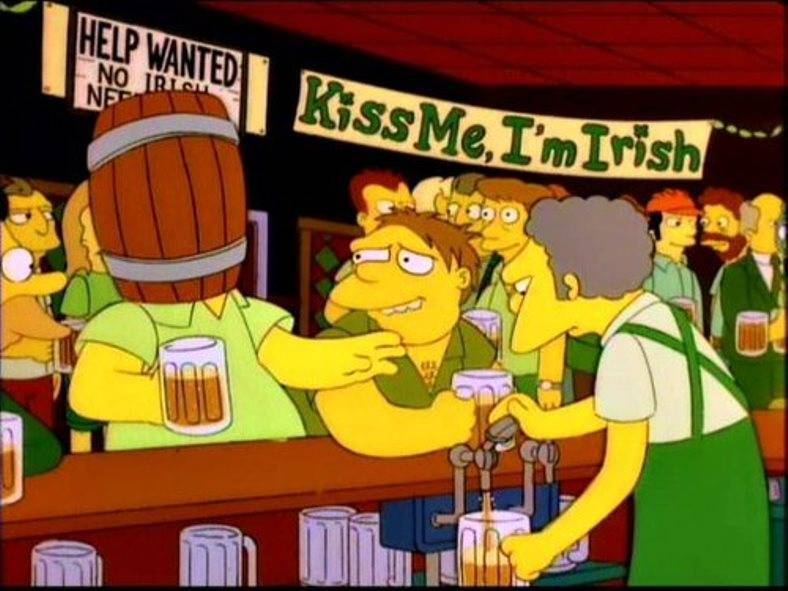 Cue bootlegging at Moe’s, an ill-fated ‘Duff-Zero’ campaign, and just your general Simpson’s capers. There is another St. Patrick’s Day that crops up in more recent series – but the classics are always the best! 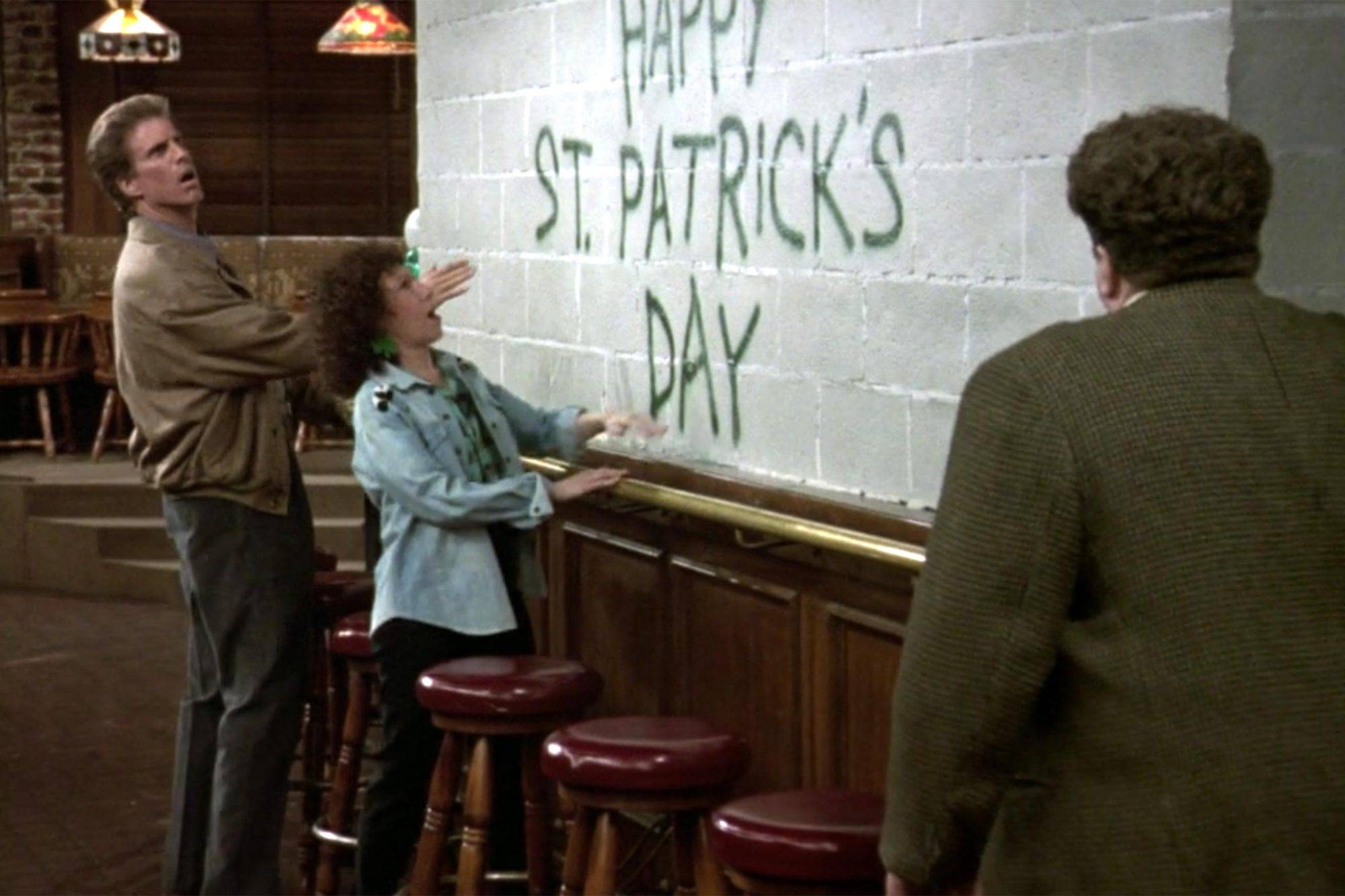 Speaking of classics! Even the iconic Cheers has been known to drop in the occasional St. Patrick’s Day episode here and there – mostly involving hijinks with rival bar Gary's Olde Town Tavern.

One such episode sees the gang competing with Gary to see who can take in the most cash on one of the biggest party days of the year – St Patrick’s Day. Of course, the simple wager is complicated by each side trying to hamper the other’s chances which, naturally, backfire in the most comedic ways.

“It is St. Patrick's Day. And here in Scranton, that is a huge deal. It is the closest that the Irish will ever get to Christmas.” – Michael Scott

St Patrick’s Day nearly turns into a non-event in Scranton, as fun (and often misinformed) boss Michael Scott tries to free his staff from the clutches of company CEO Jo, who is determined that the branch will be working late. 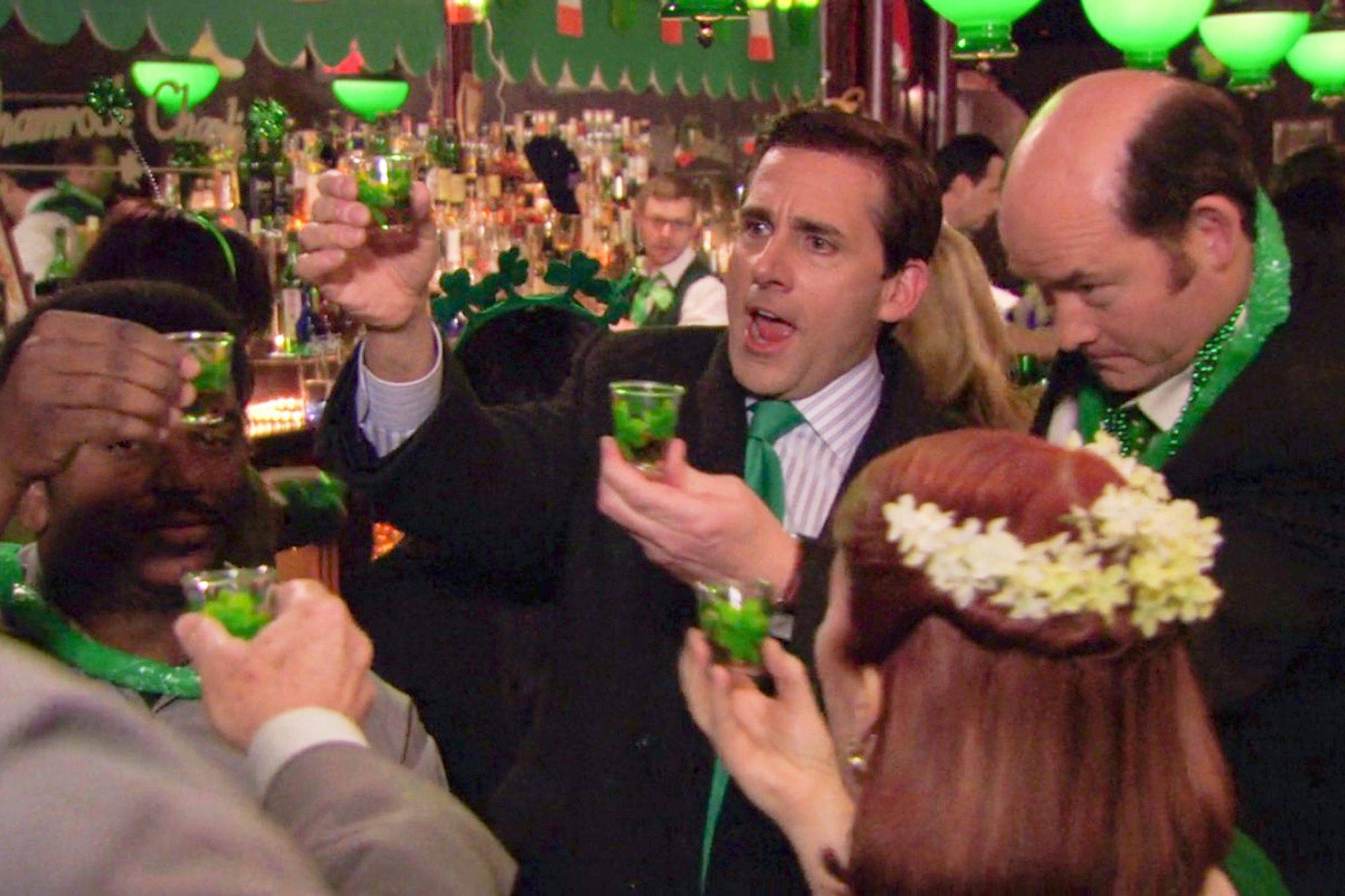 Of course, there are several side stories flitting around the special mockumentary episode, with Dwight’s imposition of the ‘Megadesk’ on Jim, and Andy’s and Erin’s botched first date, but as usual Michael Scott is at the centre of the action with his determination to have a good time. Will the employees of Dunder Mifflin make it to the pub on time? 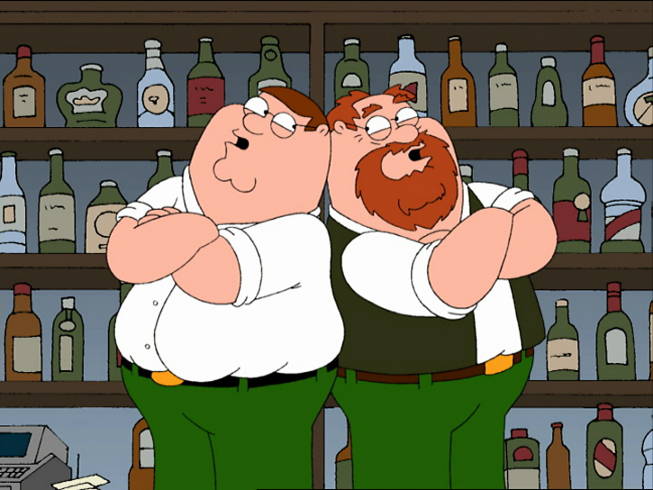 This episode actually starts off with the quite authentic St. Patrick’s Day pursuit of tracking Irish roots, which in Peter’s case leads him on a journey to the Emerald Isle itself (here we are, all jealous of Peter Griffin!).

Of course his father ends up being a vaguely offensive stereotype (basically Peter with a red beard and dubious Irish accent), but the easily offended should probably steer clear from the show in general…

The over exaggerated clichés are actually utilised to great comedic effect, and the episode even squeezes in a wee trad sesh down at Mickey McFinnigan’s (yes, I know) local bar. Creator Seth Macfarlane has even cited the episode as one of his favourites in the series, so if you’re a fan of the show and haven’t yet seen this episode, it’s definitely worth a watch.

Futurama - The Luck of the Fryrish

The space-age animation is known for delivering outrageous comedy with a few poignant moments thrown in, and the St. Patrick’s Day special doesn’t fall short on either measure.

After some bad luck at the races in the year 3000, Fry pulls his futuristic friends back to the ruins of 20th century New York in order to source a lucky clover that he had once found containing, not the traditionally rare four, but rather seven leaves. 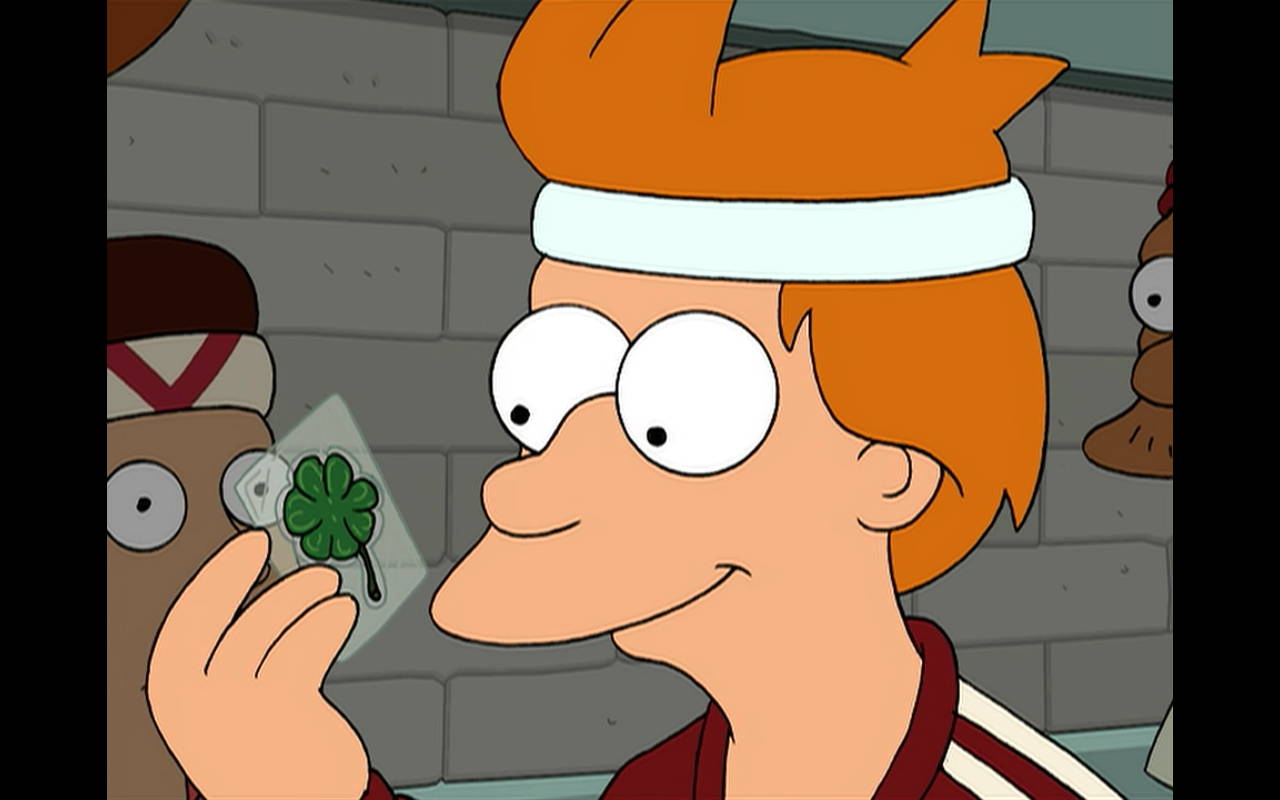 What the galactic gang do uncover is a millennium long grudge between Fry and his elder brother and go about getting revenge or making amends (you’ll have to watch to find out which). 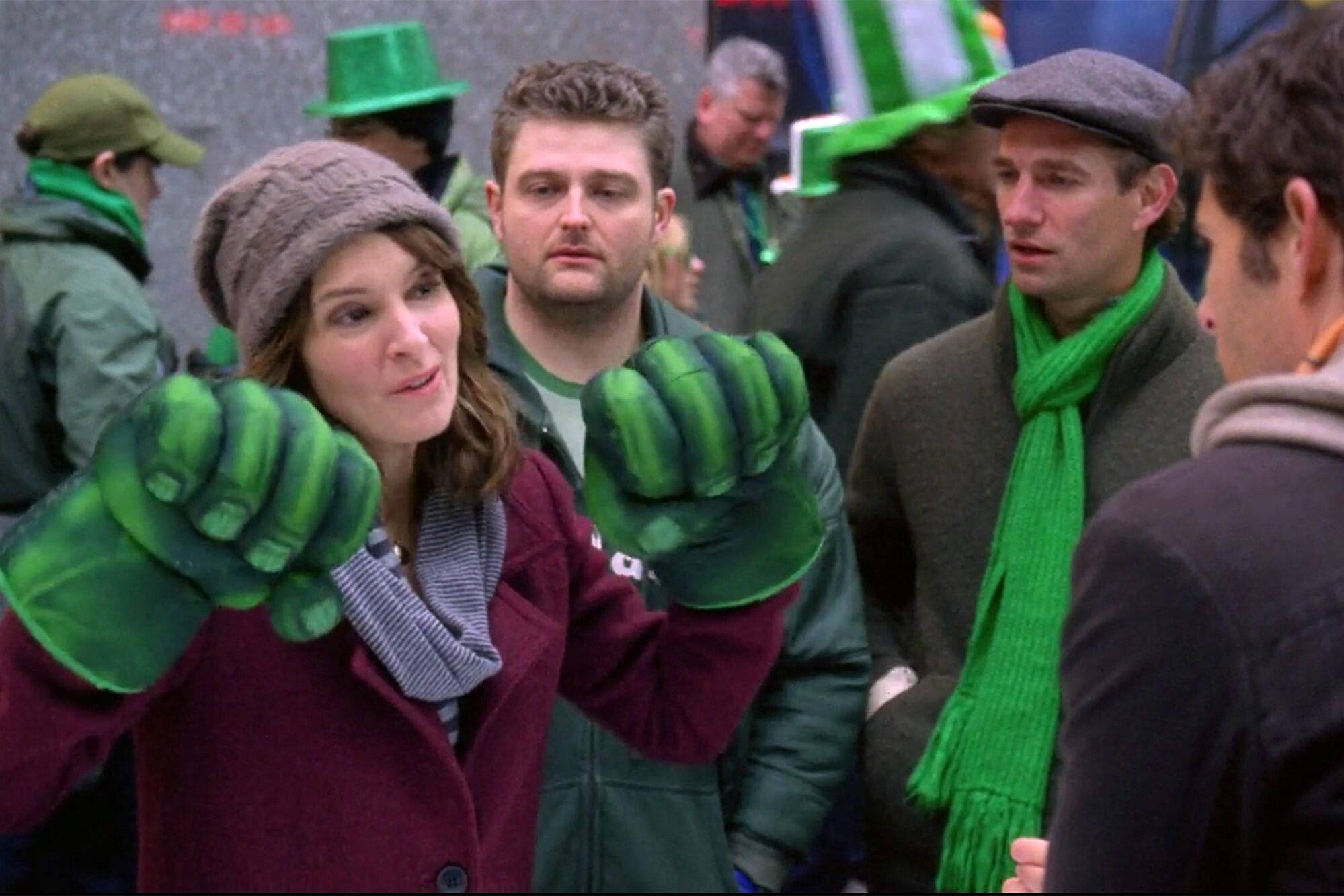 This cult comedy has a few St Patrick’s Day themes episodes, but the one that crops up in season six is one of my favourites! Liz Lemon shares some rather disdainful views of St. Patrick’s Day and the Irish in general, and plans to spend the holiday in her flat with her boyfriend mocking the displays of Celtic culture from her window. I for one was DELIGHTED when her plans were ruined by the arrival of an ex-boyfriend. How very dare she diss St. Patrick’s Day?

Elsewhere in the episode Tracy and Jenna are much more enthusiastic about celebrating all things Emerald Isle, as they fight over who gets the top billing in the St. Patrick’s Day Parade. There’s even a bit of Irish thrown in at the the start with Jack telling Liz she needs to “learn a St. Patrick’s Day lesson”, the only thing is she assumes it’s some kind of celtic curse…

While St. Patrick’s Day tends to lend itself to shows of the more comedic variety (as seen above) there are a few dramas that have dedicated episodes to one of my favourite day of the year. Of these I’m choosing to include “Charmed” on the list, mostly because their series logo takes the form of the Celtic Triquetra knot, as discussed in our Romantic Ireland blog.

Anyway “Lucky Charmed” as it is so called introduces Leprechauns as the source of mortal luck both good and bad. When the sisters discover that demons are killing the Irish imps in an attempt to steal their magic, they vow to help – with a little luck of the Irish on their side… 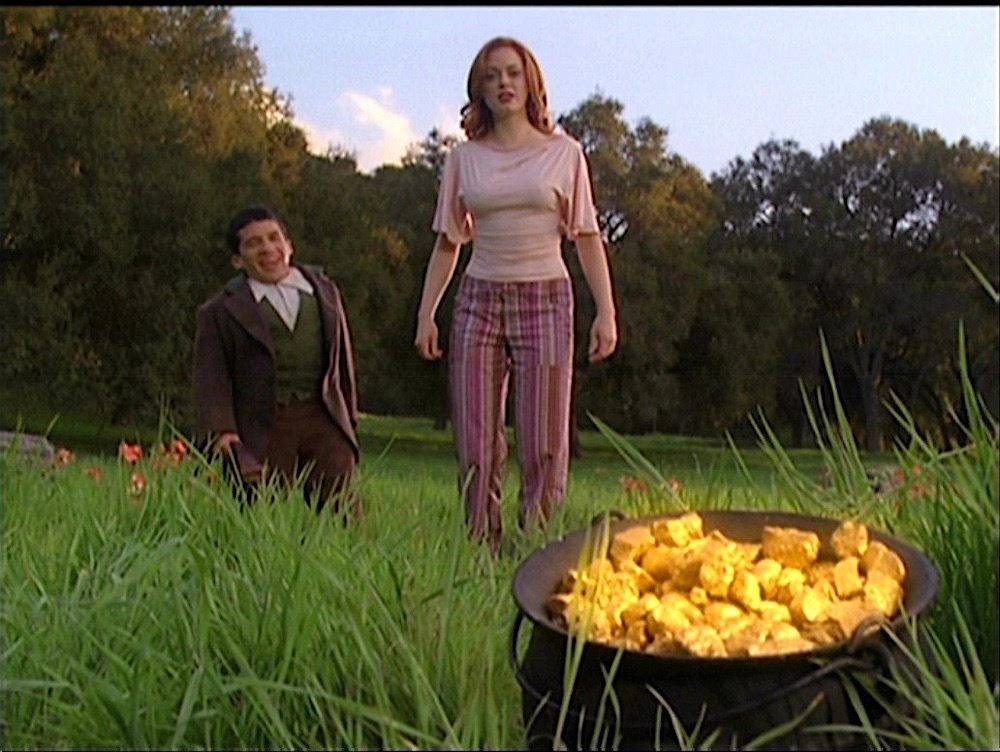 Have you got a favourite St. Patrick’s Day episode that should be added to the list? Let us know in the comments below.