The Dublin of Ulysses Despite his self-imposed exile from the city of his birth, James Joyce once said that a purpose of Ulysses was to “give a picture of Dublin so complete that if the city suddenly disappeared from the earth, it could be reconstructed out of my book.”

If you’ve traversed down the winding side streets, bustling main roads, cluttered stores and boisterous bars with Leopold Bloom and Stephen Dedalus – then you’d probably agree that the author achieved just that. His attention to detail of his everyday surroundings has often caught me staring in awe at seemingly ordinary corners of Dublin, as I imagine them coming to life in the world of Ulysses. The Guinness Storehouse actually used to have quotes from Joyce’s work etched on the windows of its panoramic Sky Bar, describing the pieces of Dublin that could be seen through the panels. 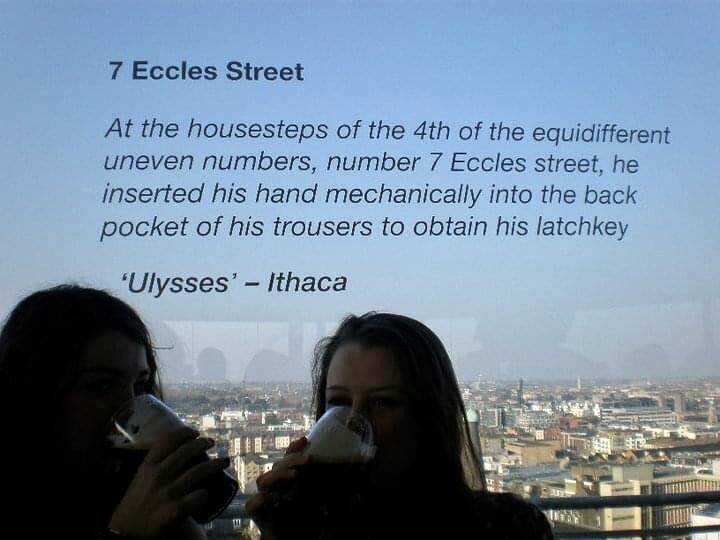 It would be absolutely impossible to list all of the streets and monuments that crop up in the book (the Wandering Rocks Episode must mention about fifty all on its own) but below I’ve highlighted a few points of interest that play a major role in the narrative of the novel.

If I’ve missed out your favourite Joycean haunt please do hop along to the comments section to tell us of your own Dublin Ulysses! 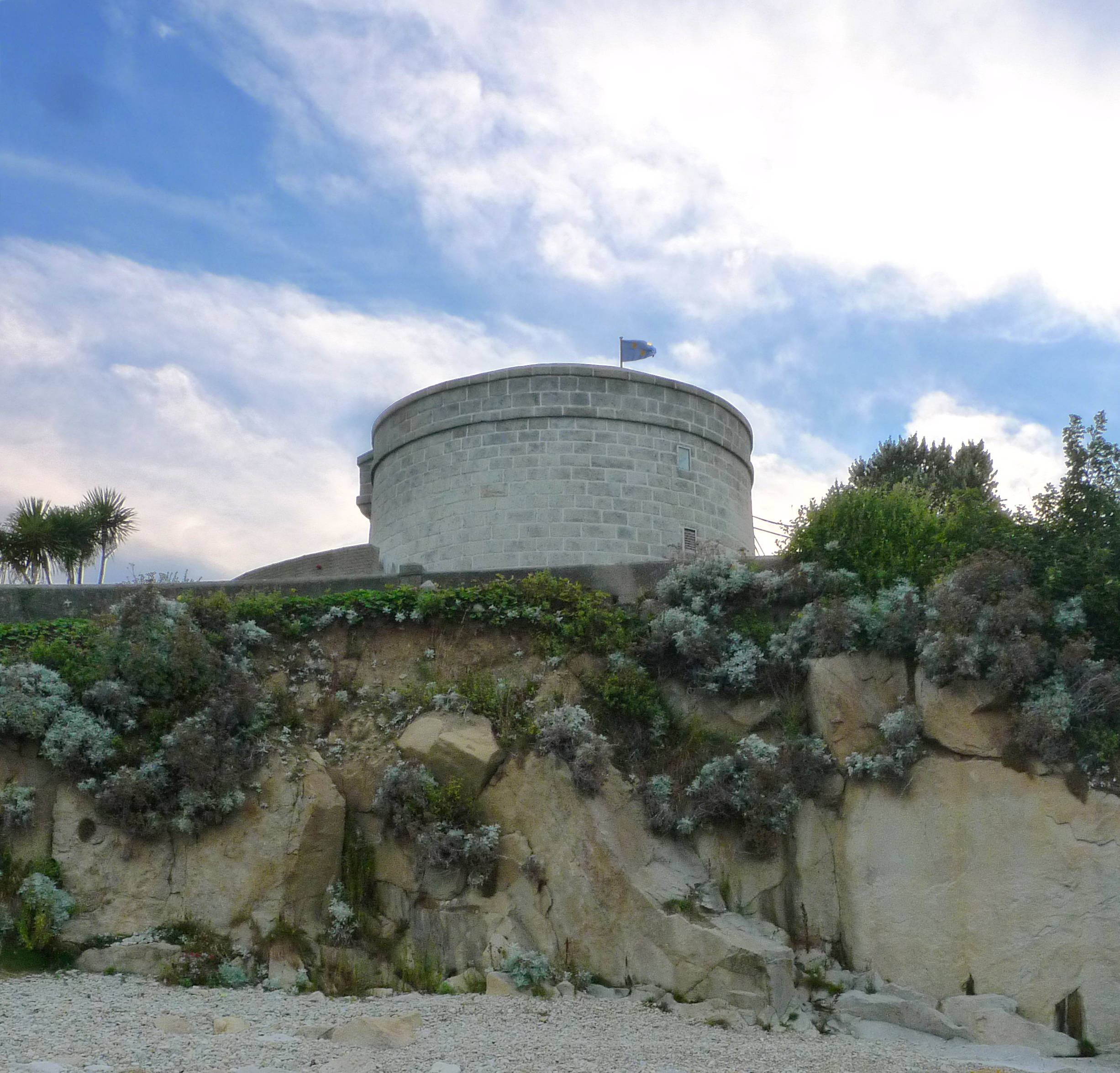 We’ll begin with the Sandycove Martello tower - after all, it is the site that Joyce chose as the opening scene for his masterpiece. Here we meet Stephen (for the first time if you haven’t already read A Portrait of the Artist as a Young Man), who is unhappy with his current living arrangements with the ostentatious Buck Mulligan and the English-man Haines.

By the end of the Telemachus chapter, Stephen leaves his abode for the day vowing not to return that evening. However, the tower itself will always be remembered as his home – or more accurately the home of Joyce himself, as the incident was very much based on the author’s real-life experience.

Today it exists as the ‘James Joyce Tower and Museum’, where you can explore many of the author’s own possessions as well as props relating to the novel, with the rooms being restored to the state they would have been while Joyce himself lived there.

This famous Dublin beach notably crops up in two separate chapters of Ulysses – primarily as the site of Stephen’s stream of consciousness which pours out in the third chapter of the book – Proteus. The shapeshifting philosophical musings of the young intellectual’s mind provide us with one of the rather more difficult parts of the novel, but don’t let that put you off – you haven’t even met Leopold Bloom yet!

Speaking of which, Leopold Bloom also ventures to this beautiful stretch of coastline much further on in the novel, during the Nausicaa episode to be precise. I would tend to say he took more pleasure than strictly necessary from the views there – which incidentally was the main reason for the book being banned for indecency… 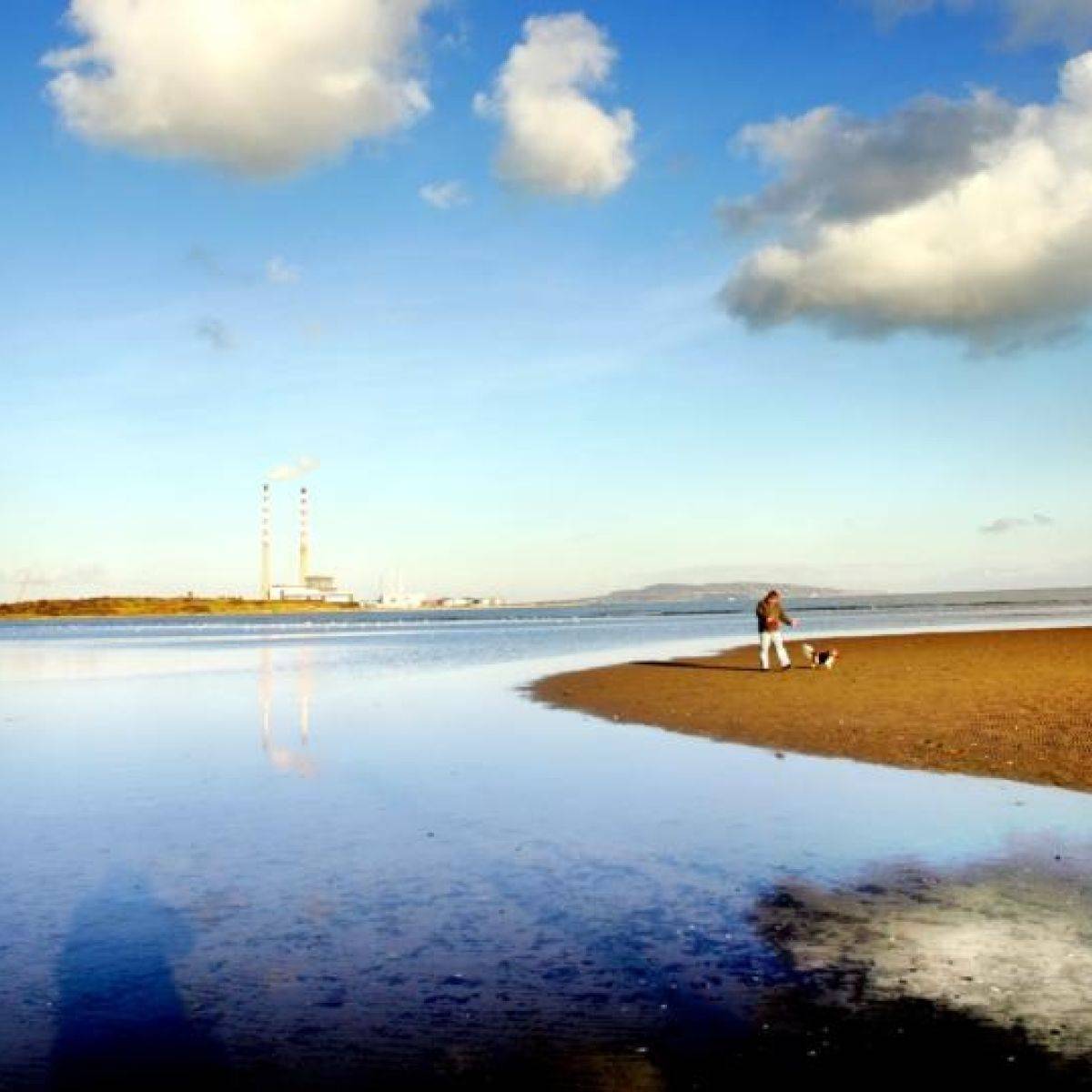 Stephen and Leopold’s contrasting experiences aside – Sandymount Strand is a beautiful side of the city, and one you simply must visit for yourself if you find yourself visiting Dublin on one of its milder days.

Of course, we meet Leopold Bloom far before his ‘misadventures’ at the beach, at his own home in Eccles Street before his epic journey through Dublin begins. The address was actually the temporary home of Joyce’s friend John Francis Byrne, whom he visited once in a state of disarray to seek comfort under the suspicions that his beloved Nora had been unfaithful. Perhaps it’s then unsurprising that he picked the building to be the site of Molly Bloom’s affair… 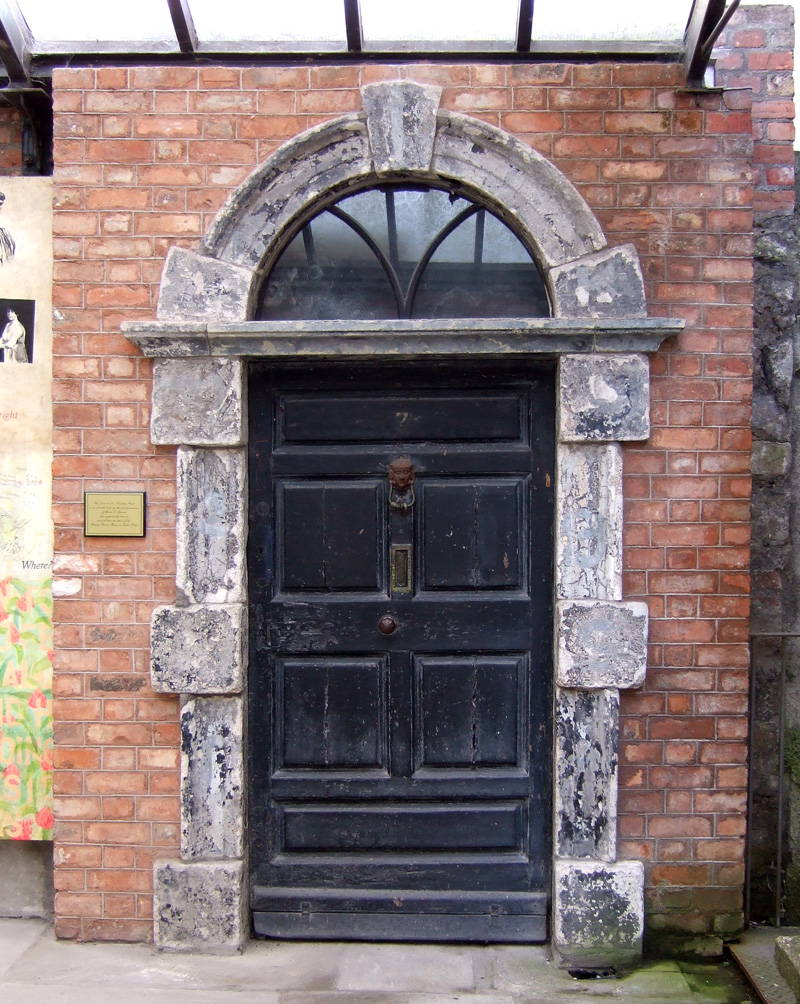 Unfortunately, the Bloom’s supposed residence was knocked down in the 1960’s, but not before some Joyce fans were able to step in and save some crucial mementos to mark both the beginning and the end of Bloom’s Ulysses.

The front door of the house was saved by a writer John Ryan, who installed it in his nearby pub, before gifting it to the wonderful James Joyce Centre on North Great George’s Street – where it can be appreciated by Joyceans from all over the world. Ryan was also very much involved in organising the first official Bloomsday, which took place in 1954.

7 Eccles Street is now occupied by a private hospital, but if you wander down the street it won’t be long before you come across St George’s Church – the bells of which Leopold Bloom can hear tolling on a Sunday morning from his home.

At 11am Leopold Bloom embarks on a horse-drawn carriage journey with some acquaintances (who include Simon Dedalus, Stephen’s father) to the funeral of Paddy Dignam.

The first part of the episode is concerned with the conversations that occur in transit where the group touch upon a number of themes that pervade the narrative of novel – including Bloom’s status as an outsider due to the antisemitism that he is subjected to.

Eventually the group arrive at Glasnevin Cemetery itself, the consecrated grounds in which Stephen’s mother and Bloom’s mother and infant son are also buried. As well as being the finally resting place for the loved ones of Ulysses, many of Joyce’s immediate family have been buried here – including his own mother. 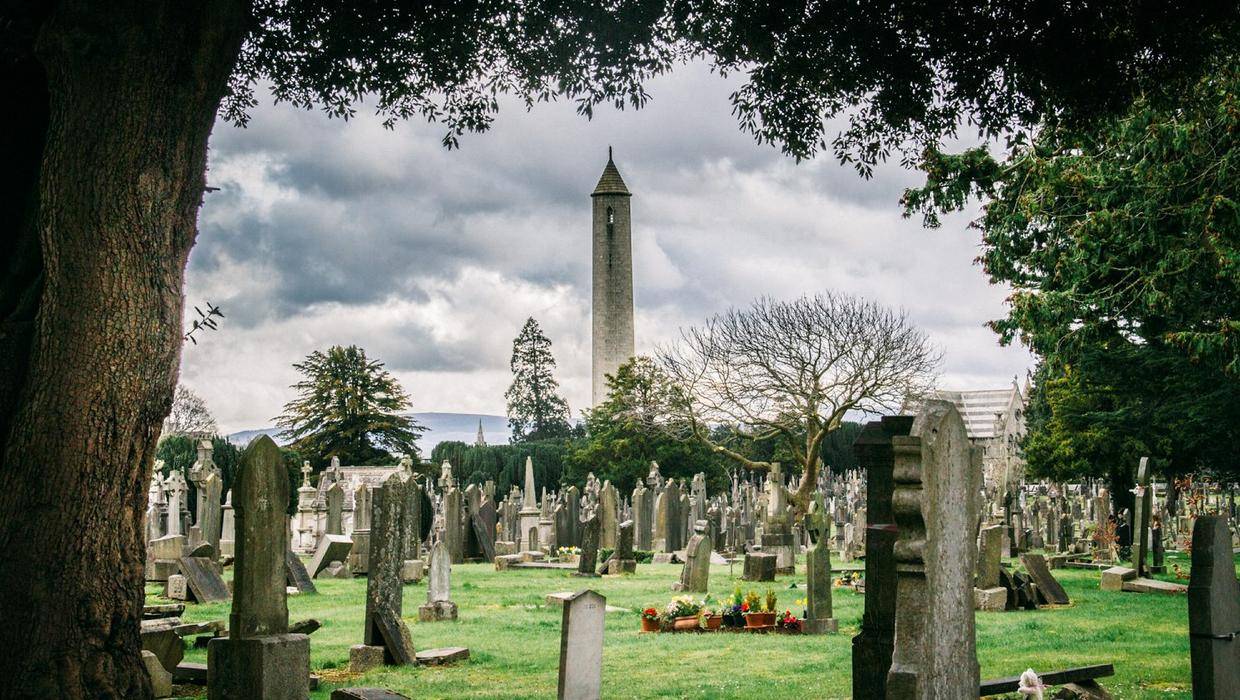 Glasnevin is Ireland’s largest burial site, and many figures in its history have been laid to rest here including Michael Collins, Maude Gonne and those who perished in the 1916 Easter Rising. The cemetery is also home to a museum, which explores 200 years of Ireland’s history through the lives of those who are buried in its grounds. 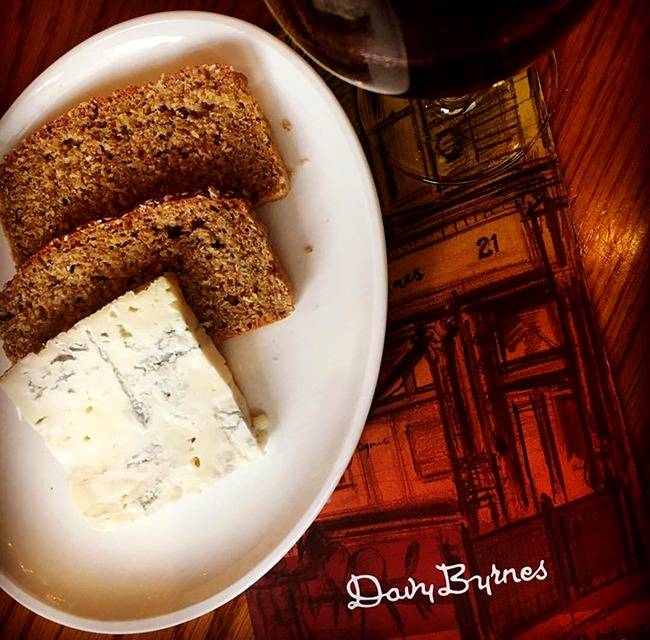 By 1pm food is firmly on the mind of Leopold Bloom as he moves through the belly of Dublin in search for a suitable spot for lunch.

He settles on Davy Byrnes pub, where he orders a light lunch of a gorgonzola sandwich accompanied by a glass of Burgundy. It is in fact the very dish that you would enjoy if you were to visit the same establishment on a Bloomsday tour of Dublin. The charming pub has stood at 21 Duke Street since 1786, and has welcomed the surge of Ulysses aficionados that have poured through its doors since Bloom’s fictional lunch on the 16th of June 1904.

If cheese and wine isn’t your thing though, don’t worry – there’s a delightful culinary range on offer, and we’re sure Mr. Bloom wouldn’t have objected to a seafood platter washed down with Guinness either.

After lunch Bloom hot foots it to The National Library where he has an appointment to discuss an advert he is working on in his capacity as an ad canvasser. His terrors of coming face to face with Blaze Boylan, the man who is to rendezvous with his wife later on that very afternoon, very nearly comes to be as he narrowly avoids his straw-hatted nemesis by pretending to be fascinated by the architecture of the building.

As it so happens the architecture is definitely worth paying attention to – established in 1844 the front facade boasts an impressive rotunda built in the classical style which is well worth snapping a picture of.

It is a reference library, so you wouldn’t actually be able to borrow a book, but rather freely consult one of the eight million items of its collection – including maps, photographs and even personal notebooks from James Joyce himself. 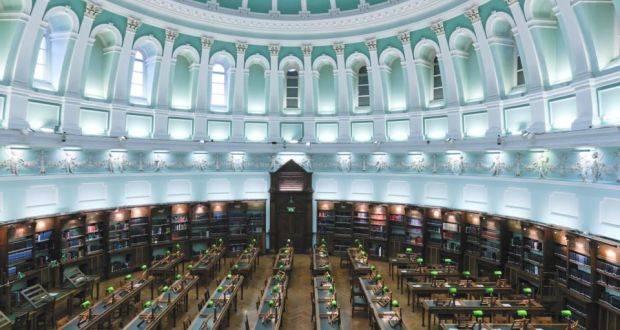 The library is the very same spot where Stephen delivers his Aristotelian hypothesis of Shakespeare which sparks a rather perplexingly academic debate with his peers. The two main characters briefly pass each other towards the end of this Scylla and Charybdis episode, but don’t actually properly communicate until later in novel – when Bloom takes it upon himself to rescue Stephen from his drunken spiral.

Of all the places mentioned throughout the course of Stephen and Leopold’s day, I have to say that my favourite is a place that is visited in mind rather than body.

Both Leopold Bloom and Molly fondly reflect upon the memories of Bloom’s proposal at Howth Head, each reliving the moment in their minds giving us a different perspective of the same life-changing event. Molly refers to it perhaps most famously in the final Penelope episode of the novel: “the sun shines for you he said the day we were lying among the rhododendrons on Howth head in the grey tweed suit and his straw hat the day I got him to propose to me yes”.

She then goes on to, despite her affair of the afternoon, reaffirm the love she felt on that day in Howth Head (rather sensually it has to be said) as she lies in bed next to her husband after his Odyssey of Dublin. 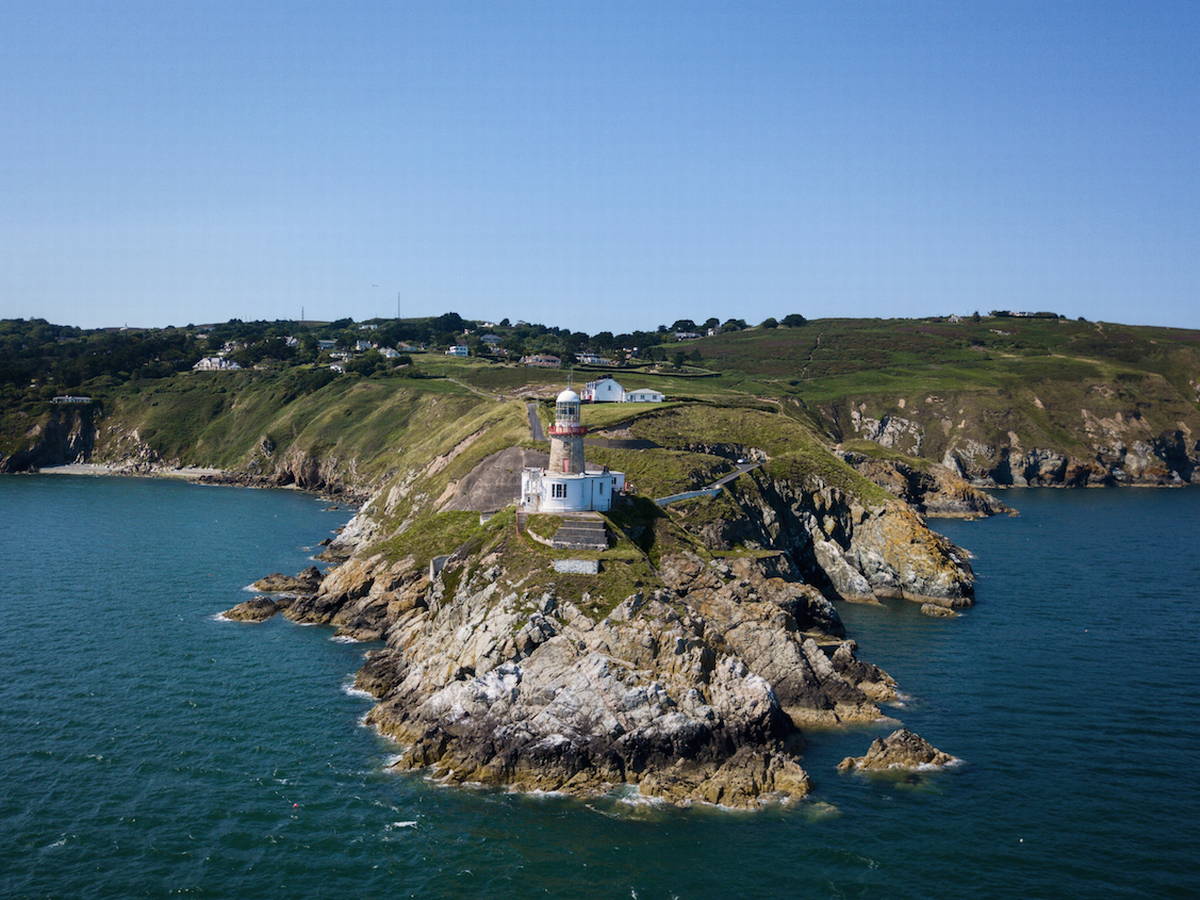 The spot itself is perhaps too far out to be included on a typical Bloomsday tour, but spending an afternoon there is certainly feasible – as it is less than an hour from the centre by public transport, and certainly worth the effort.

Take the Howth cliff walk to breathe in the perfume of the rhododendrons that so fascinated one of Ireland’s greatest authors. As you hike you can’t fail to feel the inspiration that surrounds you in the green hills, crashing waves and stunning views of Dublin’s hidden gem - the spot where the Bloom’s marriage began its epic journey.

Of all the places above which would you most like to visit on a trip to Dublin? Let us know in the comments below!