The History of the Aran Knit Jumper From the boats of local fishermen, to the steps of the MOMA in New York - the Aran Knit jumper has developed from a functional staple to a fashionable statement in just 130 years.

While it’s now often pristinely portrayed as a luxurious commodity (such as when seen on the back of Chris Evans’ character in the 2019 big screen blockbuster ‘Knives Out’), the Aran Knit was born from a modest background - a hardy piece of clothing to bear the brunt of the stormy waves and muddy sands, while keeping its wearer warm and dry in the process.

As part of our “Spinning a Yarn” series, we’re taking a closer look at one of Ireland’s most famous exports, and its cultural significance in both history and the world of fashion.

So cuddle up and read on, and don’t forget to subscribe to this month’s beautifully themed box, to get a little bit of Irish yarn spun your way… 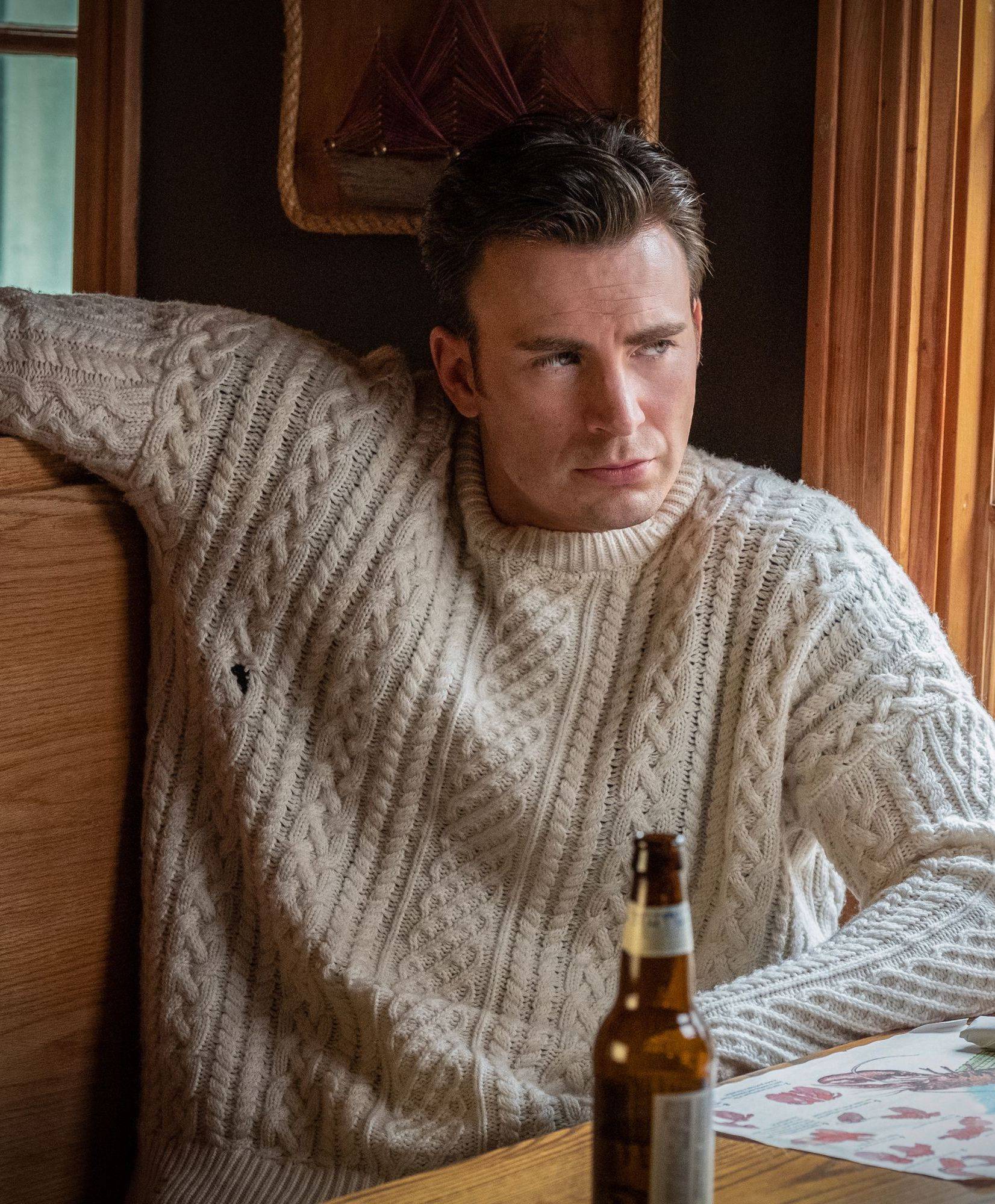 The Beginning of a Timeless Classic 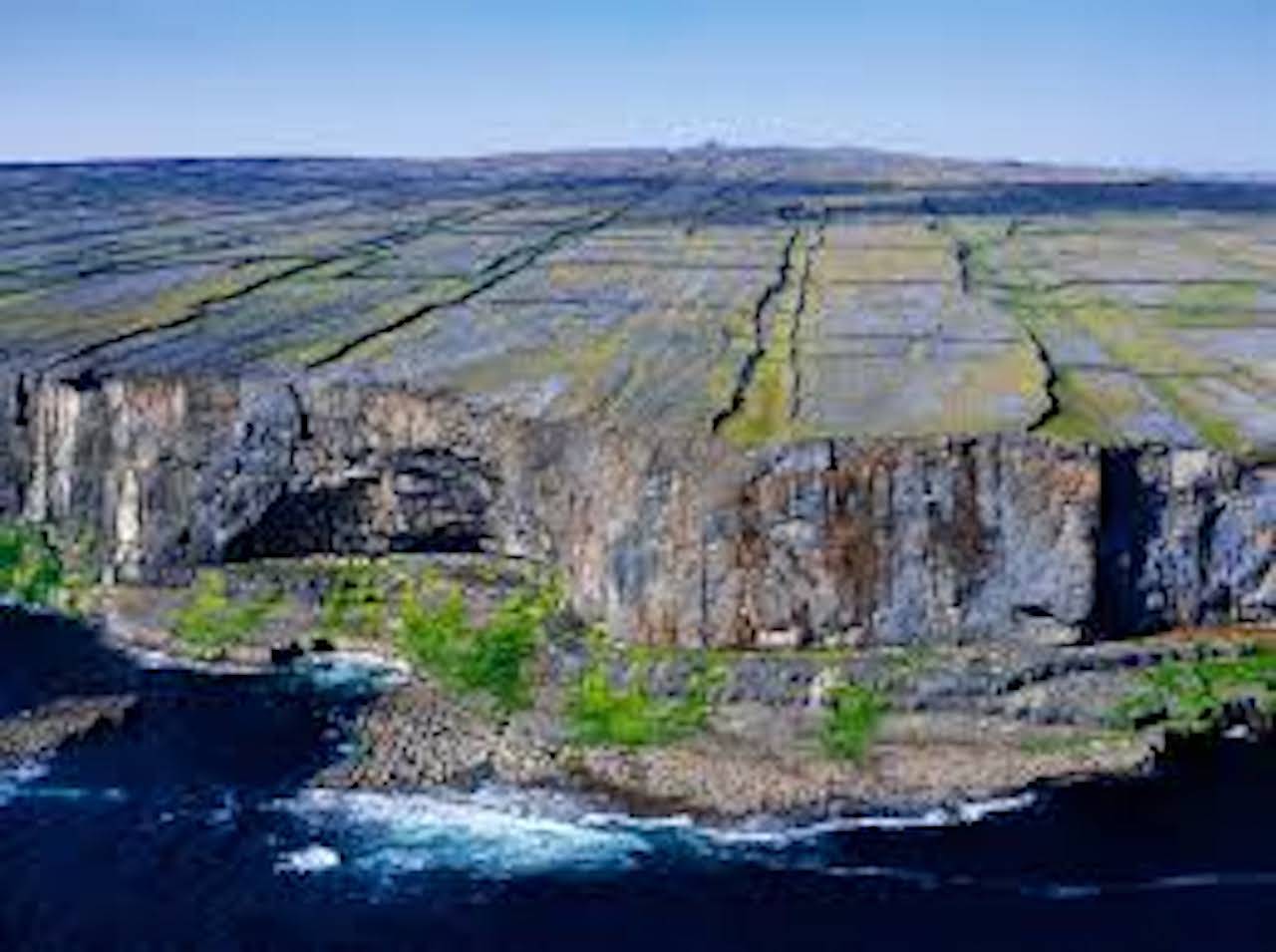 Unsurprisingly, the humble Aran Knit Jumper hails from the Aran Islands - a group of three small masses of land clustered in the mouth of the Galway Bay between Co. Galway and Co. Clare.

The iconic interlacing weaves and cables may seem synonymous with the Ireland of yore, but in actual fact historians date the origins of the jumper back as recently as the end of the 19th Century.

It is thought that the concept of the Aran Knit was born as a result of an initiative of the British Government to help alleviate poverty and emigration from Ireland – especially in the fishing communities of the West which were experiencing particularly difficult living conditions.

Fisherman and their wives from across the British Isles visited the isles of Inishmore, Inishmaan, and Inisheer to share their expert methods of both catching fish and knitting.

From here, the fishermen’s wives of the Aran Isles moulded the methods of the Guernsey jumper (which they had learned) into their very own craft. The wool they had available was much thicker than the finely spun threads of their Scottish visitors, and it was knitted without being scoured as was customary. This enabled the fabric to retain the sheep’s natural oils – lending a water-resistant element to the final product that would keep the fishermen warm and dry on the boats.

The patterns which had originally only been found at the neck and shoulders of the Guernsey jumper were extended all over each item of clothing – giving Aran knitwear the distinctly busy designs for which it is now famed.

A typical Aran Knit jumper (or sweater if you hail from the other side of the Atlantic Ocean) is generally the creamy not quite white colour of undyed wool. Nowadays of course you can purchase an authentic garment in all the colours of the rainbow, but the classic cream colour is undeniably the most iconic.

A jumper is generally comprised of a collection of different textured patterns, (usually between four and six) which run in symmetrical vertical columns up and down the body of the jumper and down the sleeves. There are various myths surrounding these patterns – such as the honeycomb arrangement representing luck, or the blackberry stitch signifying nature – but there is no evidence to 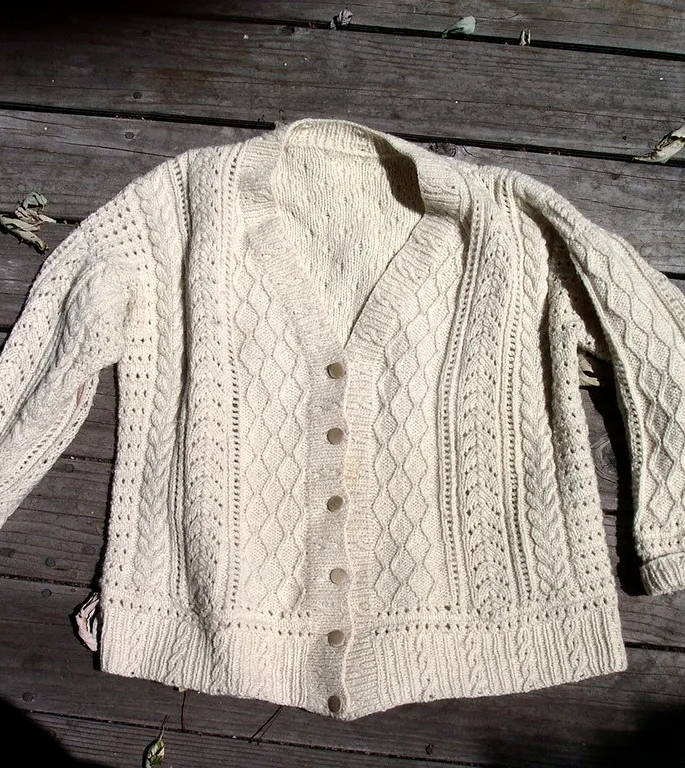 support these tales and they are more than likely just romantic fabrications.

There were also tales of fisherman who had periled at sea, washing up on shore and being identified by the unique family stitching of their jumpers - but this again was never an intentional function of the Aran Knit. Although, as each garment was hand knitted (in a process that could take anything from three to six weeks) it is likely that each knitter would have their own distinct and recognisable style that they would pass on to their daughters as they taught them how to make the jumpers.

From Galway Bay to Across the Atlantic 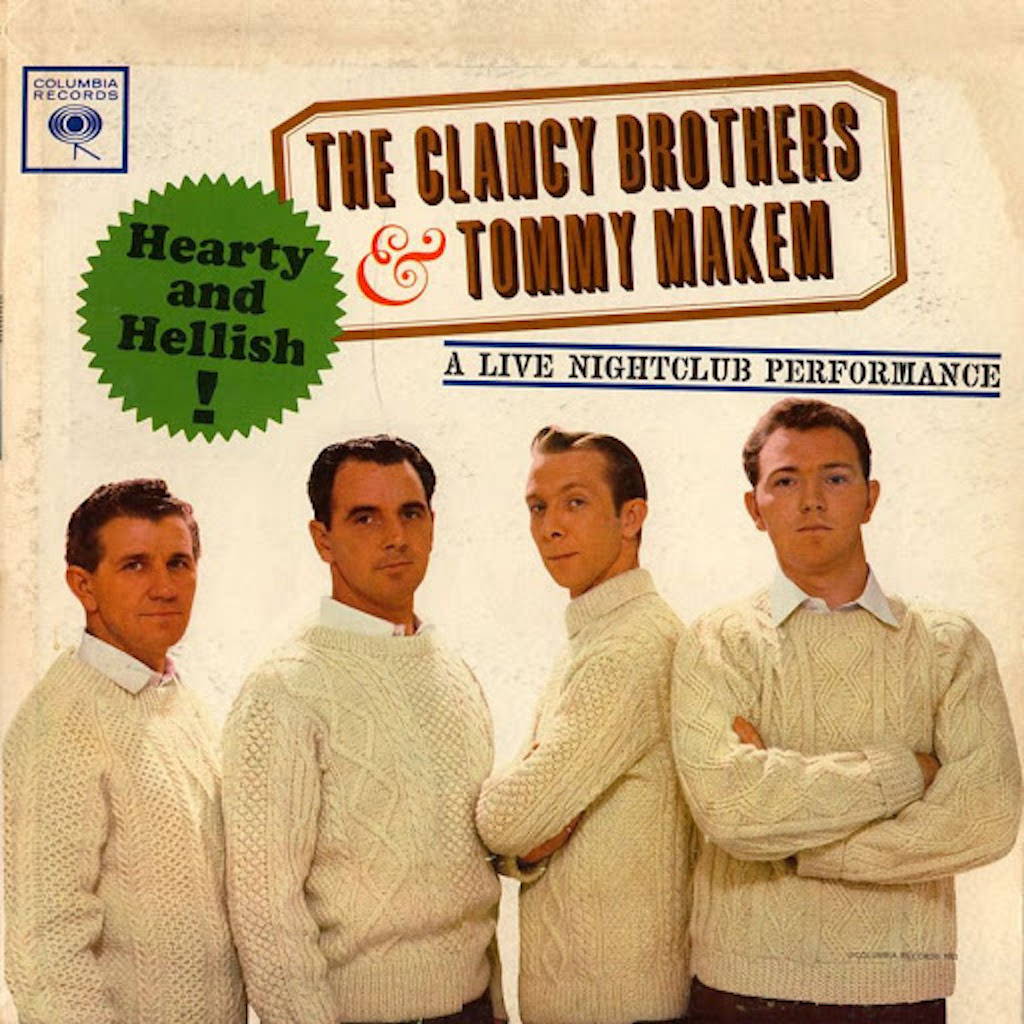 It took an incredible amount of creative and mathematical talent to visualise and reproduce the Aran Knit patterns throughout thousands of stitches of rough hand-spun wool. All of this was done from memory, until Paton’s published the first Aran Knitting pattern in 1940. Today the process has been dramatically simplified with the majority of sweaters knitted with the help of machinery or hand looms, and very few are commercially produced by hand.

As well as Paton sharing the secrets behind the stitches, Vogue also featured articles on the Aran Knit jumper in the 1950s. These extra

examples of exposure coincided with a terrible bout of snowstorms in New York City – prompting the mother of travelling Irish folk musicians to send her sons and their bandmate some nice warm jumpers. This sealed an iconic look for “The Clancy Brothers and Tommy Makem” and their big break occurred almost simultaneously with a boom in international orders for Aran Knit sweaters.

With a combined population of just over 1,000 in the Aran Islands, it’s not possible for the inhabitants to meet the worldwide demand for the distinctive pullovers that exists today. Unlike products such as Champagne, which must be created in a particular region in France so as to be considered Champagne at all, an Aran Knit jumper does not need to be made in the land of its namesake to be considered authentic. The timeless knitwear is produced all across Ireland for both domestic and international buyers and can in fact be created anywhere in the world - as long as it adheres to the design and quality standards.

An Icon in both Fishing and Fashion

This relaxed criteria has allowed Aran Knit jumpers to cover backs, warm torsos, and permeate the pages of fashion magazines all over the world. Everyone from Ralph Lauren to John Paul Gaultier has drawn inspiration from the Irish classic and it’s very much an integral part of twentieth century fashion.

So much so, that the Aran Knit Sweater was featured alongside the little black dress, bike jacket and the string of pearls in the 2018 Musuem Of Modern Art exhibition in New York: ‘Is Fashion Modern?’. The collection aimed to explore the historical significance of iconic clothing that had hugely impacted the world throughout the 20th and 21st Centuries and continue to hold culture relevance and demand in today’s world of fashion. 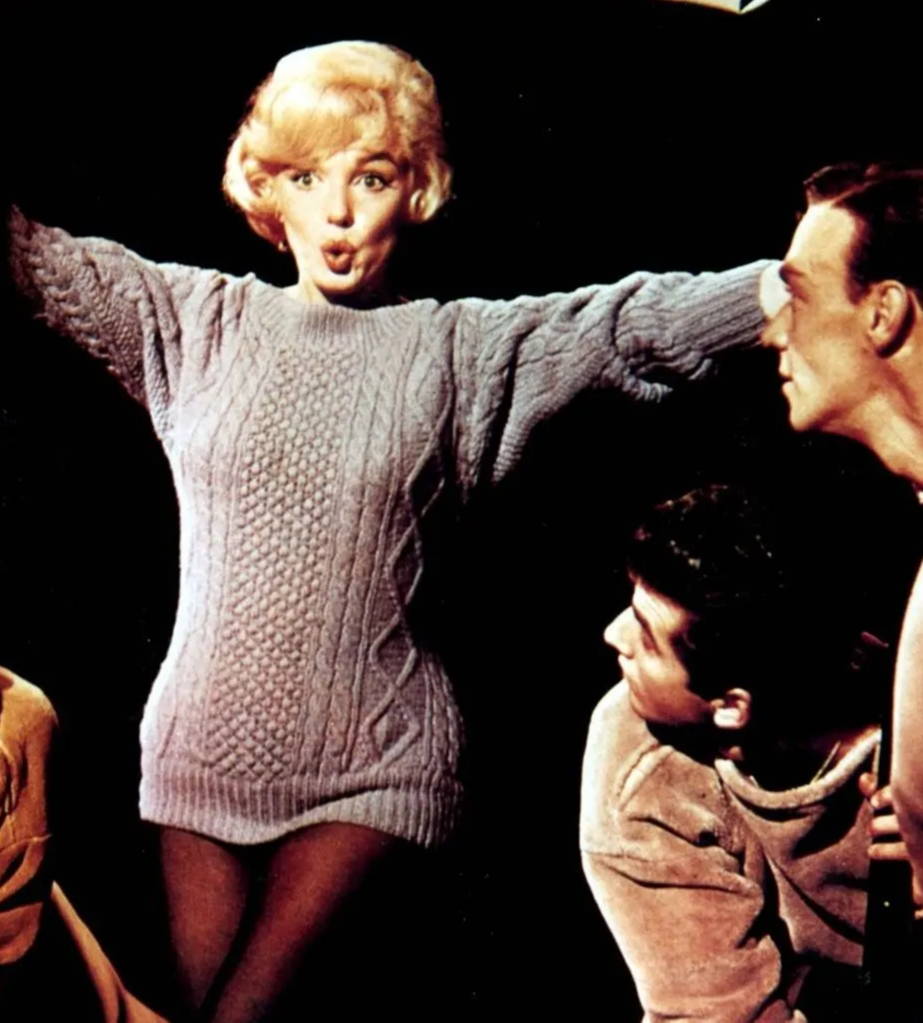 The Aran Knit jumper that was displayed amongst the 110 other exhibits dates back to 1940, and was lent to the MOMA especially for the occasion by the National Museum of Ireland in Co. Mayo!