The Irish History of Spinning a Yarn The art of weaving involves interlacing lines of yarn, to build a piece of material, and this practice has been woven into the fabric of Irish culture as far back as any memories can stretch.

Today the beautiful wool products of Ireland are known across the globe, from cosy knitted scarfs to the iconic Aran Knit jumper. Sometimes this beauty can be found in the wonderful patterns depicted in grand tapestries, and occasionally just the natural creamy colour of the wool on a classic item of clothing.

Whatever the results, the thread of Ireland’s history with weaving is a yarn that spins back quite some time… 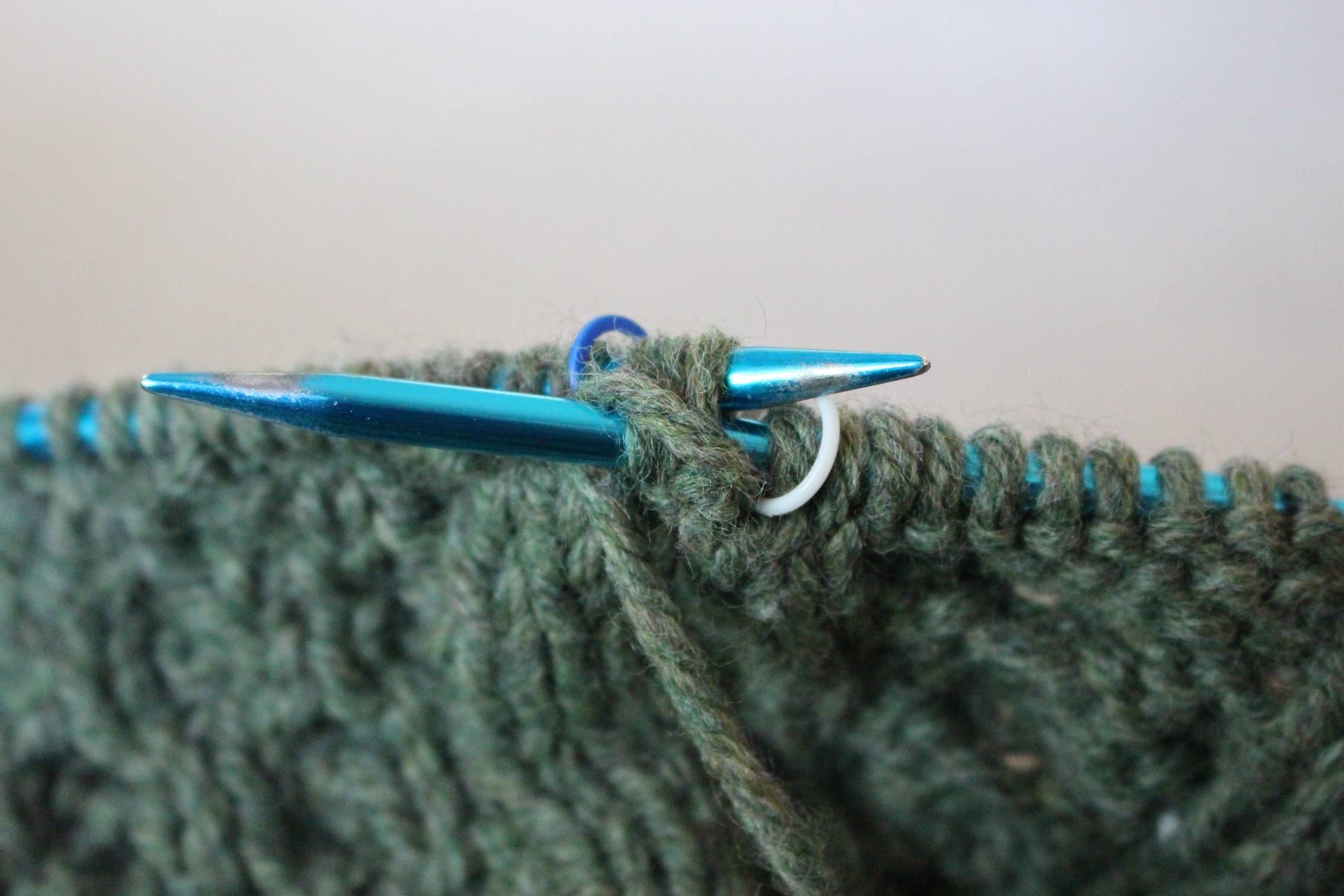 How long is a piece of string?

Weaving has been at the centre of folklore for centuries – from tales such as Mother Goose, to Rumpelstiltskin and even Sleeping Beauty. However, Ireland’s true story of weaving goes back far beyond the tales of the Brothers Grimm, with evidence of the practice dating all the way back to the late Stone Age.

If you visit the National Museum of Ireland today you can even see a woven piece of fabric which was found in Co. Antrim and dates back nearly 3,000 years. However, more recent evidence pointing to the importance of weaving in the everyday lives of the Irish can be seen in the early medieval decrees known as “Brehon Law”. This stated that in the case of divorce, a woman was entitled to her fair share of the weaving tools and wool products that she had spun during the marriage. (Incidentally, these laws seemed to be fairly ahead of their time in terms of gender equality – but that’s a story for another day…)

Not Quite Two Shakes of a Lamb’s Tail… 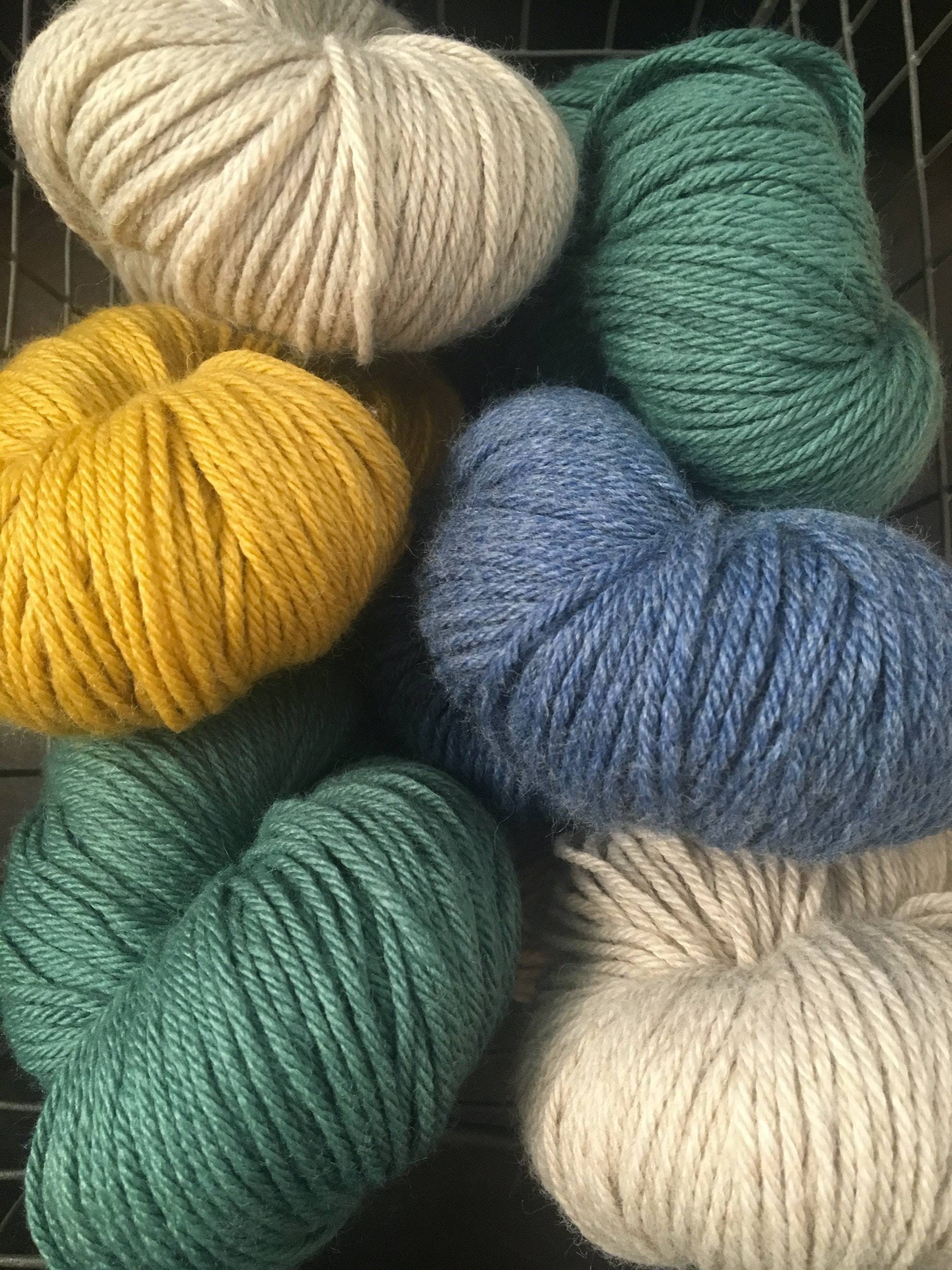 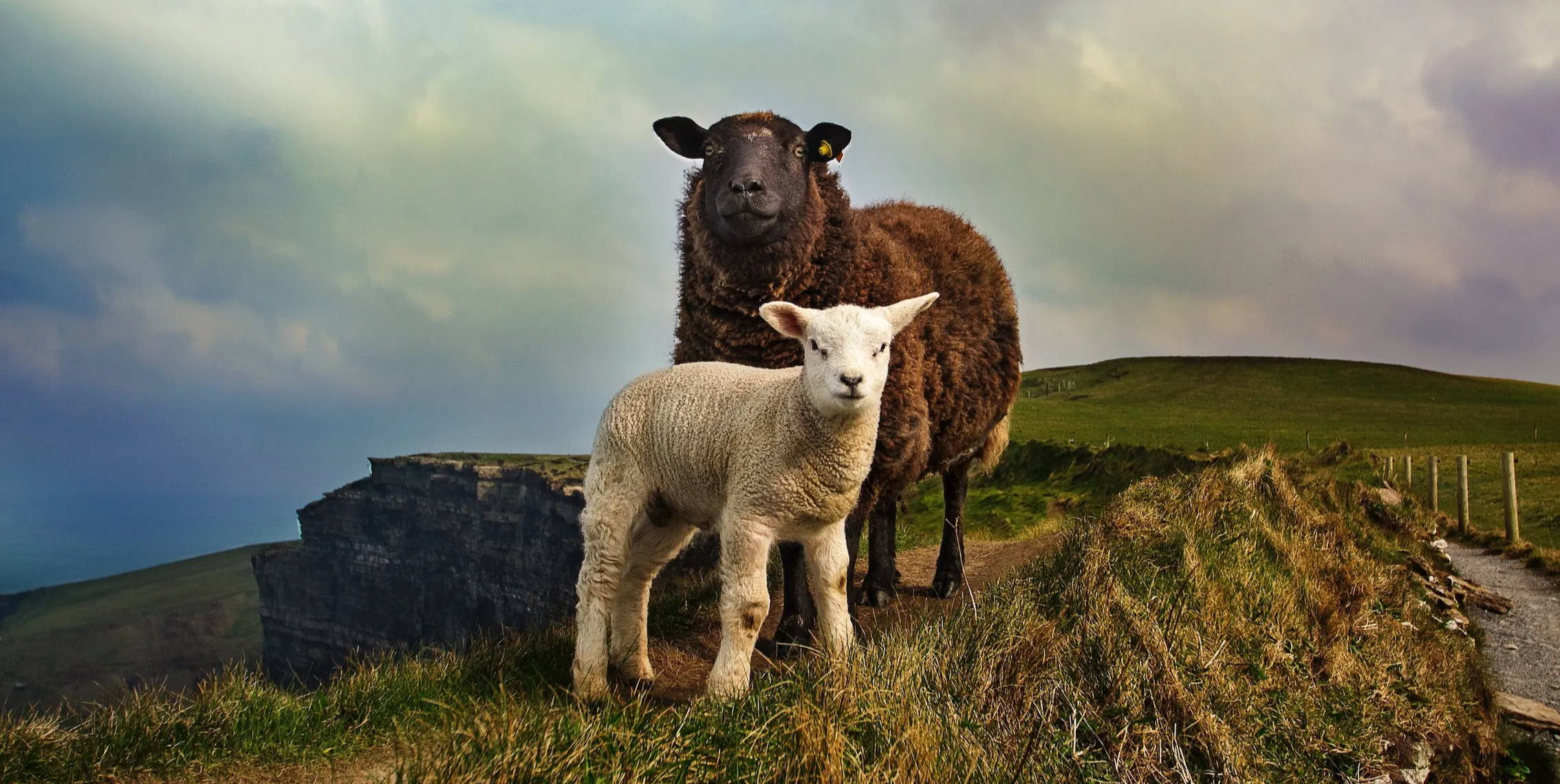 The weaving process in Ireland normally took place on farms where the weaver had access to their own flock of sheep, whose coats could be sheared to provide the wool needed for weaving.

However, before the wool could be used to make actual fabric, it had to undergo a number of treatments. Back then chemical dyes had yet to be invented, so natural colourants such as vegetable dyes, blackberries or even beetles were used to give wool an interesting tint.

The wool then had to be smoothed and untangled, which was done using what is called “hand cards”. These looked a bit like a pair of flat hairbrushes which the fleece was worked between in order to get it ready for spinning.

Once a sheep’s coat had passed through the spinning wheel, it came out looking much more like what we would expect of wool – in nice thick threads known as yarn. These would then be fed into a loom – which warps the threads at right angles in order to weave them together into a cloth or tapestry. 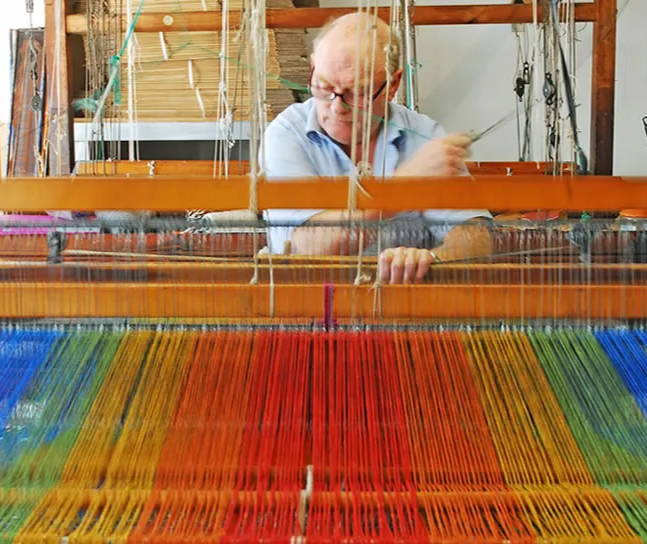 Of course, smaller and more delicate items, such as scarfs or jumpers, could also be hand-knitted from the yarn instead of using the loom – which was more time consuming, but less physically tiring!

Looms themselves started as quite a laborious process, involving a lot of manual work and attention, which developed over time to be more user friendly. For example the “flying shuttle” which was created by English man John Kay in 1733, took the thread from one side of the tapestry to the other – halving the time and effort required on the part of the weaver, as well as nullifying the need for two people to work on wider pieces. This innovation was a huge step towards the industrial revolution, which saw the handiwork of textiles becoming mass produced through use of machinery.

However, if you feel like take a trip down memory lane there are lots of places in Ireland in which you can experience the more traditional methods, including Studio Donegal and The Weaver’s Cottage at the Dunlewy Heritage Centre.

Hanging by a Thread 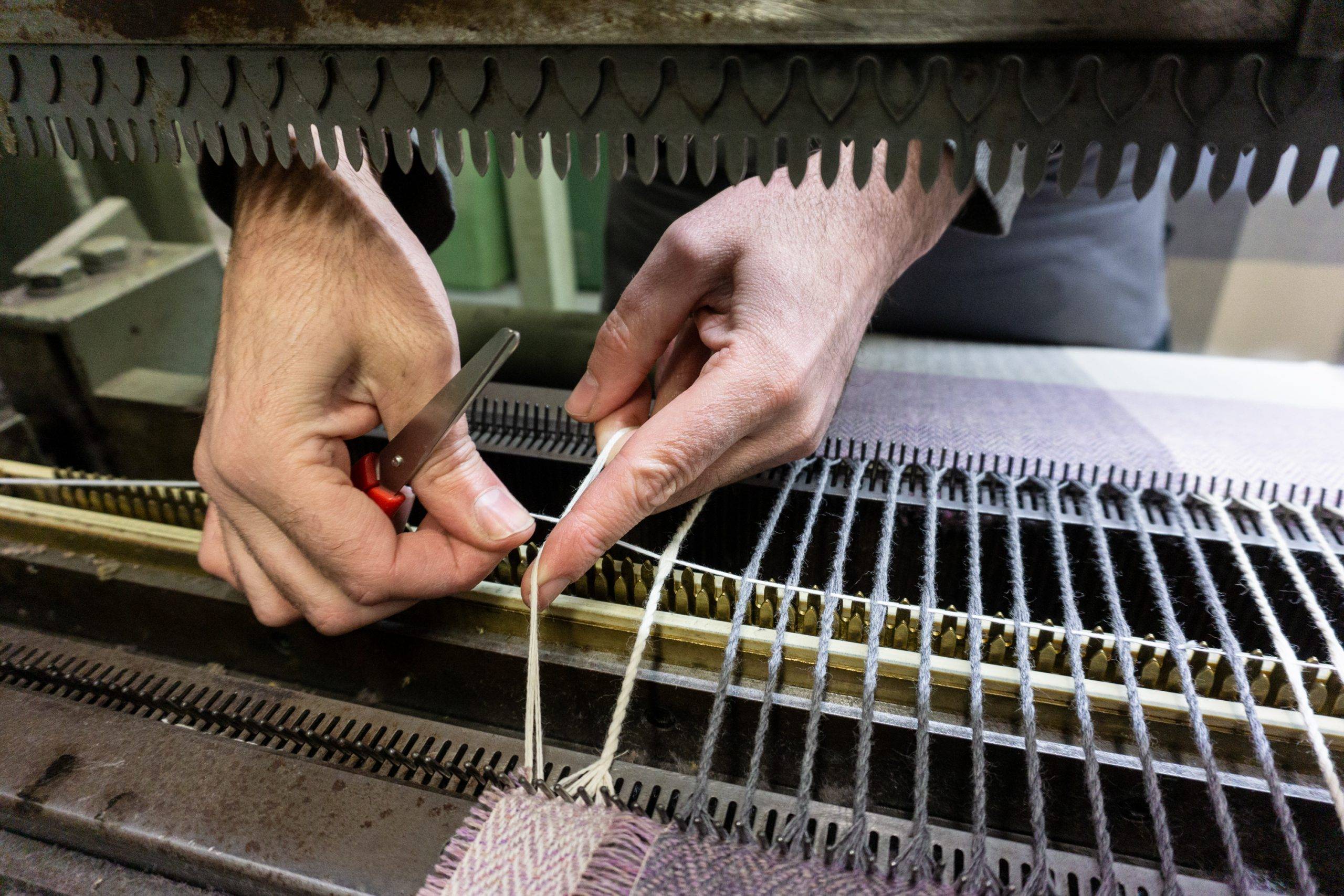 Despite its deep roots in Irish heritage and popularity today, weaving unfortunately hasn’t been a continuous success story in Ireland. Initially, the Emerald Isle was doing a roaring trade in exporting their products to Britain and beyond, but in 1699 England introduced a new act of Parliament entitled: “An Act to prevent the Exportation of Wool out of the Kingdoms of Ireland and England into Forreigne parts and for the Incouragement of the Woollen Manufactures in the Kingdom of England.” This prohibition of Irish exportation on woollen products nearly crushed an industry that had been internationally flourishing since the 13th Century and was not repealed until 1867.

In this time, the art of Ireland’s handwoven culture had nearly died out, due to the period of mass starvation now known as The Great Hunger, which saw the death or immigration of almost a quarter of the country’s inhabitants – and in which weaving as a profession was a luxury that could scarcely be afforded.

Fortunately, the traditions of the craft were preserved in counties such as Donegal, Mayo and Galway – who today are at the forefront of the revival of Irish weaving.

By the late 19th Century societies and associations had started to lend their support to the weaving industry, rebuilding its commercial footprint both domestically and abroad.

More recently the revival of interest with the fabric of Ireland’s culture has been down to the Irish Guild of Weavers, Spinners, and Dyers which was formed in 1975 by Lillias Mitchell, who was the Head of the Weaving Department at Dublin’s National College of Art at the time.

The Guild promotes, preserves and educates on the crafts of weaving spinning and dyeing, providing an abundance of workshops, exhibitions and classes for beginners and experts as they celebrate a tradition that is deeply woven into the culture and heritage of Ireland. 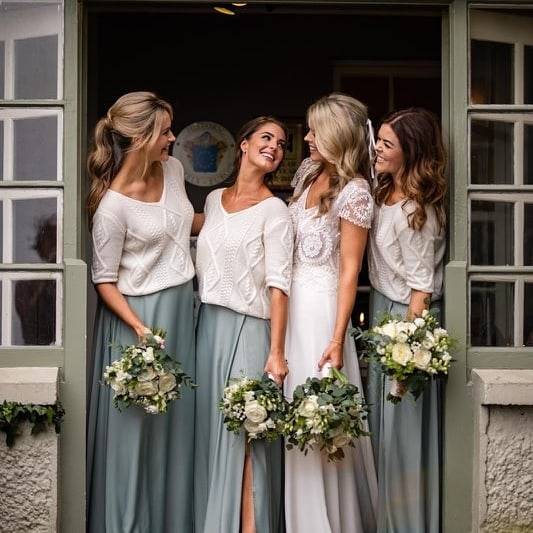 Today you can find hand-woven products all across Ireland, from traditionally knitted sweaters to funky threads for mittens and even as far as the world of Instagram with brands such as Ekotree Knitwear influencing a trendy route into sustainable fashion.