We’ve spoken a lot over these past few weeks about the secretive nature of the fair folk who roam our lands, and the efforts they go to in order to conceal their magic from the prying eyes of humans. However, so intrinsic are faeries to the stories of Irish folklore, that it stands to reason that a few mere mortals must have crossed their paths and lived to tell the tale.

Fionn mac Cumhaill was one of these such mortals, although the tales of his great strength and immense size suggest that there may be some giant’s blood flowing through his human veins… More colloquially known as Finn McCool, the hero’s wild and wonderful adventures saw him gifted with infinite knowledge, make enemies of druids, and even have a son named Oisín born of a Faerie mother. So numerous were his escapades with his followers that they form the centre of one of Ireland’s four cycles of mythology – the Fenian Cycle.

This particular tale of Finn’s dealings with the underworld comes in the collection of stories known as “Finn’s Boyhood Deeds”, suggesting he was but a child when he undertook a most dangerous quest to prove himself. 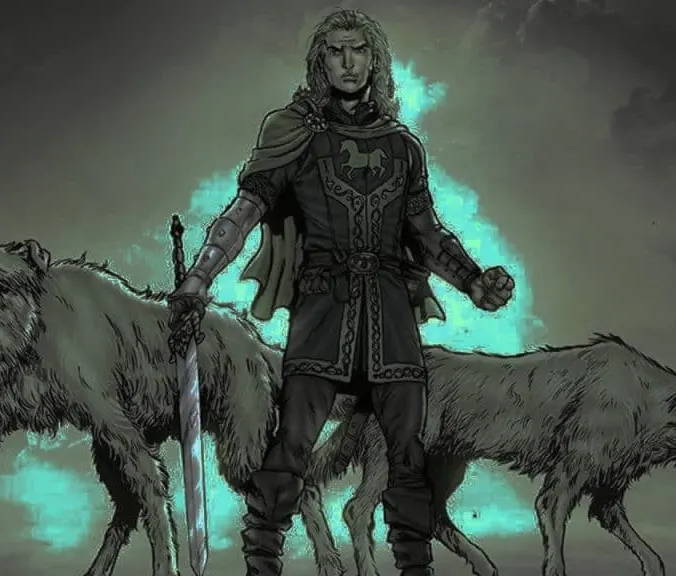 Every year, to bid farewell to autumn and welcome in the winter months, the Irish people would celebrate the feast of Samhain over October 31st and November 1st. It is said that this day (and especially the night) was shrouded in a mystic power, that weakened the entrances to the otherworld – making it all the easier for the Aos Sí to cross over into our own.

To mark the occasion, the High King of Ireland would hold a banquet at Tara for the Lords and Ladies to revel in a delightful evening of food, wine and festivities. Now if you’ve already read our “Where to find Faeries in Ireland” blog you’ll know the Hill of Tara to be a hot spot for faerie activity, so perhaps it will come as no surprise to learn that this gathering had a reputation for attracting an unwelcomed guest.

For 23 years, the feast had been plagued by the presence of a wicked and incendiary being known as Áillen, or “the Burner” to his Tuatha Dé Danann clan. Just as the fine folk of Ireland were tucking into to a delectable spread, Áillen would rear his fiery head from the Sidhe fairy mounds and wreak his havoc.

First, he would lull his quarry to sleep, with the most beautiful music plucked from his harp. His gentle notes crept in through the noise and excitement of the banquet, winding its way through the atmosphere, and before anyone could detect the mischievous magic imbued in his melodies – they were all fast asleep.

Then “the burner” set aside his instrument and lived up to his name – breathing a relentless stream of fire upon all of his surroundings and leaving disaster and chaos in his wake. The people of the feast would awaken to find Samhain passed, and their homes and treasures destroyed while the terrible Áillen had vanished from their midst.

Now you might think that the easiest course of action would be to simply hold the party elsewhere – but that would hardly be the stuff of legend. Instead the High King appealed to the smartest and bravest warriors of Ireland to help rid him of this annual curse.

Young Finn Maccool rose to the challenge, declaring that he would be the one to outsmart the creature and all he would ask in return would be to be acknowledged as leader of the Fianna – a group of warriors which his own father had led until he had been overthrown and executed.

And so, with the King’s blessing Finn attended the Samhain celebrations, but while the other attendees filled their plates and clinked their glasses, Finn stayed alert for the first wafting note of music that would sing their downfall. 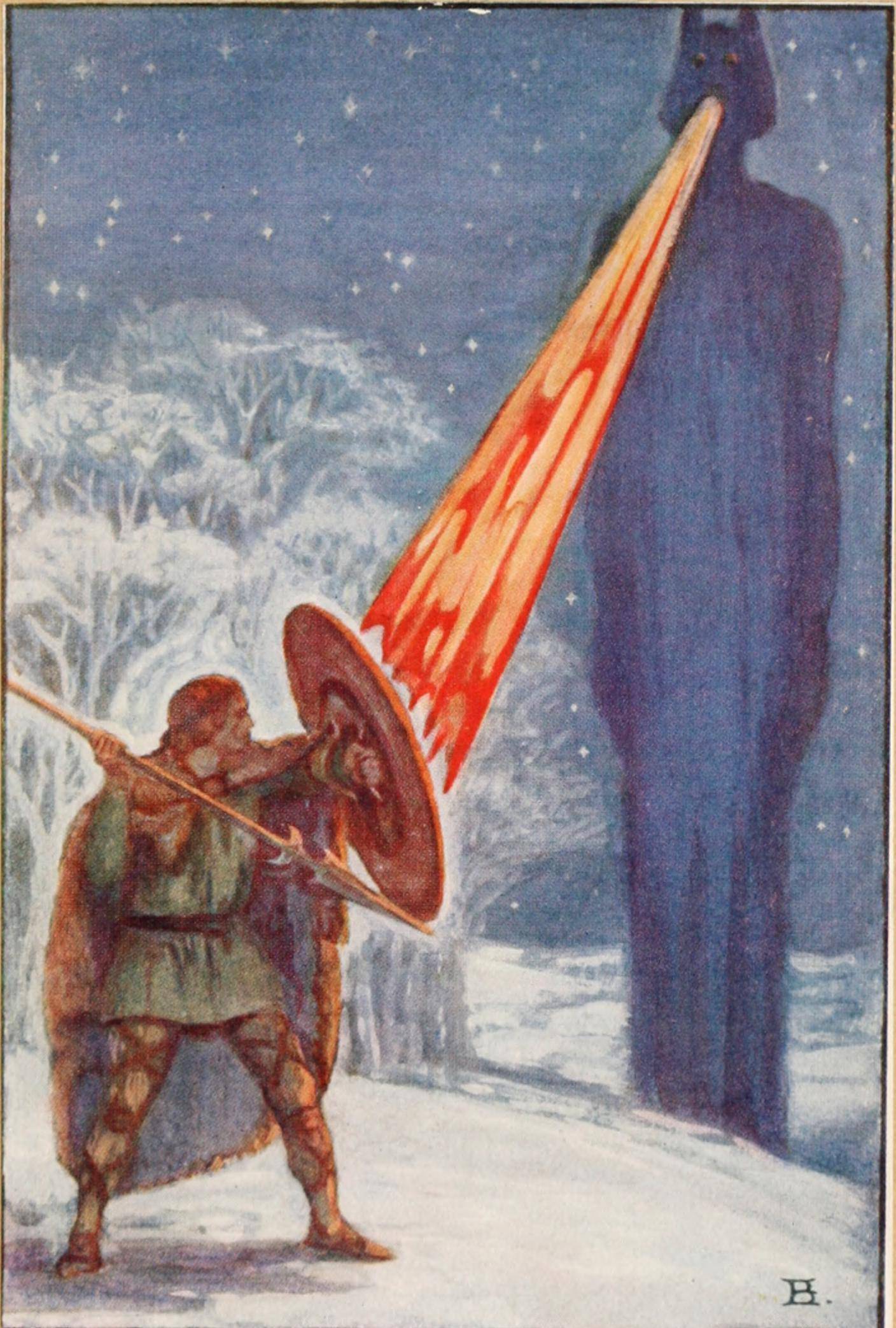 Upon hearing that first twang of the harp string, our fearless hero reached for his spear and plunged it into the crackling flames of a fire, before promptly thrusting it upon his own forehead.

While this might not seem like the act of a man who has been gifted with infinite knowledge, the pain was enough to stave off sleep – allowing Finn to remain awake while all those around him (including the mighty Fianna) slumbered. 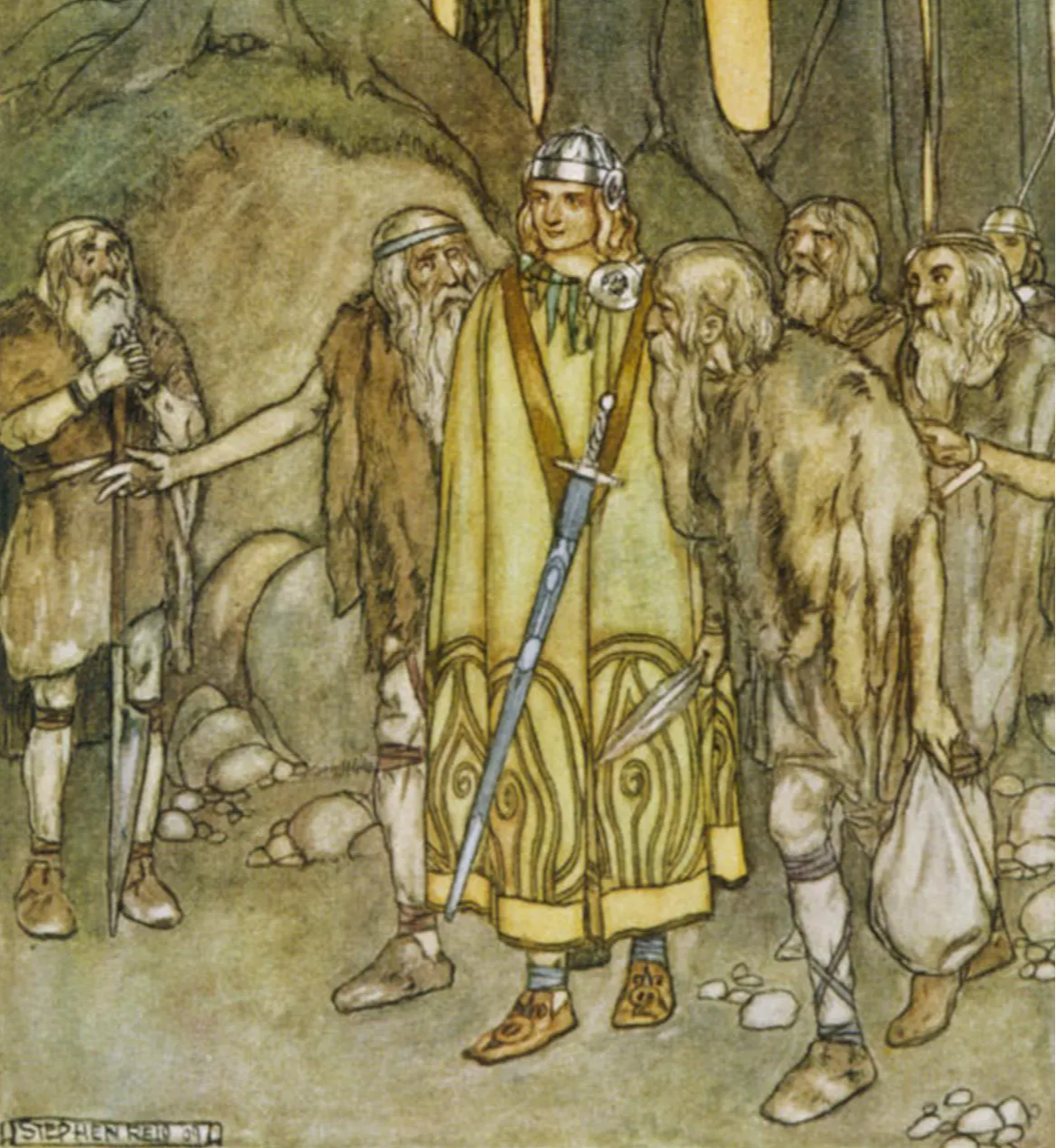 By this point Áillen was in the process of laying down his harp to begin his fearsome tirade upon the land he visited – none the wiser that a human had escaped the clutches of his drowsy ditty. As he closed his eyes and drew his breath, getting ready to expel it with fiery fury, Finn took his chance and leapt at the monster – using the very same spear that had kept him awake to send Áillen to his perpetual sleep.

When the High King and his subjects awoke, they were delighted to see that their Kingdom remained intact, and that the terrible tradition of yore had been broken. Amongst the lively celebrations that ensued, Finn was officially reunited with his birth right as the leader of the Fianna and so began a host of adventures that would cement themselves in Irish folklore.

From the building of the Giant’s Causeway in Belfast, so he could engage in a battle with a giant from across the waters in Scotland, to the rock he threw at that retreating giant’s back which we now know as the Ailsa Craig – you can’t go far in Ireland without experience the influence of Fionn mc Cumhaill. Legend has it that the leader of the Fianna has never succumbed to death, and is merely resting in a cave – guarded by his followers – until the time comes when Ireland needs him once more.

Have you come across this Celtic hero before? Share your favourite Irish legends in the comments below.