Recently we talked about the best Places to Be at Peace on the East Coast, but this time I’m delving into some more active ways to explore this exciting edge of Ireland.

Of course, the sea is beautiful to behold, but she has so much more to offer than simply instagramable backdrops. There is an enormous range of paths that you can take to engage with these fascinating waters, and not all of them involve getting soaked (I can almost hear the sighs of relief!).

Below I’ve listed some of my favourite ways to discover a different side of An Fharraige on Ireland’s east coast - if you’ve tried one of them before, please do share your experiences in the comments below. I love hearing all of your tales of the Emerald Isle!

If you’re not too sensitive to the cold, then Ireland is one of the best surfing spots on the planet. Aside from the choppy waters and impressive swells – the views you get when you’re pointing inland waiting for your next ride are truly spectacular.

Undoubtedly the best surf spot on the East Coast is Tramore in Co. Waterford, which offers everything from beginner’s breakers to wipe-out waves, and is home to Ireland’s oldest active surf club – the T-Bay Surf and Eco Centre.

There are plenty of surf shops dotted up and down the promenade from which you can rent a board and hit the water (don’t forget that wetsuit!), many of which offer lessons for those who are complete beginners or simply need a quick refresher before taking the plunge.

If you want to get in amongst it with perhaps a little more protection from the elements – Sea Kayaking is a wonderful way to roam the treasures of An Fharraige, and once again Waterford is the place to be.

Pure Adventure offers a range of water sports exploring the copper coast and kayaking in particular will take you to a myriad of locations unreachable by land. Weave your way through ancient arches, investigate watery caves and discover hidden coves – all while giving yourself a pretty impressive upper body workout! 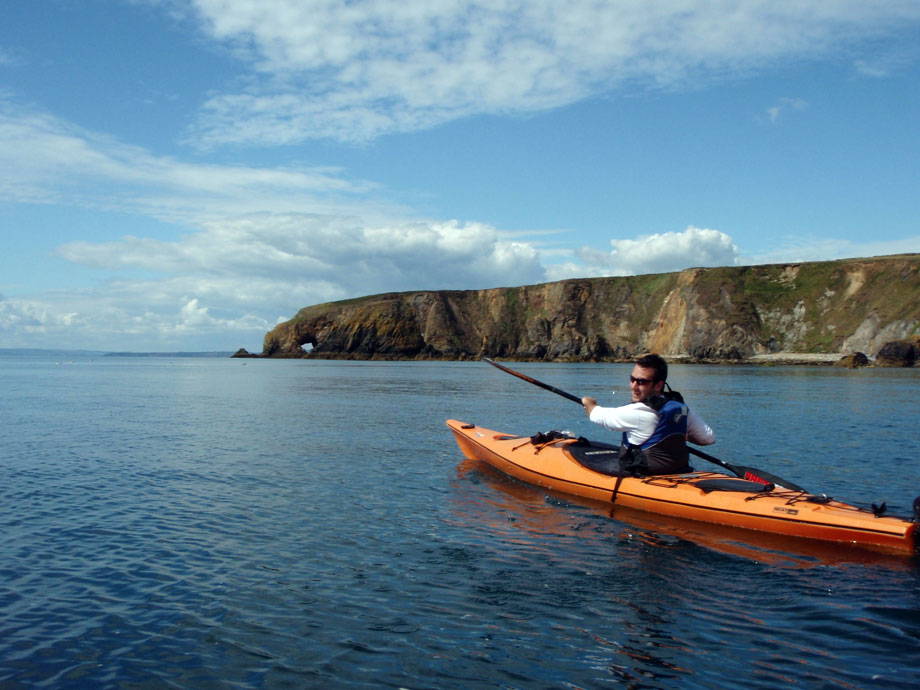 You might even be lucky enough to meet some of the Irish marine life on your journey, with curious seals and even the occasional dolphin popping up to say hello. 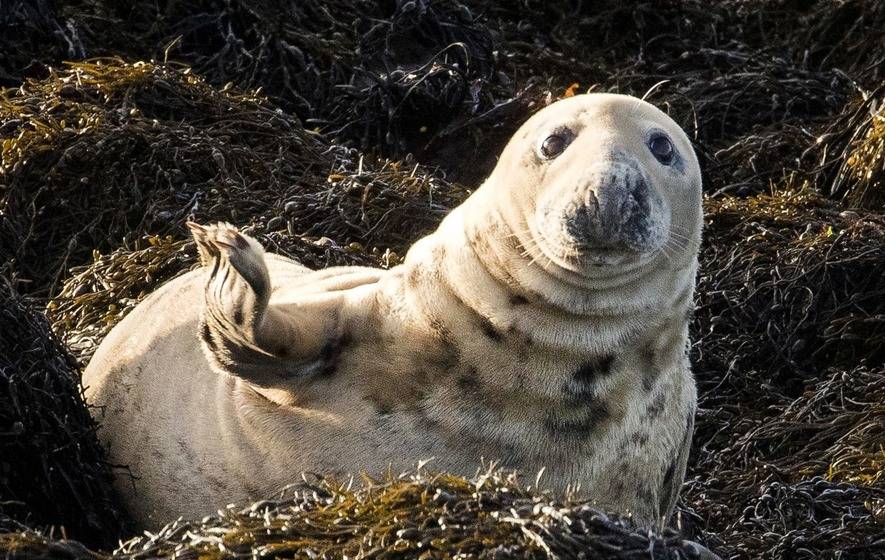 However, if the water-bound critters are your main focus of interest – then you’d perhaps be better off admiring them from the comfort of a speed boat rather than a kayak.

Depending on which particular creature that you’re most keen to clap eyes on – there’s a huge range of boat tours up and down the east coast to choose from. As I mentioned in the “Wildlife of An Fharraige” blog – Cork is an excellent location for whale watching and dolphin discovery, but if you’d rather spy some seals, County Down is where to find them.

Strangford Lough holds the largest population of seals in Ireland, and in the warmer weather it’s a common sight to see them hauling themselves ashore to bask in the sun. Keep an eye out for the fluffy young pups, who start to appear between May and September.

Of course, sometimes to see the most fascinating creatures on the coast we have to cast our eyes up to the skies, where Ireland’s bird population soar over both land and water.

While there are plenty of species to spot on the mainland, there are several islands floating off the east coast which are havens for bird watchers. Ireland’s Eye in particular gets a good rep, for both its scenic surroundings and avian population.

Just a 15-minute ferry ride from Howth Harbour (near Dublin) will bring you to this beautiful, uninhabited refuge which is home to an astonishing range of seabirds - including gannets guillemots, and puffins. Watch as they dart across the rocks in front of you, swoop overhead in search of food, or nestle together on the impressively free-standing vertical rock face known as ‘The Stack’. 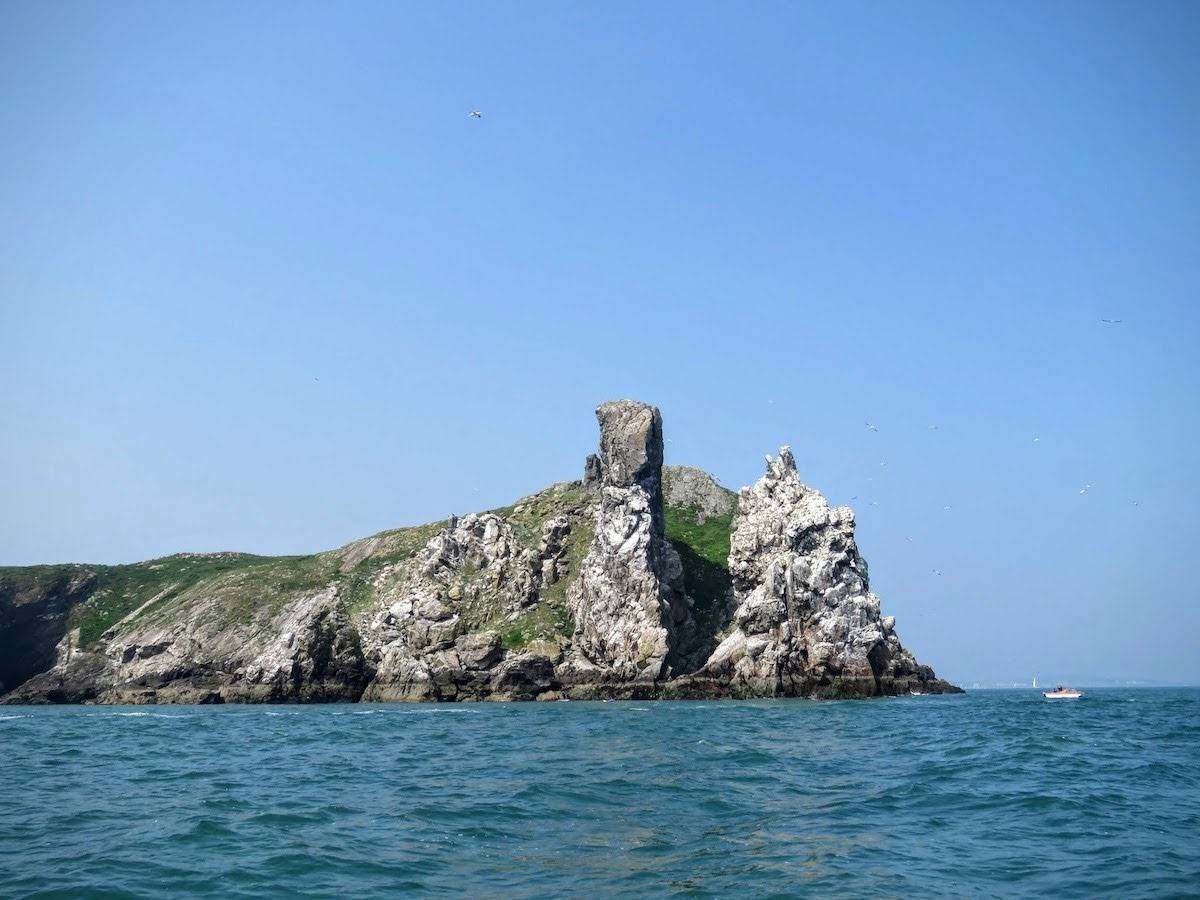 The only sign of any kind of human residence on the island comes in the form of a ruined Martello Tower which was built back in 1807. Today it’s definitely the birds that rule the roost, but they don’t seem to mind the occasional binoculared visitor stopping by to admire their home. 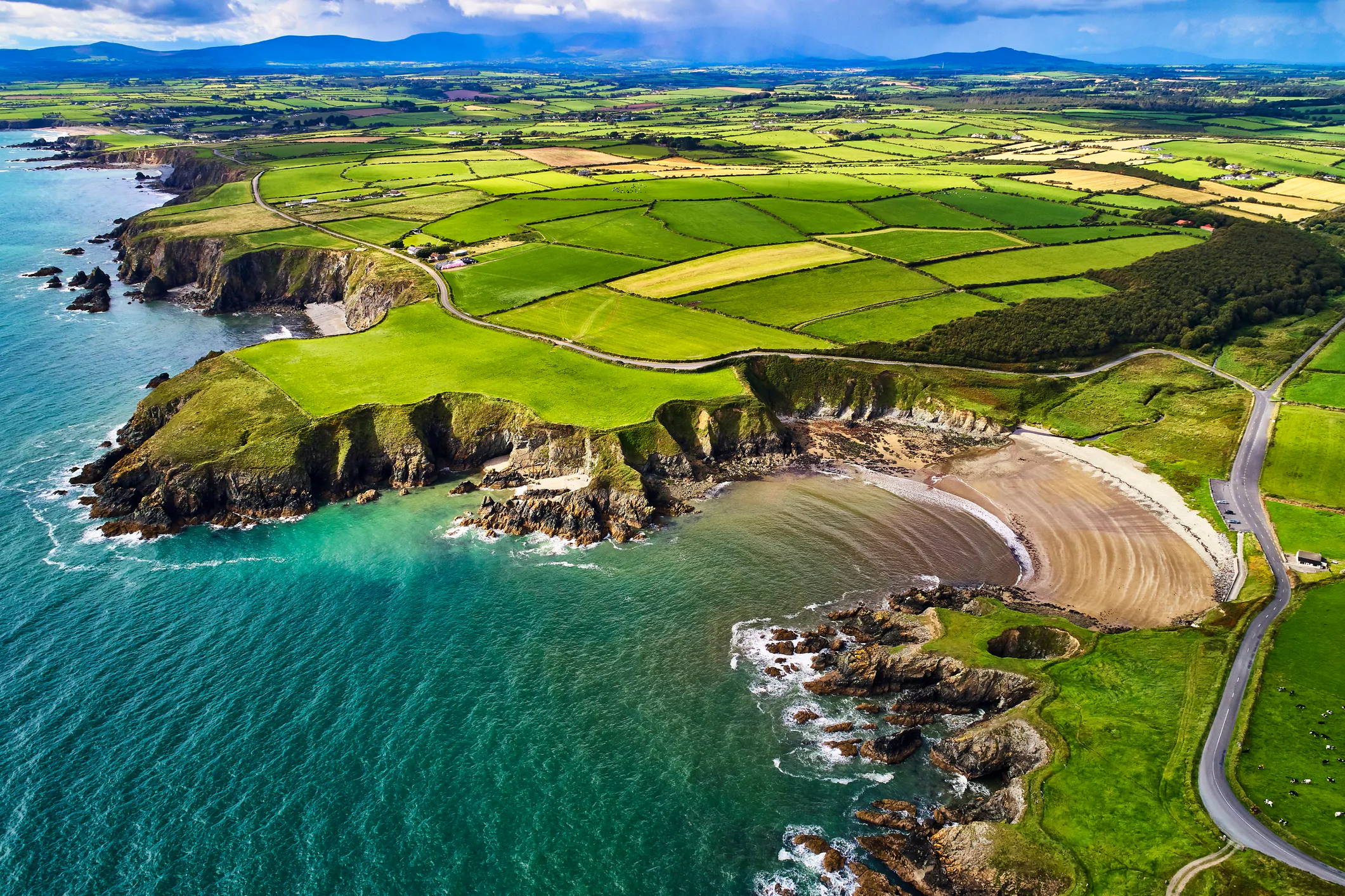 If it’s more of a bird’s-eye view that you’re after rather than a view of birds – there can be no beating a helicopter ride across the Copper Coast.

Adventure 001 allows you to see An Fharraige like never before as you glide over the rolling waves, dramatic cliffs and golden beaches of Ireland’s east coast - admiring the breath-taking scenery from a completely new perspective. Aside from the exclusive vistas, the whole experience of being in a helicopter is definitely a bucket list activity, and where better to tick it off than over the stunning Emerald Isle?

Just remember to take your camera to snap up all the glorious views so you can share them with all of your ground-bound friends when you touch back down on land.

When it comes to bike rides, you’re spoiled for choice along the vibrant east coast of Ireland but one of my favourites has to be the Waterford Greenway.

The full route stretches across some 47km and it’s a fascinating trail which runs through an old railway, stunning viaducts and the Comeragh mountains. While this is a power of pedalling for a day’s work, if you’re a frequent cyclist you won’t find the journey from Waterford to Dungarven too taxing, as it’s mostly flat ground that you’ll be travelling along. 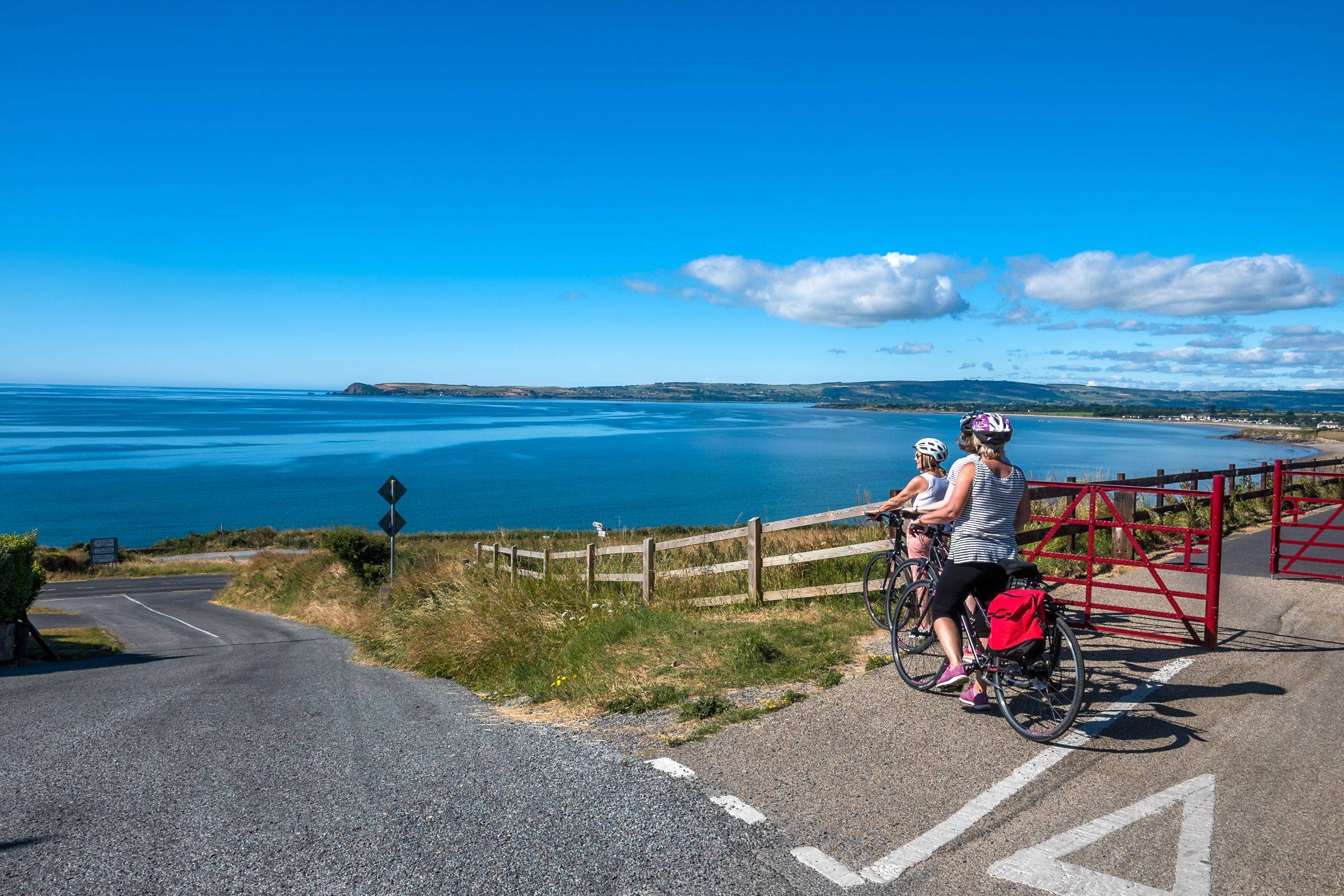 The Waterford Greenway Bike Hire, allows you to hire bikes at various points along the route and offers to collect them when you are finished– meaning you can cycle for as long or as little as you like. However, if you’re only going to take in part of the trail, I strongly recommend starting at Dungarven which features the most picturesque seaside views. 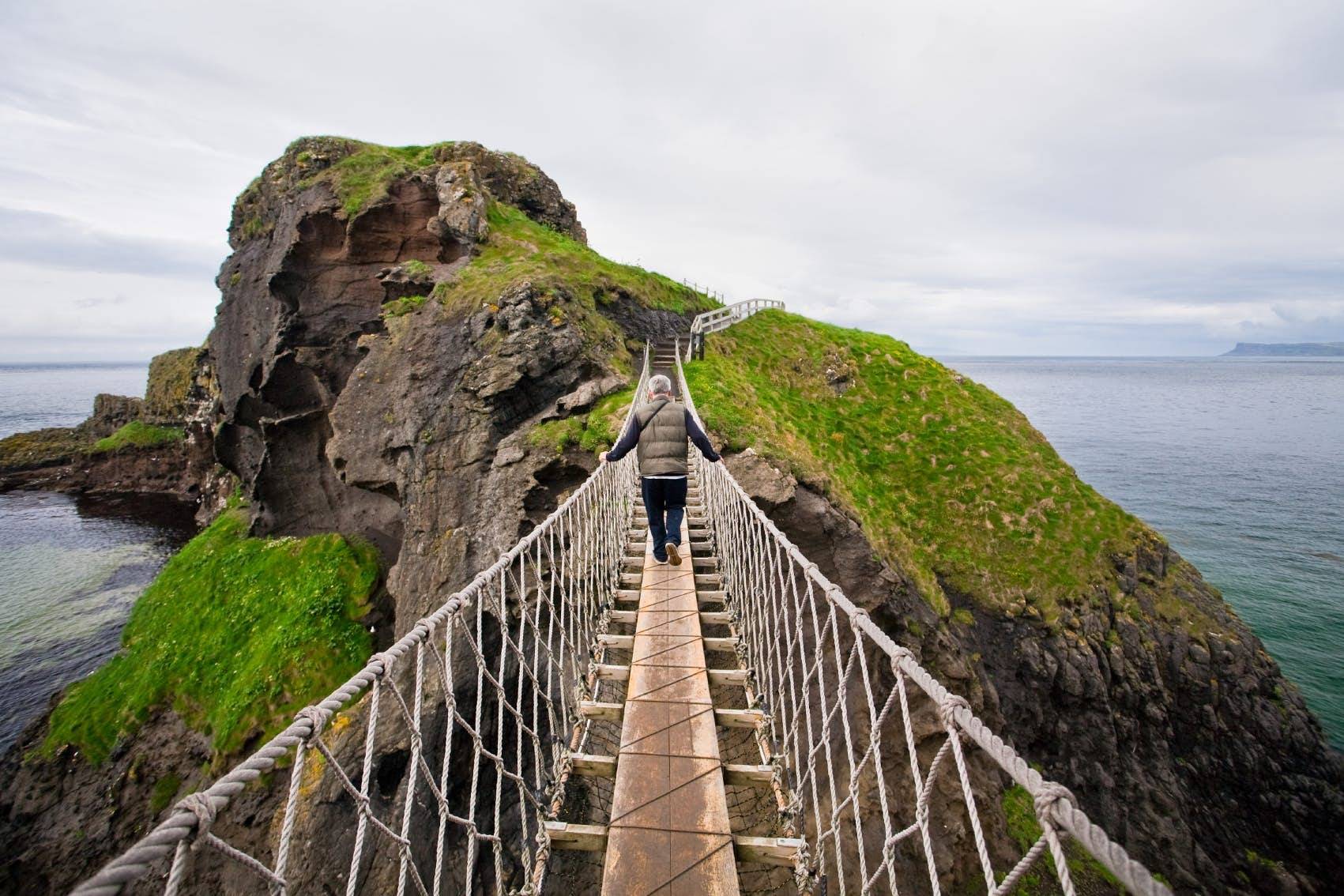 A trip to Carrick-a-Rede is probably the closest you can feel to An Fharriage without actually plunging yourself into it.

The miniscule island is linked to the rest of Co. Antrim by 20 metre rope bridge which hangs 30 metres above the rocks and sea it crosses. Braving the bridge is sure to give you a buzz of adventure (while being perfectly safe of course), and you’ll be rewarded with the most extraordinary views from the other side.

Fishermen have been catching salmon around the island since 1620, with the first bridge being built in around 1755. The connection has been reconstructed and modified many times since then – with the current tourist friendly version that you cross today being opened in 2008.

Sadly, due to a number of environmental factors, salmon no longer frequent the island, and the last fish was caught there in 2002. However, visitors can hark back to the former ways of the lively fishery with a visit to the fisherman’s cottage which has been preserved so as to share its heritage with future generations.

What’s your favourite activity to partake in once you reach the coast? Do you have to travel far to connect with the sea in your own hometown? Let us know in the comments below!